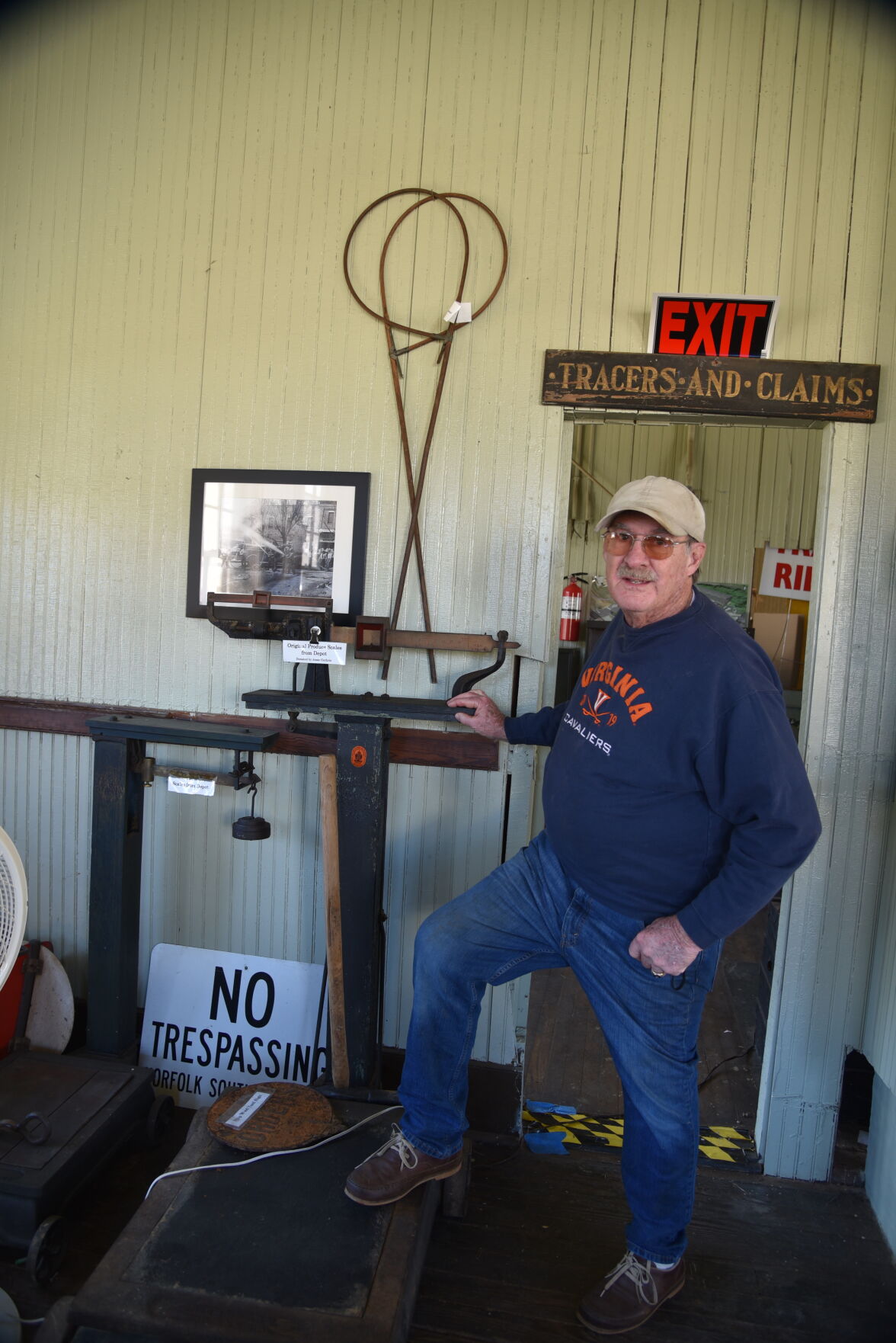 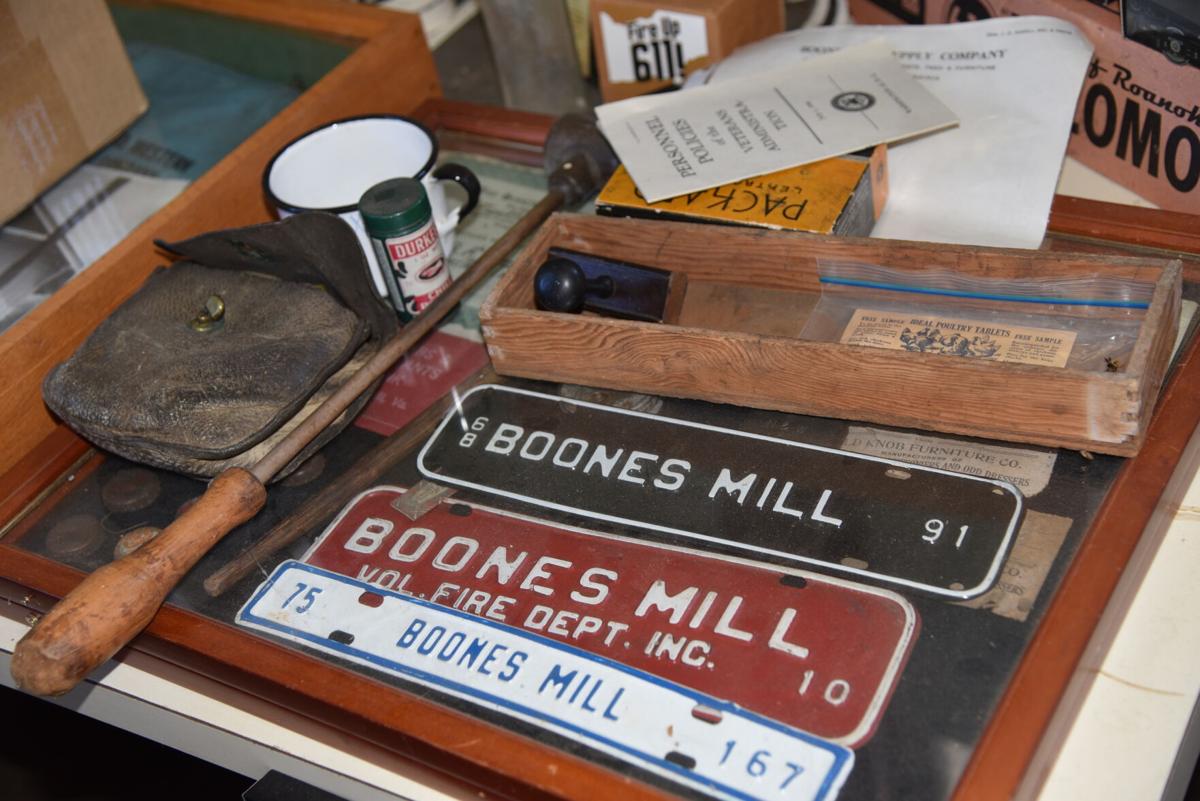 Numerous items have been donated to be on display at the Boones Mill train depot. 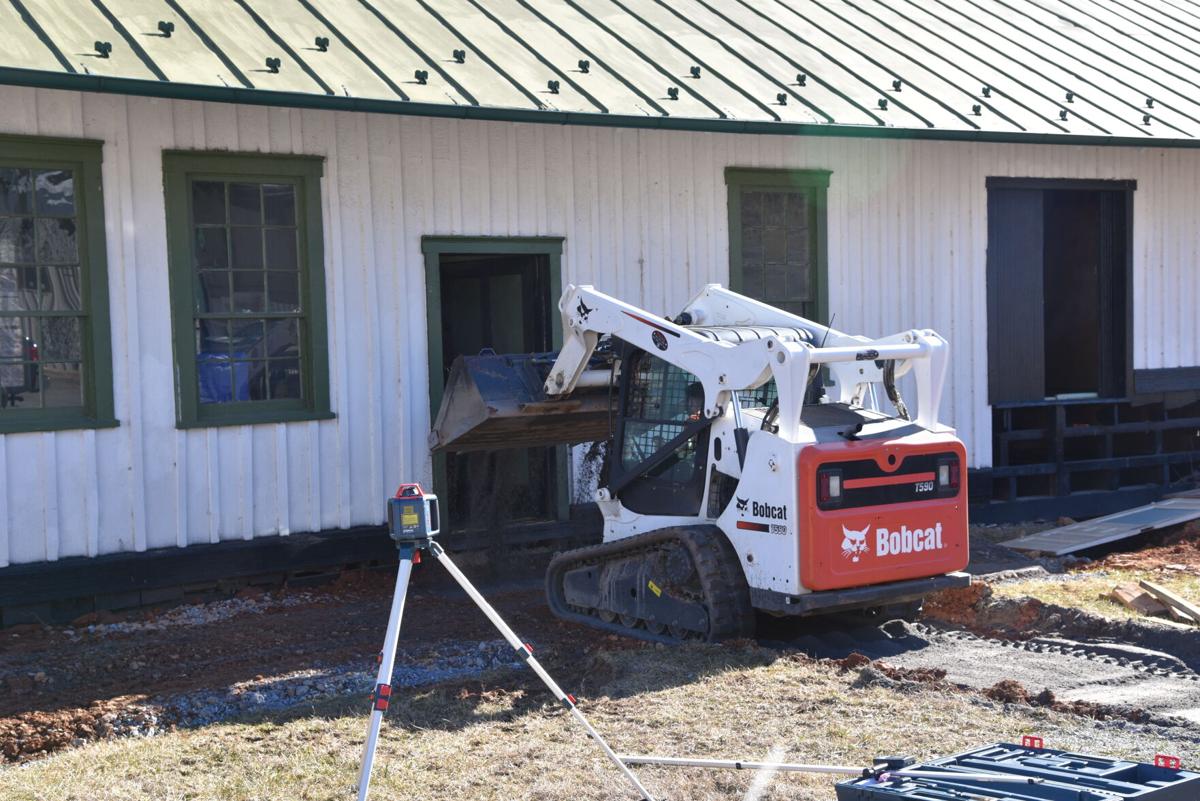 Shane Mize of SM Excavations & Hauling spreads cinder gravel on a path leading to one of two ADA-compliant entrances to the Boones Mill train depot.

The Boones Mill train depot, once rescued from demolition and moved to its permanent home near Boones Mill Town Hall, took another step closer toward completion on Wednesday.

“This is the most progress we’ve made in over a year,” said B.T. Fitzpatrick, Boones Mill town manager and a member of the Boones Mill Depot Restoration Committee. “I’d love to have it done by summer.”

On Wednesday afternoon, contractor Todd Setliff of TAS Design Inc. and Shane Mize of SM Excavations & Hauling worked on excavating the area around the depot that will become a deck and walkway with two ADA-compliant entrances.

“Getting the holes dug and the footers in place, that’s a huge step forward,” Fitzpatrick said.

Weather permitting, Fitzpatrick said, concrete is scheduled to be poured for the walkway on Monday.

The project has been a labor of love for members of the restoration committee, including Mike Smith, a member of Boones Mill town council, and Jerry Greene, whose grandfather, Digby Greene, served as station master of the depot from 1927 until his retirement 30 years later.

“These two are the movers and shakers behind this project,” Fitzpatrick said of Smith and Greene.

Preserving the history of railroading, the depot, as well as Boones Mill and Franklin County, are why Smith and Greene are so passionate about seeing the project finished.

Greene recalls growing up in the depot during his grandfather’s tenure as station master. “My granddad babysat me, so to speak,” he said.

Often when his mother and sisters would go shopping in Roanoke, Greene said he would ask her to drop him off at the depot so he could hang out with his grandfather.

“We just had a good time together,” Greene recalled.

Before the station had telephones, Morse code was the preferred communication method, Smith said. As a 10-year-old Boy Scout learning Morse code, Smith fondly remembered Digby Greene letting Smith use it to send a message to Roanoke.

Built in 1892, the depot served as a major hub for not only passengers, but also cargo, including tomatoes, milk, apples and pulpwood.

“Everything came out of here,” Smith said.

Once the walkway is finished, work will begin to build the decks leading into the depot. Smith is hopeful that there are area carpenters who would be willing to donate their time to help with deck construction.

Inside, the building will be restored to what it once was, including setting up Digby Greene’s office as before.

“We’re going to keep it strictly, strictly original,” Smith said. “We’ve got a lot of things that’s been donated to us.”

One of those donations takes up nearly the entire freight side of the depot. It’s a 15-foot by 28-foot train layout donated two years ago by former Moneta residents Jim and Ginny Mathie. The layout includes a custom backdrop mural featuring mountains and water, locomotives, transformers, buildings, vehicles and miniature people figurines.

Other items original to the depot include a wooden desk, a 1,200-pound scale used to weigh cargo, and a safe.

Following completion of the decks and walkway outside, the depot’s restoration committee hopes to host live music concerts this summer, and eventually be able to rent the space for meetings, weddings and other special events.

Make the Holidays Easier For Sober Friends and Family

Make the Holidays Easier For Sober Friends and Family

The latest book to be penned by Linda Kay Simmons is not an easy read. She admits it is actually quite dark. It is a “fictionalized memoir.” F…

Transportation improvements should reduce tractor-trailer traffic on the interstate, the U.S. senator said.

On Saturday, Dec. 11 from 3-5 p.m., the SML Parrot Pan and Toucan Pan Steel Drum Bands will present lively island renditions of many Christmas…

The gift of yoga

Numerous items have been donated to be on display at the Boones Mill train depot.

Shane Mize of SM Excavations & Hauling spreads cinder gravel on a path leading to one of two ADA-compliant entrances to the Boones Mill train depot.