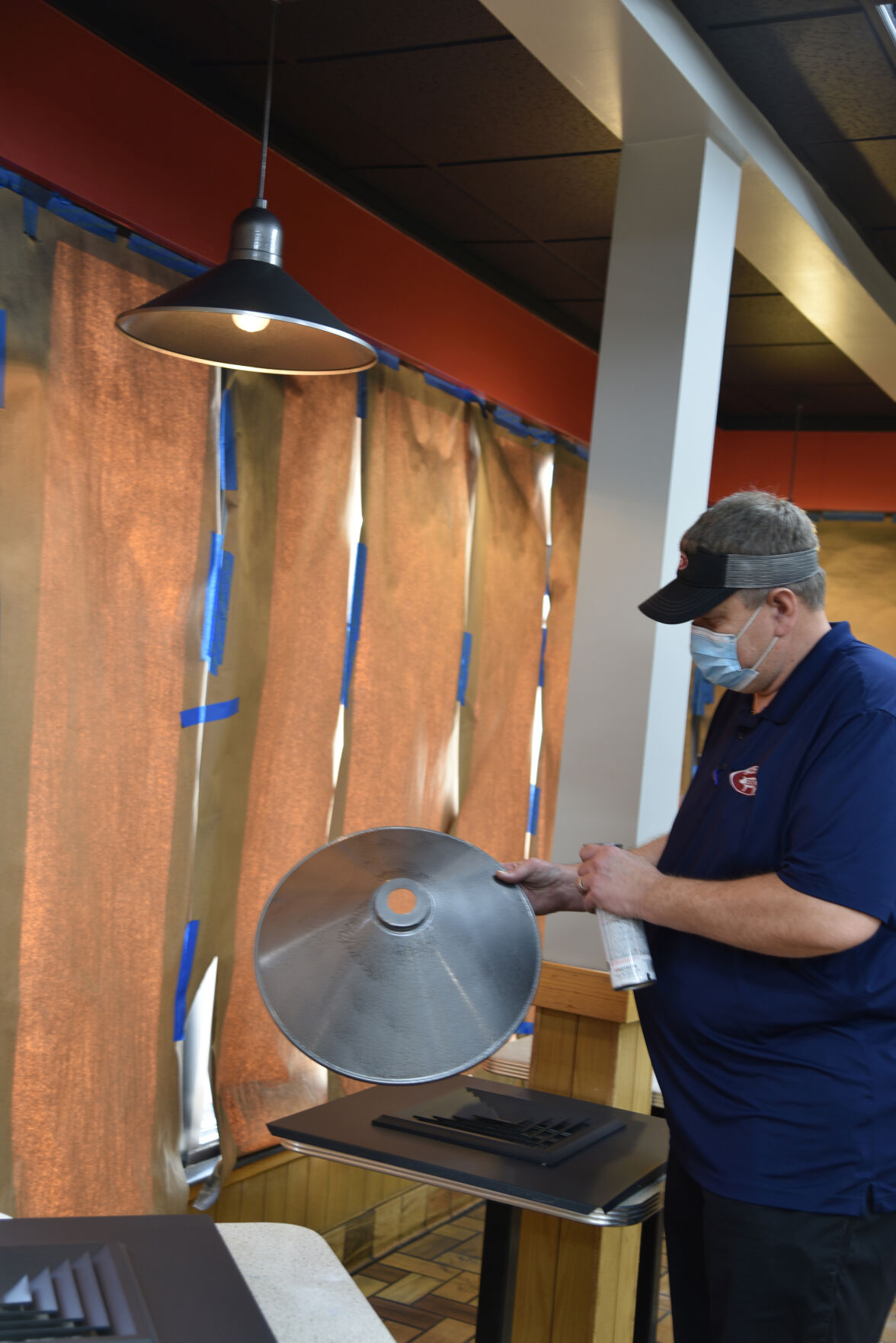 Allen “Buddy” Hancock, owner of Buddy’s BBQ, holds one of the lighting fixtures similar to the one hanging. Hancock recently announced his restaurant will be moving to 480 Tanyard Road, which once was a Hardee’s fast-food restaurant. 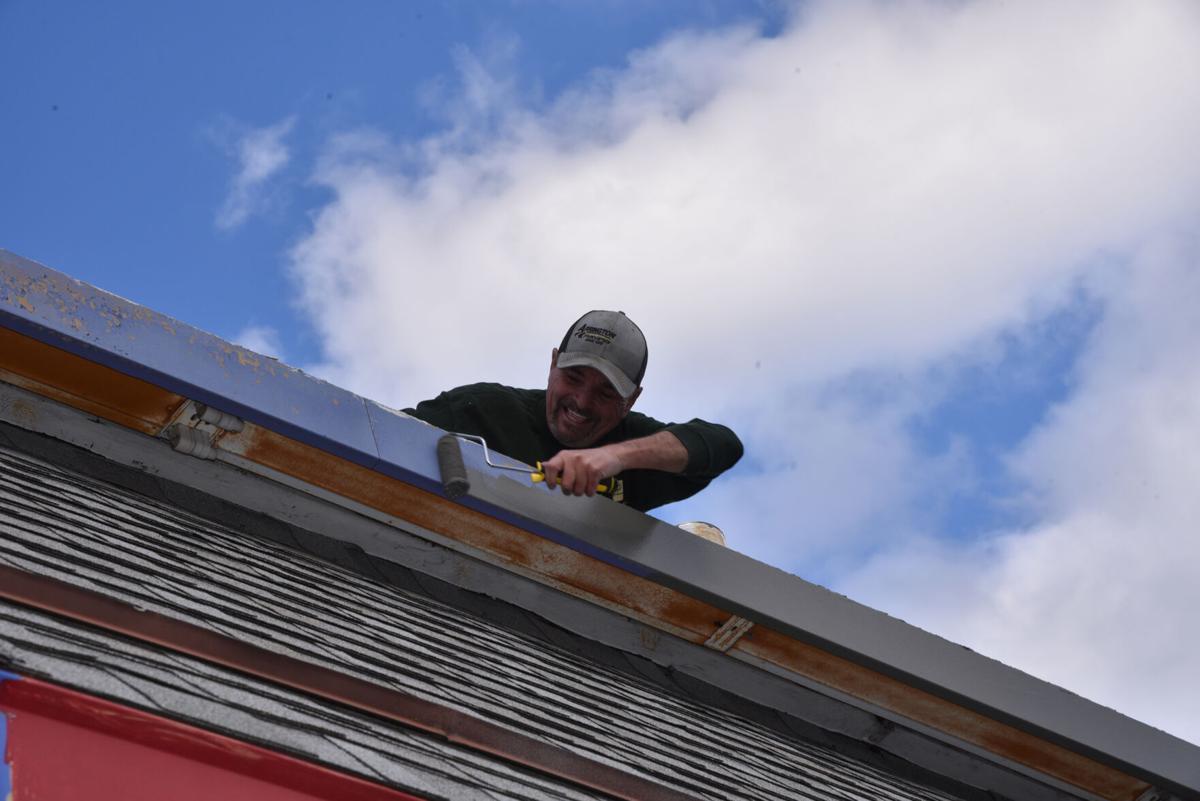 For the past several weeks, Allen “Buddy” Hancock has been working overtime. In addition to serving up his North Carolina-style barbecue at Buddy’s BBQ in Rocky Mount Plaza, Hancock also has been busy helping with renovations to what will become the restaurant’s new home.

In late January, Hancock announced to Buddy’s BBQ fans on Facebook what was happening to the space at 480 Tanyard Road, which once was a Hardee’s fast-food restaurant.

“Okay, everyone, we can now proudly say we are officially moving locations in the coming months!!!” The Jan. 29 post received more than 1,600 likes and was shared more than 520 times.

In just over three years, Hancock’s business, which includes the restaurant, a catering business and a food truck, has grown by leaps and bounds.

But when the COVID-19 pandemic hit last March negatively impacting restaurants, including Hancock’s, he wasn’t sure if his business would even survive.

“Last March, I was worried about being able to stay in business due to the pandemic, but your support was truly an inspiration to me and my family,” Hancock wrote in that Facebook post on Jan. 29.

Just a few months later, business did rebound, and, according to Hancock, it’s never been better. “We showed growth throughout the whole thing.”

Realizing that the 1,200-square-foot space was no longer feasible to handle the volume of food orders, Hancock signed a lease on the former Hardee’s restaurant building, which is just about a half-mile away from his current restaurant.

“The building had good bones,” Hancock said. “We’re going to have twice the kitchen space and almost four times as much space for dining.”

While he has plans to change the aesthetics of the space, Hancock said he likely will keep the existing seating arrangement. Outside, plans are in the works to add an L-shaped patio for additional covered and uncovered seating and a stage for live music.

“It’s going to be pretty neat,” he said.

Servers, he said, will be hired to wait on diners, which will “double, if not triple” his current staff size of 15.

The restaurant’s color scheme will include red to reflect Hancock’s dedication to supporting the Franklin County Eagles. “We want to keep with the high school colors and kind of tie into that,” he said.

As painters darted in and out of the space that afternoon, Hancock pointed out that he’s hired only local contractors, including Joey Hodges Painting, R&D Landscaping, Walter Gould of Gould’s Enterprise Pressure Washing, Layman Electric & Plumbing, Davis Heating & Air and Greg Davis for the remodeling.

The kitchen space already came equipped with what is needed to operate, including ample storage. “I don’t have places to put things,” he said of the space he’s in now. “That’s kind of been our hindrance.”

Plans include adding another deep fryer, bringing the total to four (he started the business with two). “We get a lot of orders, especially for fried foods,” he said.

He’s also adding a new smoker to his arsenal while keeping his original one. “It’s massive,” Hancock said.

Since he signed the lease on the building, Hancock said, “Everybody’s asked me if we’ll have a drive-through.” The answer is no. That’s because Hancock said his is not a fast-food business, and everything served is made to order.

Most of all, Hancock said he is grateful for the support from the community and is hopeful for opening the new space in late spring.

“The community has done this, not me,” he said. “It’s not possible without them. It’s humbling. I’m grateful for them to support us like this. I can’t say it enough.”

The raises are a key provision of the county's first budget forged on the rebound from the COVID-19 economic crisis. Meanwhile, supervisors discussed growing concerns over public safety funding.

Allen “Buddy” Hancock, owner of Buddy’s BBQ, holds one of the lighting fixtures similar to the one hanging. Hancock recently announced his restaurant will be moving to 480 Tanyard Road, which once was a Hardee’s fast-food restaurant.