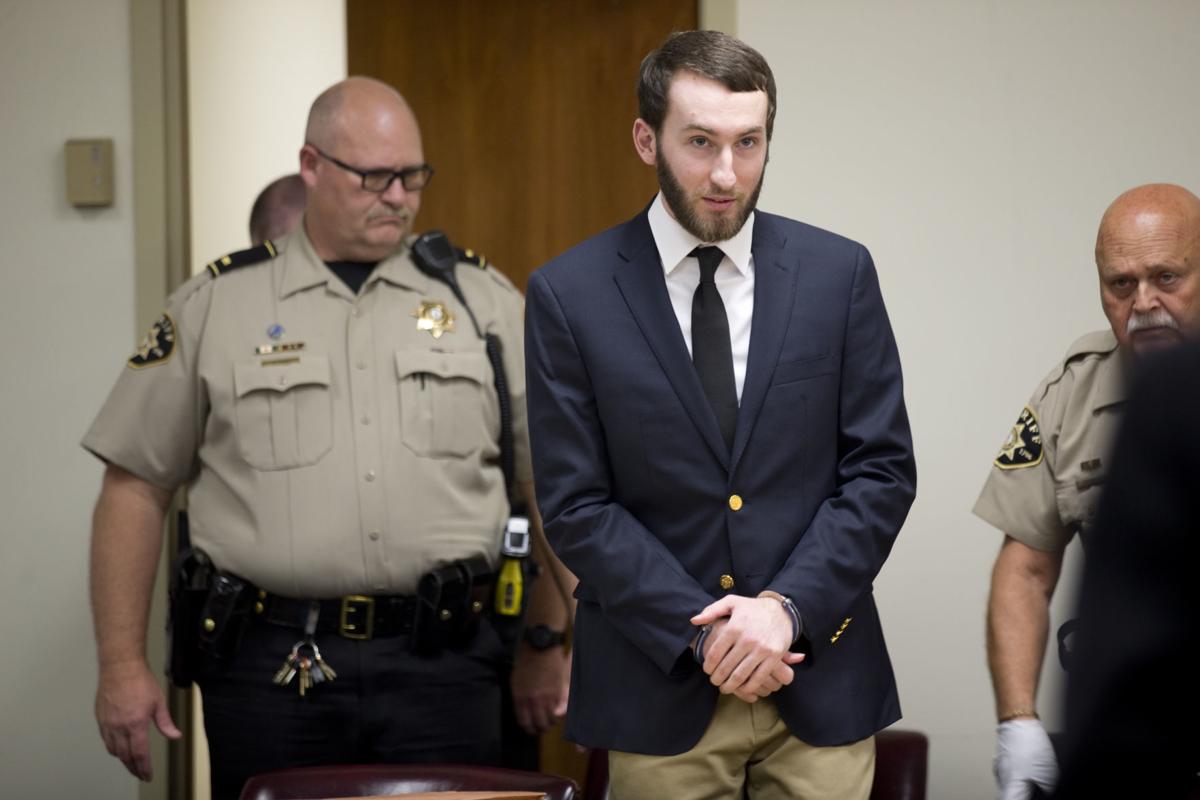 Michael Alexander Brown is escorted into Franklin County General District Court for a preliminary hearing on charges he shot and killed his mother’s boyfriend, Rodney Brown. After the slaying, he was the subject of a multi-state manhunt that lasted nearly three weeks. 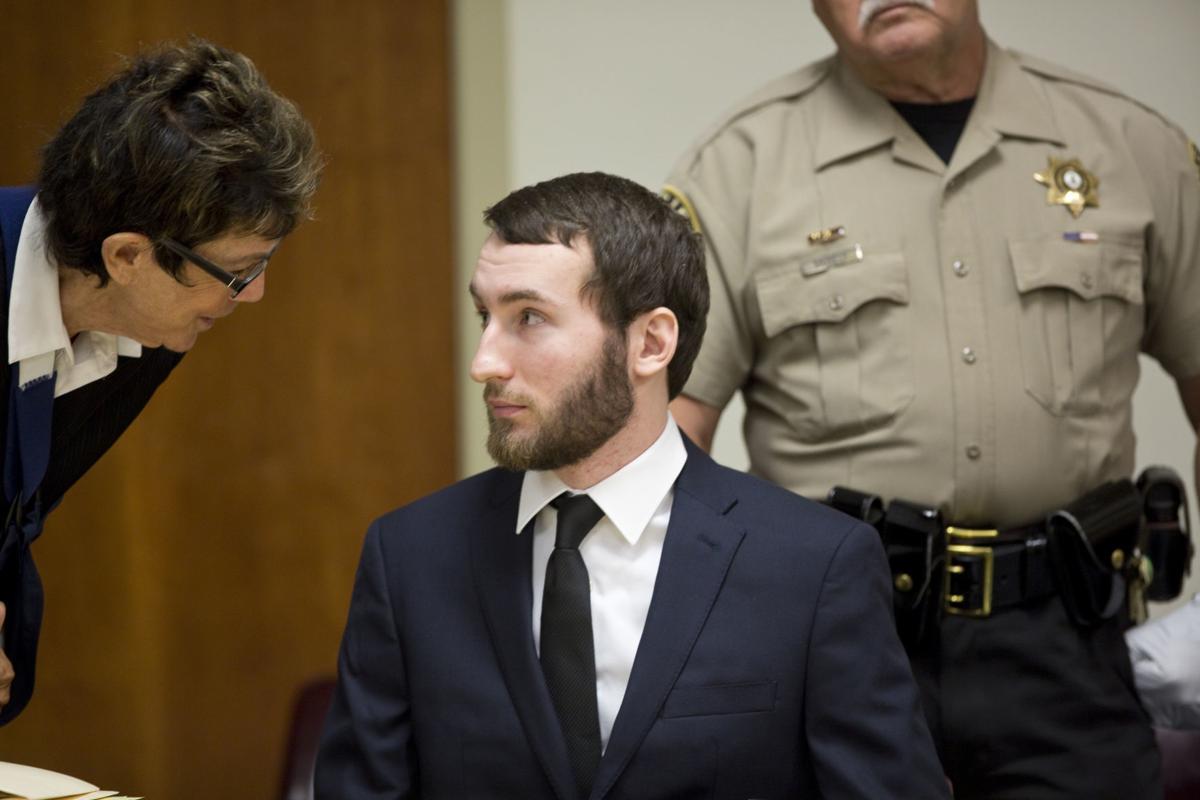 Deborah Caldwell-Bono confers with her client, Michael Brown, during his preliminary hearing Wednesday in Franklin County General District Court. He is charged with murder in the 2019 death of his mother’s boyfriend. 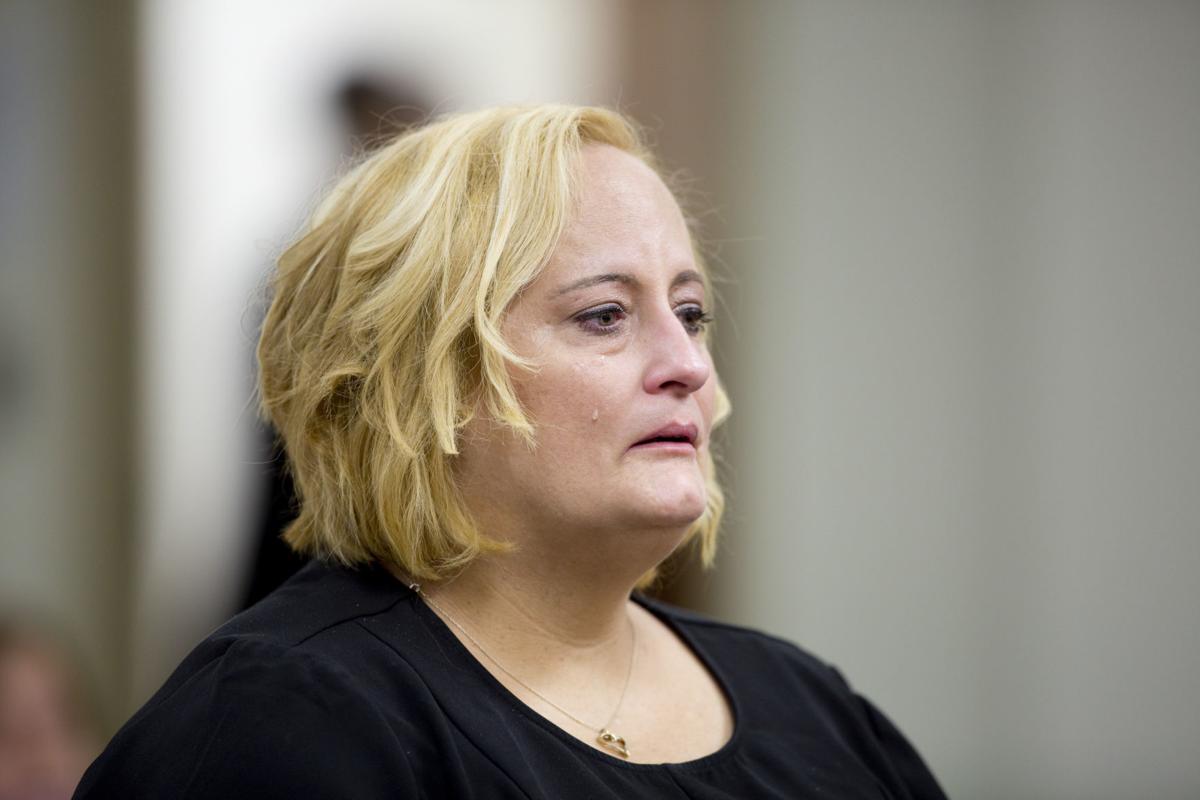 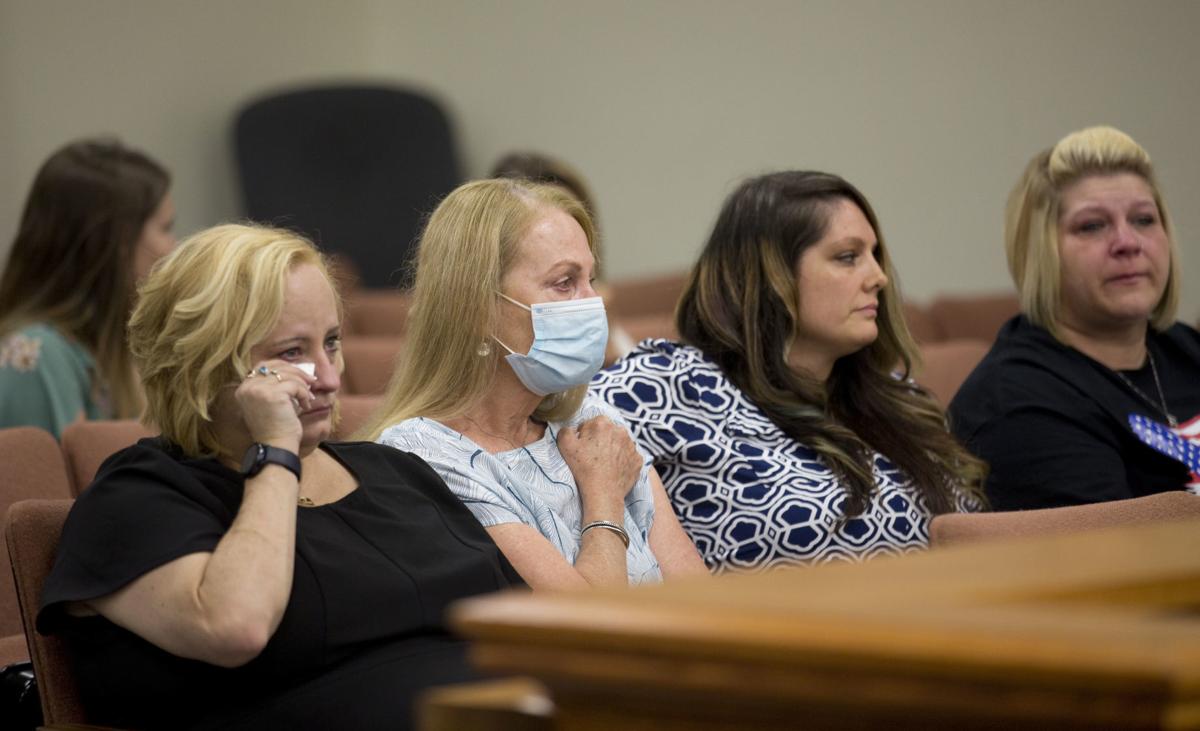 Vanessa Hanson (left), Michael Brown’s mother, is seated in the courtroom with family members before the start of his preliminary hearing on Wednesday.

A Franklin County homicide case, one with an extensive profile but not much definition, gained deeper and more provocative shadings Wednesday at a preliminary hearing for Michael Alexander Brown.

Brown, who is accused of shooting and killing his mother’s longtime boyfriend on Nov. 9, became the target of an 18-day multi-state manhunt last fall. He was finally taken into custody back at the crime scene on Nov. 27, hiding in the attic at the Hardy home of Rodney Wilfred Brown, the man he’s accused of killing.

Once Michael Brown was in custody, very little new information came to light and the case saw lengthy delays as the coronavirus set in.

Wednesday’s hearing, almost eight months after his arrest, marked Brown’s first courtroom appearance. The 22-year-old Marine corporal appeared in a jacket and tie, handcuffs and leg irons, as deputies brought him into general district court. Brown smiled and nodded warmly to his mother and to friends and relatives seated near the front row of the gallery, but made no statements during the hearing.

Judge George Jones heard witness testimony, from investigators and from Brown’s mother, for a half-hour before certifying the two counts Brown faces: second-degree murder in Rodney Brown’s death and use of a firearm to commit a felony.

Franklin County Commonwealth’s Attorney A.J. Dudley said Rodney Brown, 54, died from three gunshot wounds to the head and five to the torso, adding that forensic examination of the slugs removed from the victim’s skull showed that at least two different firearms had been used in the attack — a .22-caliber pistol and a rifle.

Prosecutors called Michael Brown’s mother, Vanessa Hanson, to testify. She recounted that the day of the shooting, a Saturday, had previously been uneventful, with just her and Rodney Brown at his Woodthrush Circle home. She was watching TV while he worked on her car, Hanson said, but then she heard a “loud cracking sound, like a board being broke or something.” She said she thought it was a prank by her boyfriend, but when she went outside she found Rodney Brown on the ground, then was startled to see her son Michael standing near, holding a rifle and a pistol with a silencer.

Hanson said that after shooting, she tried to call her mother but Brown pointed his gun at her and made her give misleading information on the call. He had her bag up all the phones in the house and, before he fled with the devices, told her not to seek help for three hours.

“The Michael you saw that day was not your Michael?” defense attorney Deborah Caldwell-Bono asked. “Correct,” Hanson said, and agreed with Caldwell-Bono’s assertions that he’d had an unhinged look in his eyes that day. She acknowledged he’d also behaved very unsettlingly when she saw him the week before, on Halloween, when he told her “he wasn’t Michael anymore.” She claimed her son had threatened then that he would hurt Rodney Brown if her boyfriend beat her again, but said her son had never indicated he would actually kill the older man.

Caldwell-Bono’s additional questions about abuse were blocked by Dudley’s objection.

In a stipulation agreement between the prosecution and defense, Dudley told the judge that a Virginia State Police agent had been present Nov. 27, when Michael Brown emerged from an attic crawlspace at the Woodthrush Circle residence with a .22-caliber handgun. Caldwell-Bono further stipulated that Brown negotiated a surrender with police that day, warning law enforcement that he had a book in his possession and, if he could not keep it with him in custody, he would kill himself. He was allowed to keep it. After the hearing, Caldwell-Bono declined to say what the title of the book was or describe the nature of it.

Hanson in her testimony told Dudley that Michael Brown is not the biological son of Rodney Brown. She also acknowledged to Caldwell-Bono that she had twice in the past been treated for schizoaffective disorder, requiring two separate eight-year hospitalizations. Hanson told Caldwell-Bono that during her second stay, Michael and her younger son had lived with Rodney Brown.

Michael Brown’s case will be taken up at next month’s grand jury session, on July 6.

In mid-October, in the days prior to the shooting, Brown went AWOL from his post at Camp Lejeune in North Carolina, where he was a combat engineer with the 8th Engineer Support Battalion. Witnesses spotted him in Franklin County in early November, but he vanished after the attack.

During the search for him, police located multiple vehicles he’s believed to have used, including a large RV found abandoned in Roanoke on Nov. 14. The vehicle, found in a church parking lot near Carlton Road, carried seven handguns, two rifles and an assortment of ammunition, according to an inventory filed by investigators.

Law enforcement reported seizing more than 70 items ranging from gloves and a necktie to night vision goggles and a ghillie suit.

A stack of more than 55 search warrants, unsealed in Franklin County Circuit Court in February, showed the exhaustive lengths investigators had gone to to try to track Brown as a fugitive, through his phones, electronic tablets, credit history, social media profiles, even his Netflix and Hulu accounts.

Another warrant showed that some of Rodney Brown’s financial paperwork had been found in the RV — a point that seemed to tie into another revelation that Rodney Brown had withdrawn a large, unspecified sum of cash from the bank the day before he was killed. But during Vanessa Hanson’s testimony, she said her son’s possession of Rodney Brown’s account statements was simply an accident.

Michael Alexander Brown is escorted into Franklin County General District Court for a preliminary hearing on charges he shot and killed his mother’s boyfriend, Rodney Brown. After the slaying, he was the subject of a multi-state manhunt that lasted nearly three weeks.

Deborah Caldwell-Bono confers with her client, Michael Brown, during his preliminary hearing Wednesday in Franklin County General District Court. He is charged with murder in the 2019 death of his mother’s boyfriend.

Vanessa Hanson (left), Michael Brown’s mother, is seated in the courtroom with family members before the start of his preliminary hearing on Wednesday.