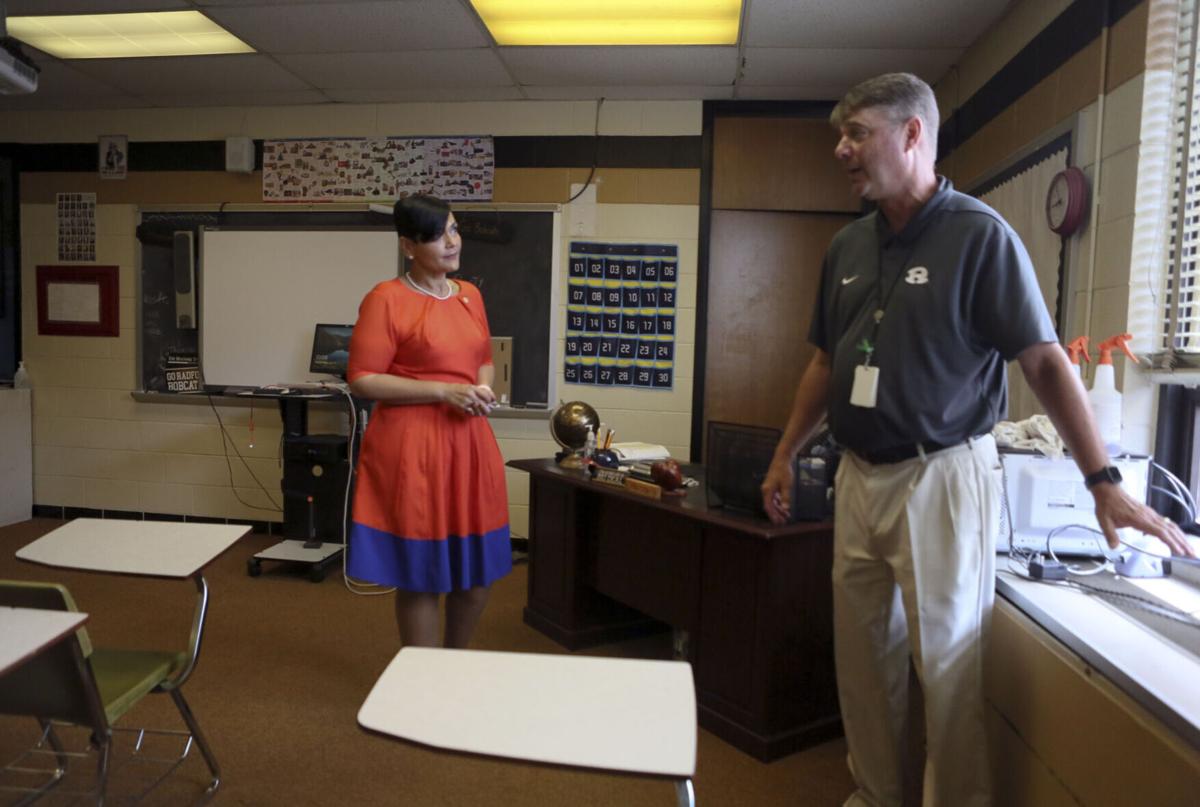 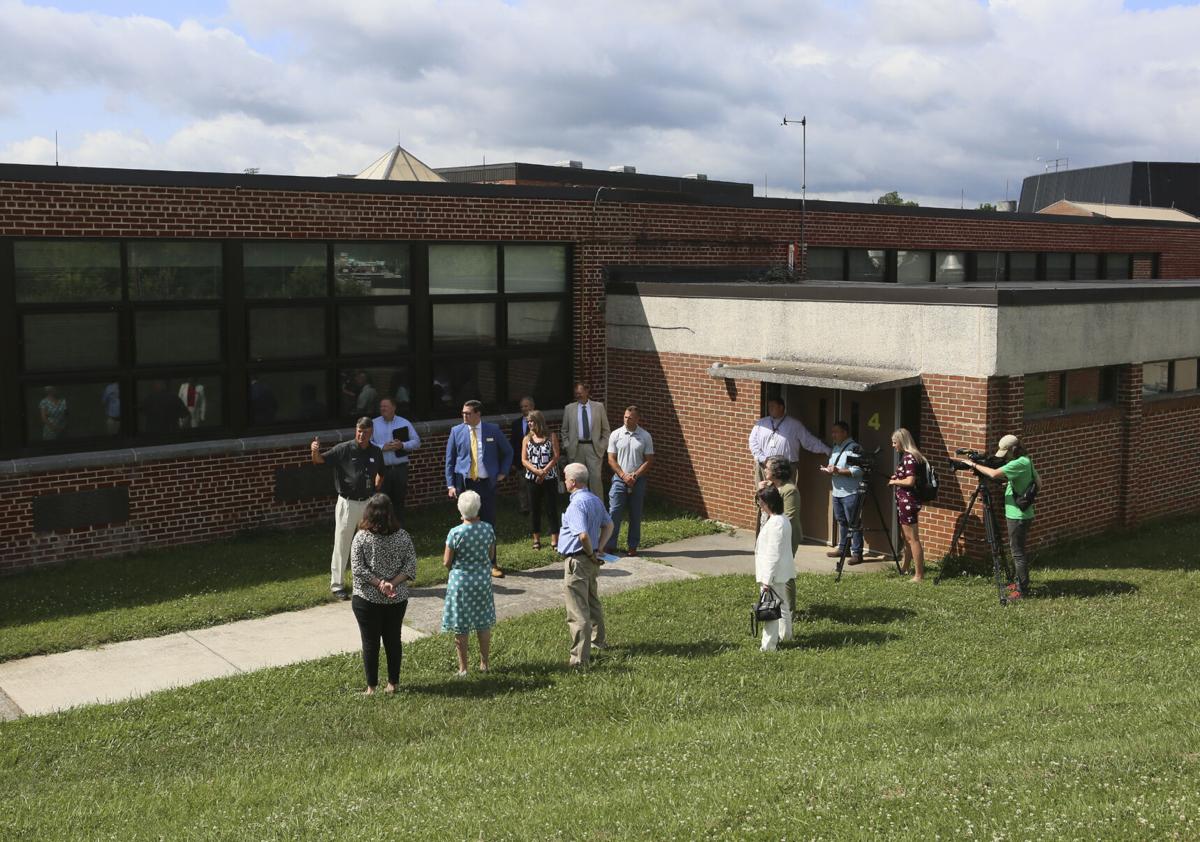 Radford school Superintendent Rob Graham led a tour of Radford High School, which was built in 1971, as part of the Region 7 Crumbling Schools Tour Wednesday. 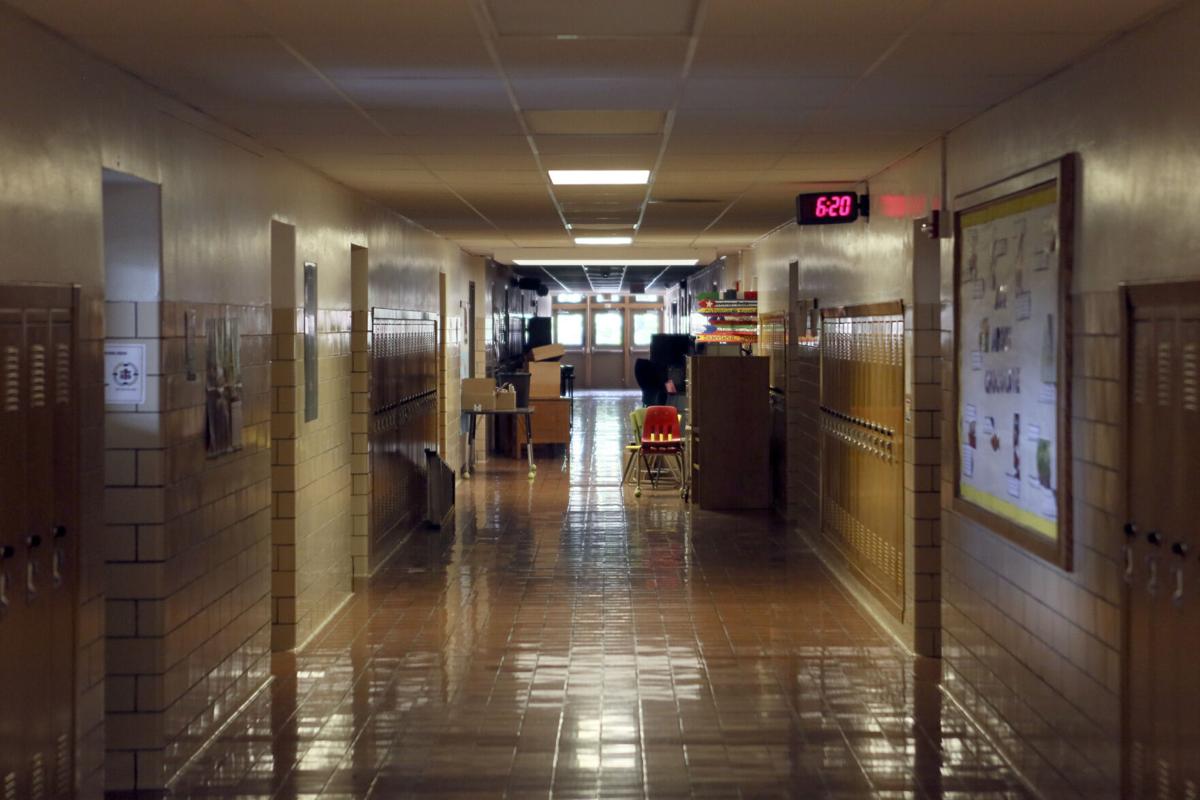 Radford High School was built in 1971 and has over 500 students. 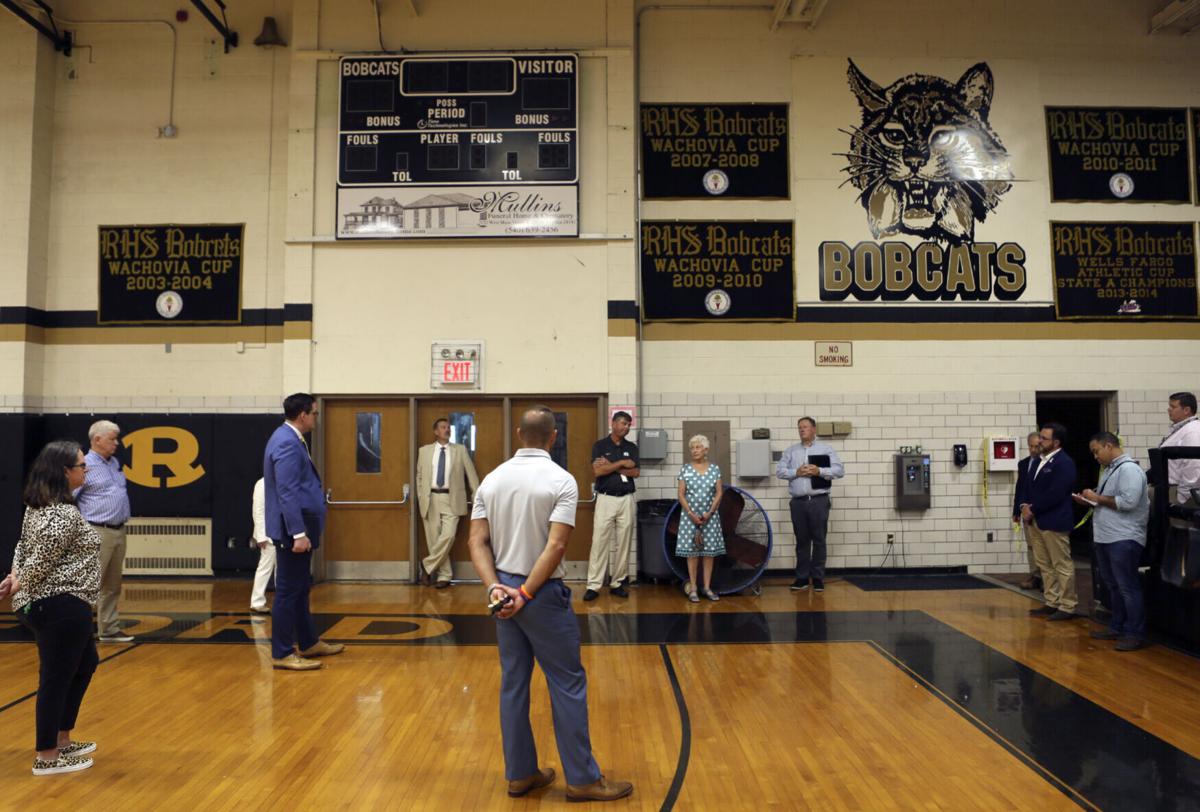 The tour visited the Radford High School gymnasium which is in need of a renovation. One goal of the tour was to give decision makers a first-hand account of school conditions. 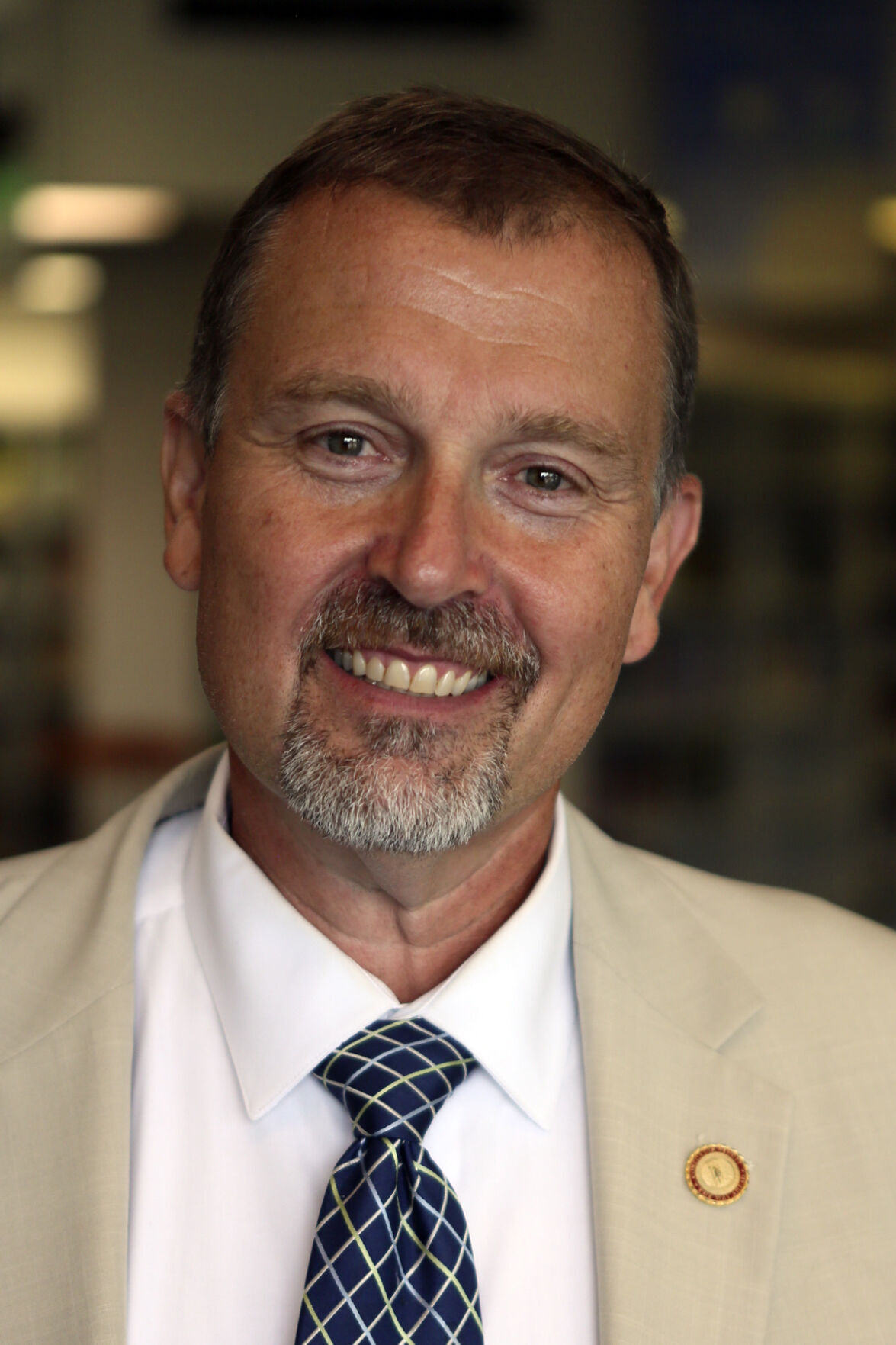 Keith Perrigan is superintendent of Bristol Virginia Public Schools and member of Virginia Coalition of Small and Rural Schools.

RADFORD — Rob Graham led a group of just over a dozen visitors Wednesday into a gym where the air was a little warmer than in some other places throughout the school.

Graham, the superintendent of Radford City Schools, immediately pointed to the numerous banners commemorating the city high school’s athletic past, but then acknowledged the obvious wrinkle. The gym currently has no air conditioning, an issue the district’s chief administrator doesn’t anticipate to be fixed this upcoming school year.

Graham said the absence of air conditioning is an issue for several reasons, with an obvious one being the health of the athletes who compete in the gym. He said the school tries to temper the problem by keeping the gym’s doors open during games to aid with air flow, but that can also lead to some security issues.

Addressing the gym and locker rooms are among the school’s top priorities, but district officials have had to hold off on immediately repairing those issues because of one major hurdle: Funding.

That’s why a number of public figures stopped by Radford High Wednesday morning to get a glance at some of the half-century old school’s ailing infrastructure.

The visit was a stop on the Region 7 Crumbling Schools Tour, a part of a statewide initiative that aims to draw attention to the deteriorating condition of public school facilities in certain localities around the state, including the majority of divisions in Southwest Virginia.

The initiative is said to aim to give decision makers a first-hand account of some of the tough conditions students and teachers endure on a regular basis. The tours also aim to highlight some of the unique challenges rural and high poverty areas face.

The goal of Wednesday’s tour and others like it is not to call out or cast blame, but to bring awareness to the difference in what is, compared to what could be, according to a news release from the organizers. This issue cannot be solved by localities alone. Continuing, the release read: “This issue cannot be solved by the Commonwealth alone. The only real solution, to this ever-growing problem, is to combine federal, state and local resources to ensure that a student’s zip code is not a predictor of the quality of the education they receive.”

“Touring the school today … it was really informative and enlightening that I was able to hear about what was happening to the infrastructure,” said Ayala, who also had other engagements scheduled in the New River Valley Wednesday.

Among other issues, Ayala pointed out seeing a teacher painting their own classroom and seeing cracks in some walls. Still, she said she was moved to learn about how passionate the faculty is about ensuring the students get the necessary resources to succeed.

One of the facts Graham highlighted about Radford High is that it’s now the district’s oldest school, having been built in 1971 after a fire destroyed the old building.

Graham led visitors to various parts of the high school, pointing out a number of pressing challenges in places such as the cafeteria, a chemistry lab and even an outdoor spot outside of the career technical education building and cafeteria that he said isn’t well buffered from off-campus elements.

Radford Mayor David Horton said the cafeteria is original to the 1950s as he walked through the area.

“It’s the same cafeteria I ate lunch in during the 80s,” he said.

Graham said there are plans to use federal pandemic funding to bring air conditioning to the cafeteria and kitchen by winter time. He said the cafeteria is actually the school’s top priority. There are no solid construction cost estimates yet for the cafeteria project, but the design is costing approximately $74,000, he said.

All the improvements at Radford High could cost a grand total of about $15 million, Graham said. Additional state and federal funding could help expedite much of those improvements, he said.

Perrigan said one of goals for school districts such as his being granted additional flexibility with the federal pandemic funding. He said he hopes schools can be given until 2026—like localities, which have two more years than schools to spend their recent federal pandemic allocations—to spend their Elementary and Secondary School Relief Fund money.

Perrigan said one key reason for an extension to spend that money is to give time for prices of construction materials to drop.

Horton said investments in the city’s public school infrastructure plays a key role in the long-term economic development of the area. He said the city also noticed throughout the pandemic of an increasing trend of people moving to the locality.

“This is why we’re turning to the state and saying, ‘This is an investment that makes sense,’” the Radford mayor said. “People want to move to this area. They recognize the quality we have here.”

Get the latest in local public safety news with this weekly email.

Radford school Superintendent Rob Graham led a tour of Radford High School, which was built in 1971, as part of the Region 7 Crumbling Schools Tour Wednesday.

Radford High School was built in 1971 and has over 500 students.

The tour visited the Radford High School gymnasium which is in need of a renovation. One goal of the tour was to give decision makers a first-hand account of school conditions.

Keith Perrigan is superintendent of Bristol Virginia Public Schools and member of Virginia Coalition of Small and Rural Schools.