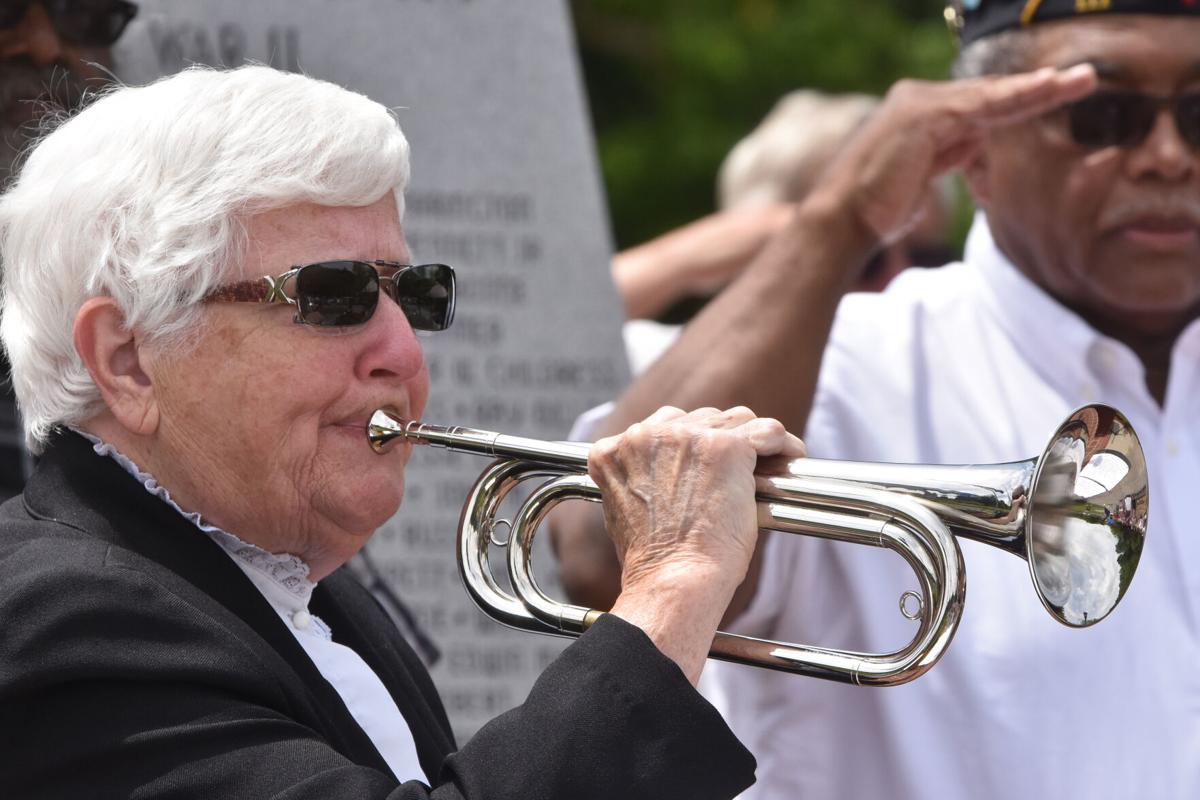 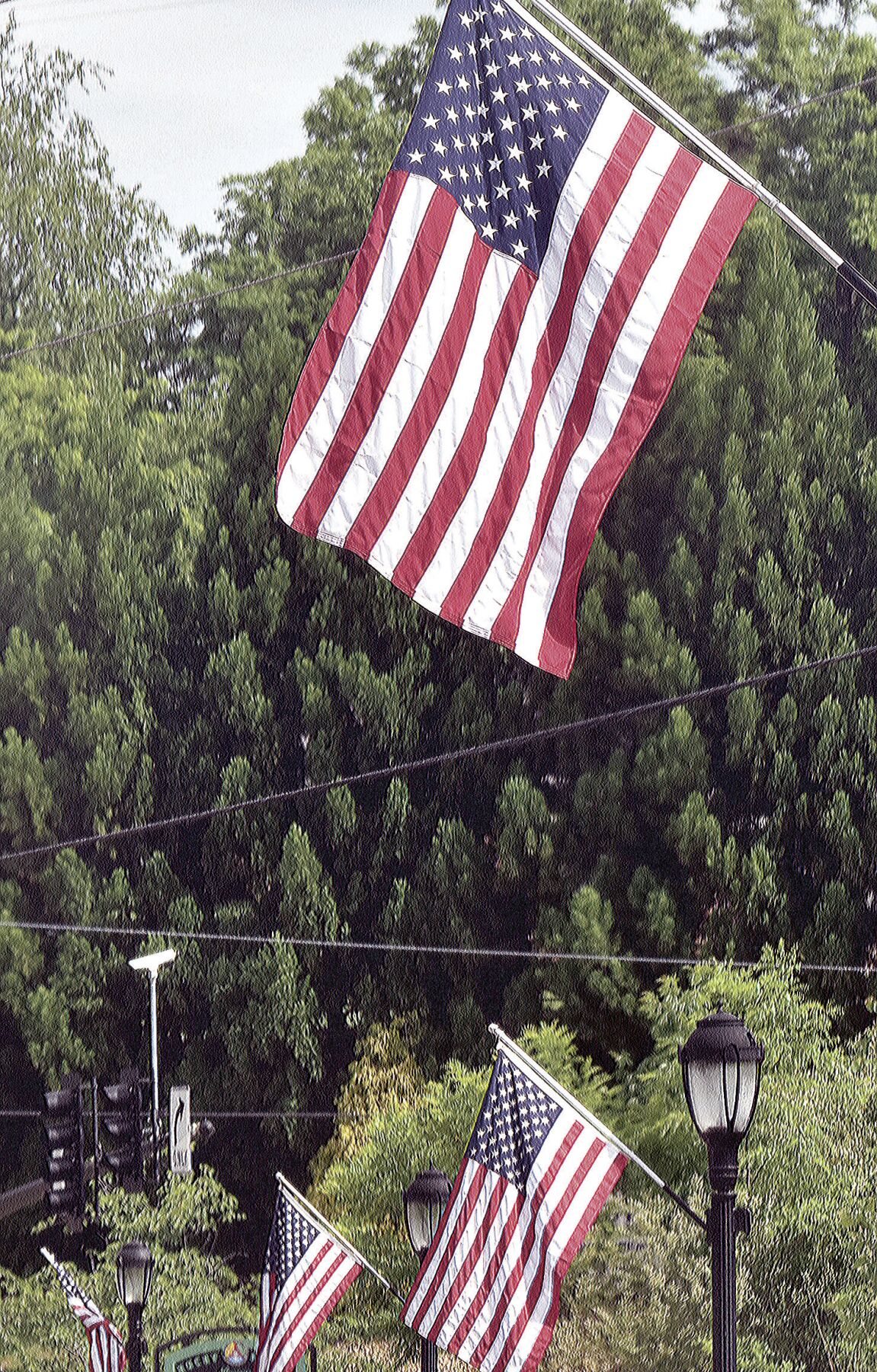 American flags fly near the entrance to the Franklin County Veterans' Memorial Park on Scuffling Hill Road in Rocky Mount. 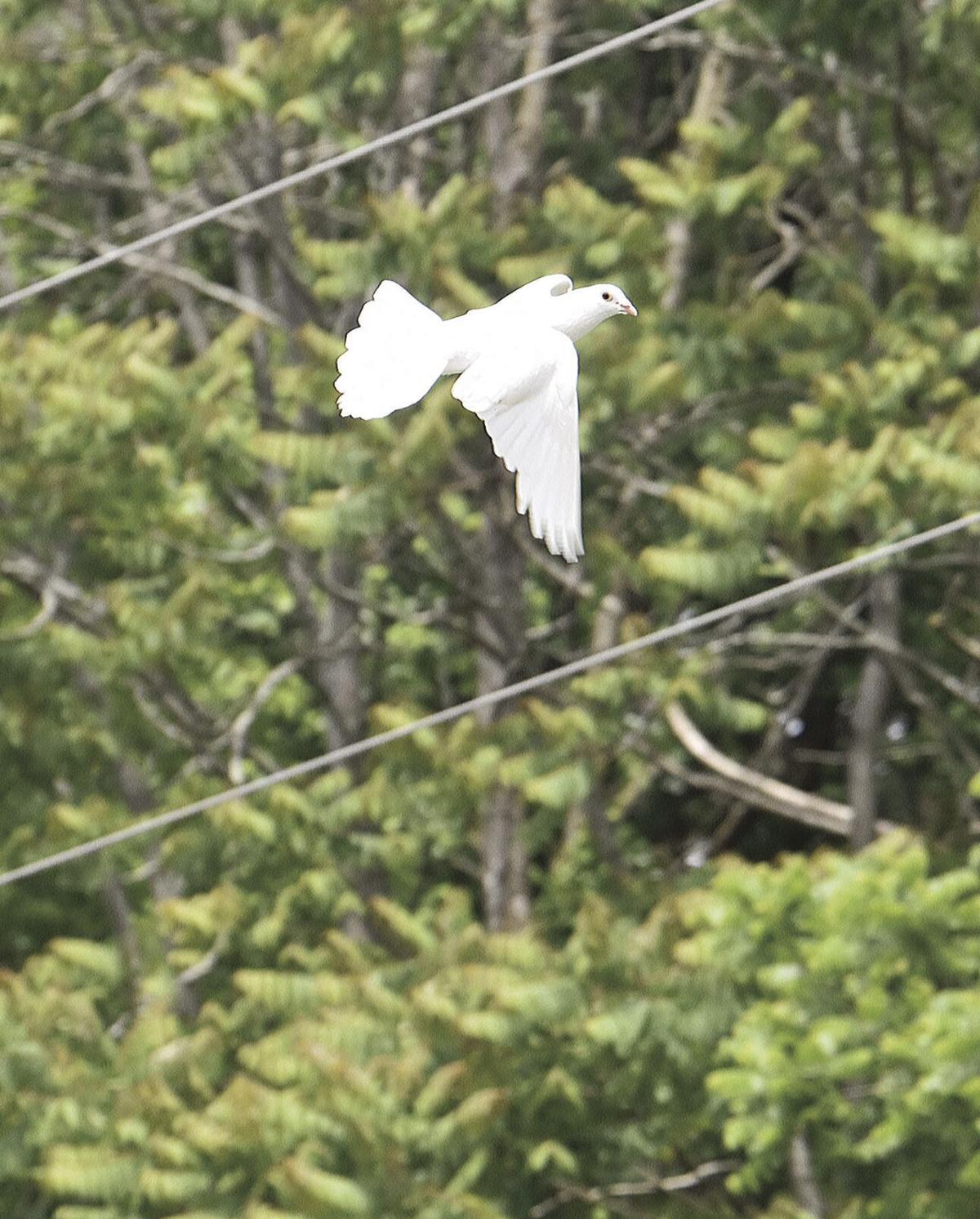 A dove, representing peace, is released at the end of the ceremony and flies in the mid-day sky. 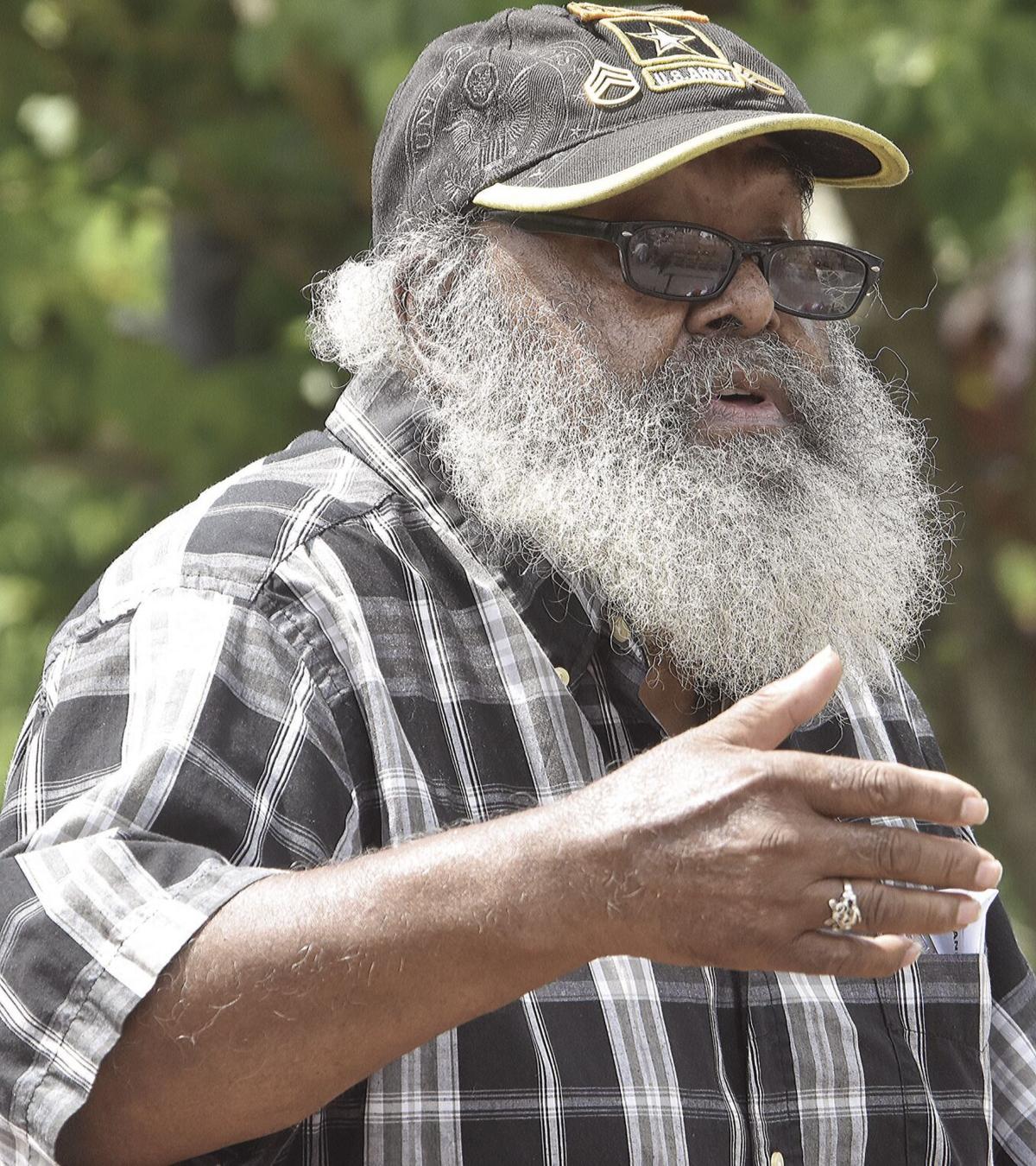 Elwood Holland, who attained the rank of Staff Sergeant in the U.S. Army, recalls his service in Vietnam during Monday's ceremony. 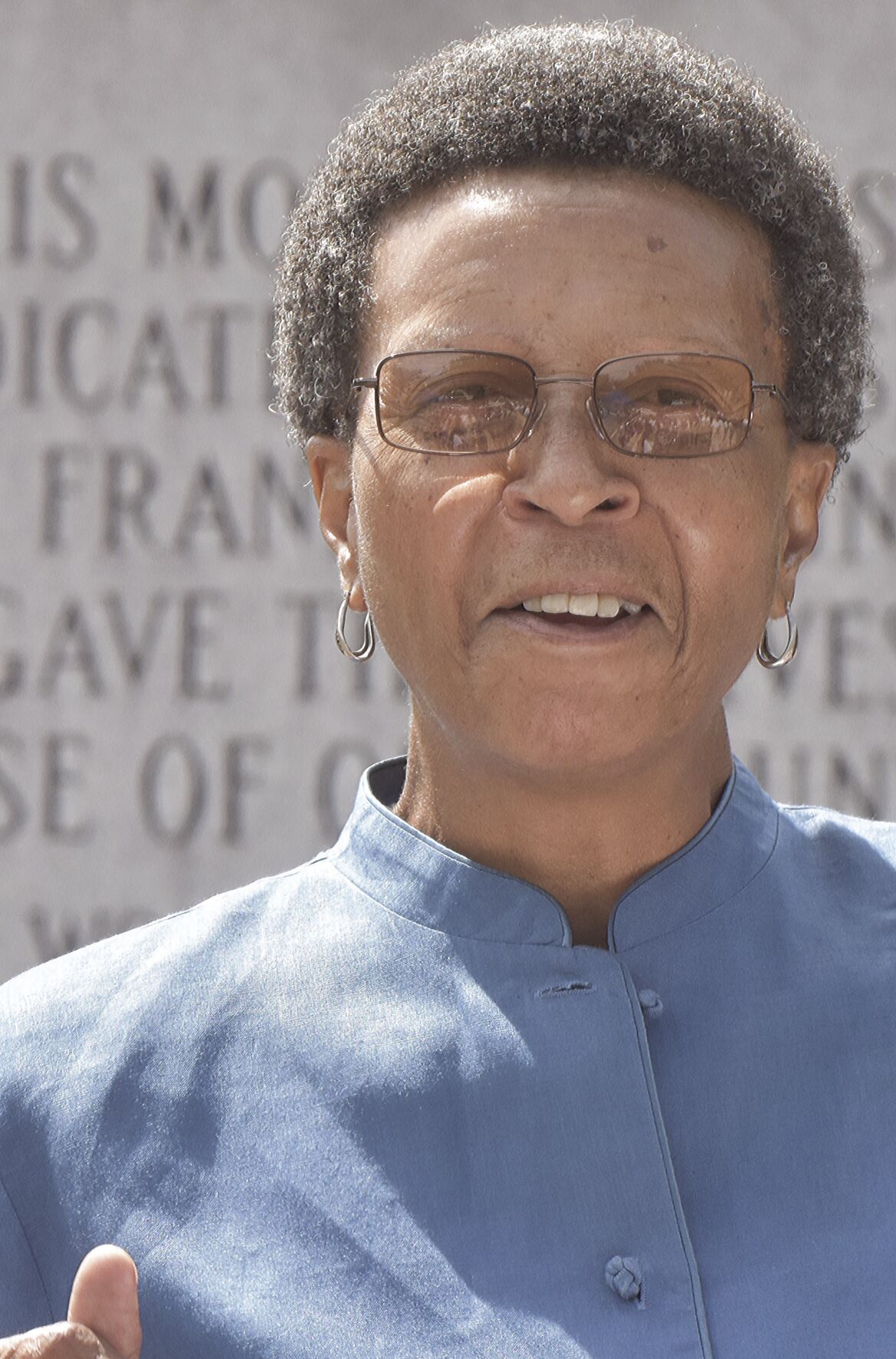 Alice M. Leavelle, who attained the rank of Sergeant First Class in the U.S. Army, recalls her serving her country both at home and abroad in the medical field. 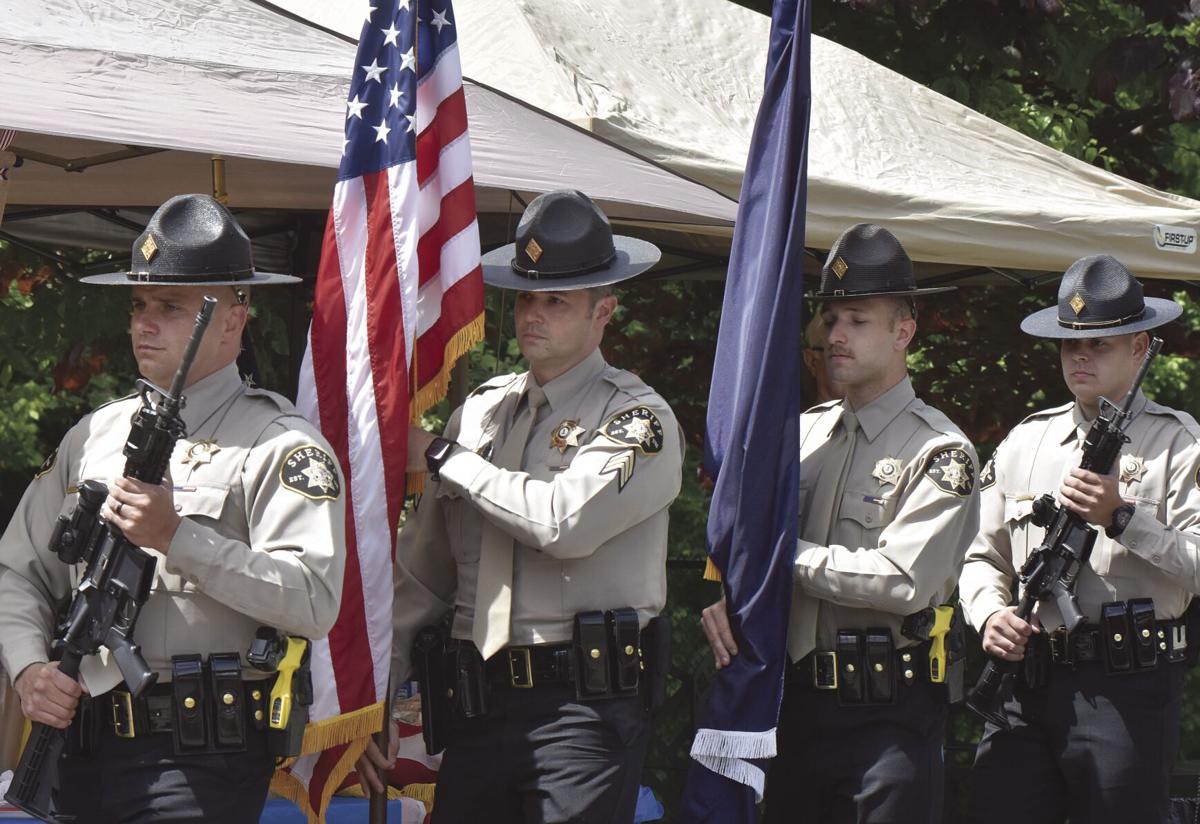 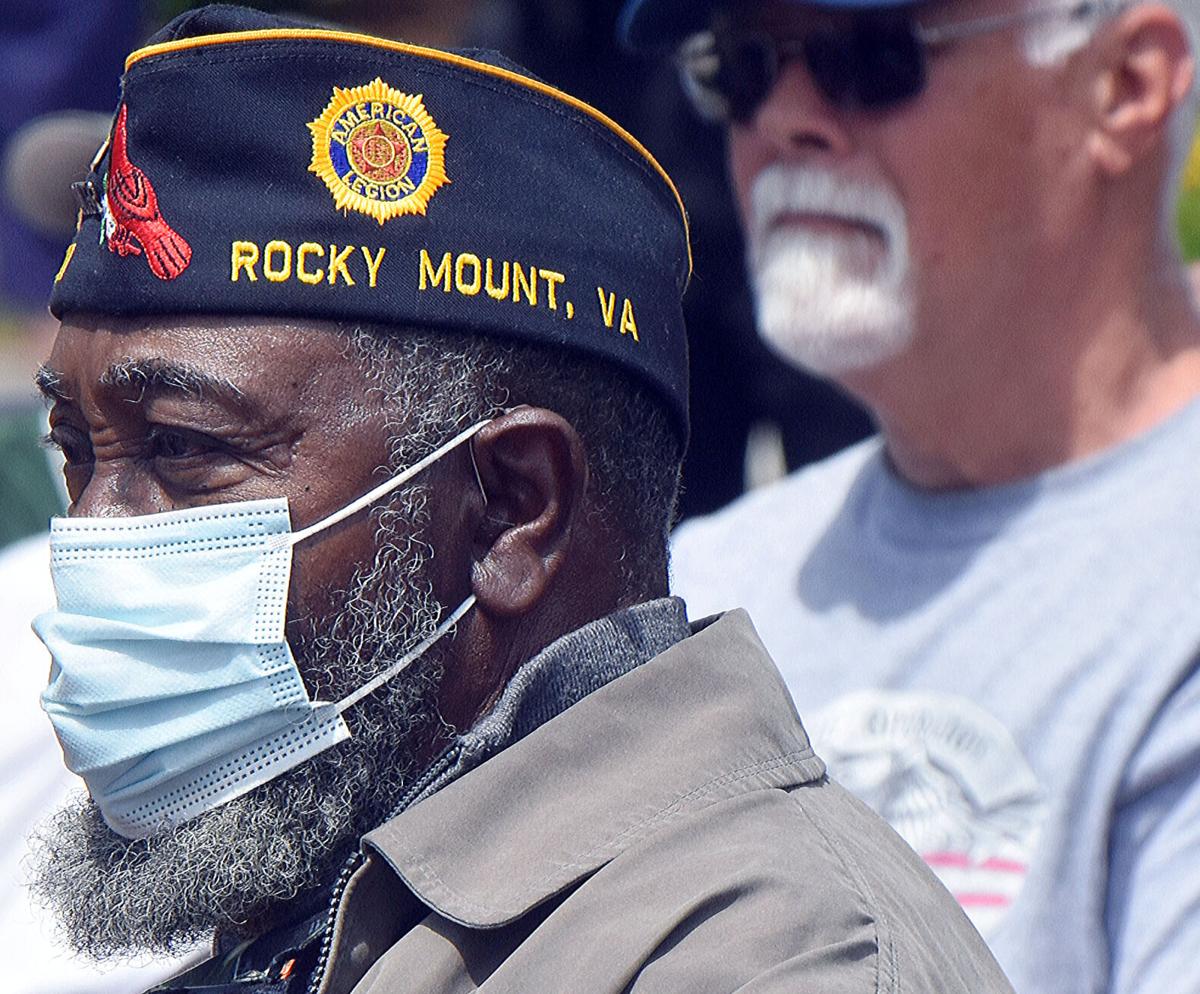 Elwood Holland said he had a eerie feeling he was headed to Vietnam once he completed basic training in Fort Bragg, North Carolina.

Holland was one of two local veterans who recalled their military service during Franklin County’s annual Memorial Day Ceremony at the Veterans’ Memorial Park in Rocky Mount on Monday.

Last year’s ceremony did not happen because of the COVID-19 pandemic and the restrictions placed on attendance at local events, both indoors and outdoors, because of it.

“I knew we were going over there (to Vietnam),’’ said Holland, who was drafted in 1968 and served until 1970. “I heard that when we get over there, if you don’t shoot somebody, they’ll shoot you.’’

The jungle was unfamiliar fighting terrain for most all American soldiers.

“(Once), we were in water up to our waist, and it was pouring down rain. I rained so hard, you could hardly breathe. There was no oxygen in the air. We had nothing to eat.’’

Once after finishing night watch duty, Holland said he heard the growl of and later spotted a tiger nearby. The tiger opted not to attack Holland and his buddies who were on patrol.

Once while walking through a rice patty, Holland would encounter a water buffalo. His recollection of the encounter drew and how it ended drew laughter from those in attendance.

“I was carrying an M-60. The buffalo was on the other side of an island ... I was on point and the next thing I knew, there were shots. ... I killed the water buffalo and I was asked why. I said, ‘I didn’t know what side he was on.’’’

Holland attained the rank of staff sergeant with U.S. Army. He was a decorated combat veteran who served with the Fourth Infantry Division and the 101st Airborne Division. He fought in the Tet Offensive in January and February 1968.

Holland attended Lee M. Waid when it was a high school in Franklin County, and Lt. Col. Larry Moore, who introduced Holland, recalled playing against him in sports during their youth.

Holland paid tribute to one of his Vietnam comrades, Roy Muse of Rocky Mount, who was in attendance. Muse had been discharged “at about the time I was going in,’’ Holland said.

“As her responsibilities increased, so did her rank,’’ Moore said in his introduction, which emphasized her many citations and decorations.

Leavelle, a graduate of Franklin County High School, comes from a military family.

Her 94-year-old father, who was in attendance, fought in World War II, a great uncle who was in World War I, two uncles who fought in Korea, three brothers who served in the Air Force and the Army, one of whom fought in the Middle East in Operation Desert Storm, and a son who is stationed in Atlanta who had fought in Iraq and Afghanistan.

“(My son) went there and he came back (home) and I thank God for that because there were many who didn’t come back,” Leavelle said.

“The soldiers of the past paved the way for others to serve and to insure the safety of America,’’ Leavelle said.

Leavelle did not serve in a war, but she was responsible for helping soldiers and their families deal with its aftereffects.

“I was honored to serve and help those who had returned from war. We all have a part to play and I encourage each of us to play our part. No matter how small or how big, it’s important because we need each other,’’ Leavelle said.

“Being a part of the military not only enhanced my educational goals and my skills, it motivated me to be the best in my field,’’ Leavelle said. “It molded me to be a better person.”

After her service, Leavelle, a mother of three, would attain degrees from Virginia Western Community College and Radford University.

“She, like many of us, knows that noncommissioned officers run the military,’’ Moore said.

“I want those who are within my voice to go into their communities and do great works,’’ Leavelle said. “I was blessed to serve my country.’’

Leavelle said there are countless numbers of soldiers classified as Missing in Action who must be remembered.

“Let us not forget about the numerous soldiers who fell fighting for our freedom, allowing us to remain free for ever and ever,’’ Leavelle said.

Photos of residents celebrating the holiday A4.

Country Star Luke Combs Paid For The Funerals Of 3 Men

Documents filed in the U.S. District Court for the District of Columbia offer no details about what the proposed deal might entail.

The board heard criticism from two of its own members that public comment wasn't permitted at Monday's full-to-capacity special meeting.

The Franklin County Sheriff’s Office and the Rocky Mount Police Department each will host National Night Out events Tuesday evening.

Both Botetourt County and Roanoke County public school divisions recommend unvaccinated individuals, which would include all students under the age of 12, should still wear masks in school.

Wednesday's report of 64 new cases in the Roanoke and Alleghany districts is more than a quarter of the 230 area infections logged in the past seven days.

The $15 million upgrade is scheduled to be finished in June 2023. Meanwhile, Franklin Memorial's current surgical services will continue uninterrupted.

No one could outwork the Arant brothers.

Before he started the Trump Store and decried Democrats and liberals as "evil," Franklin County Speedway owner Donald "Whitey" Taylor spent decades annoying local government officials with his publicity stunts. “The fact that it’s controversial is the only reason I like doing it,” he said.

American flags fly near the entrance to the Franklin County Veterans' Memorial Park on Scuffling Hill Road in Rocky Mount.

A dove, representing peace, is released at the end of the ceremony and flies in the mid-day sky.

Elwood Holland, who attained the rank of Staff Sergeant in the U.S. Army, recalls his service in Vietnam during Monday's ceremony.

Alice M. Leavelle, who attained the rank of Sergeant First Class in the U.S. Army, recalls her serving her country both at home and abroad in the medical field.