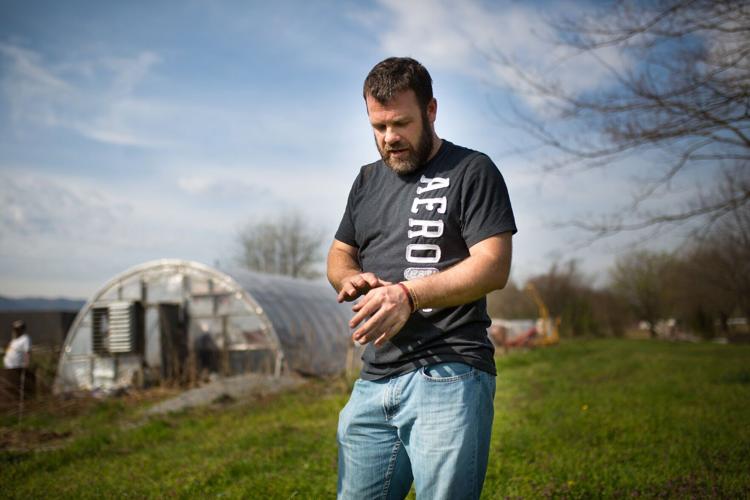 Ian Hill talks about the difficulties of growing hemp and the future possibilities of the farm land at Garrett Farms on Barley Drive in Roanoke County. 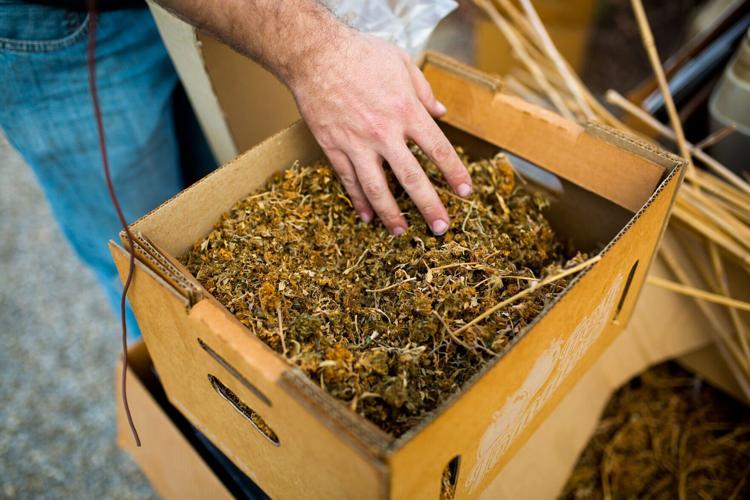 TRT Garrett Farms grew hemp that it could not sell. 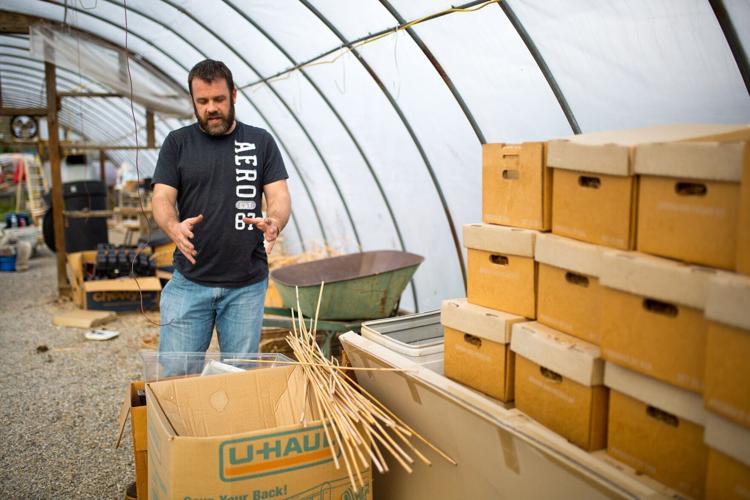 TRT Ian Hill says politics have gotten in the way of small business when it comes to growing and selling hemp.

“When it was not ungodly dry, that was about half a ton of hemp,” said Ian Hill, a third-generation farmer, pulling a crumbling handful from one of the boxes. “$20,000 worth of debt, sitting right here.”

Family-owned Garrett Farms, located in view of Interstate 81 near Salem, planted 1,700 hemp plants, tended with the help of Hill’s father, in 2019. That was shortly after a change in federal farming regulations legalized cultivation of hemp as a distinct crop from its intoxicating counterpart, the cannabis plant.

“With this CBD flower, the whole goal was to have it processed into CBD oil,” Hill said, clenching a handful of the stale flowers. “We had four processors lined up. I thought we were going to have an auction, and it was going to be awesome.”

Hill’s 3-acre hemp field was a sliver of more than 500,000 acres grown nationwide in 2019, creating a more than 400% surge in domestic hemp production, according to data from NORML, or the National Organization for the Reform of Marijuana Laws. With so much supply, the market flooded, Hill said.

“The price of hemp went from about $50 a pound, down to the lowest I heard anybody selling it was 23 cents a pound,” Hill said. “Nobody could sell it. All of our processors backed out on us.”

Hemp markets stabilized since, federal data suggests, but Hill said Garrett Farms will not grow another field full of the crop anytime soon. Not while state cannabis law is co-opted for political gain, he said, and not while people are so interested in learning to grow their own plants.

Blowing smoke? Lawmakers will gather again in Richmond on Wednesday for their 2022 reconvened session, taking up business left unfinished during the state’s winter legislative session, including cannabis policy. Adult use of the plant became legal last year.

One unresolved remaining cannabis policy is Senate Bill 591, amended for the legislature’s consideration by Gov. Glenn Youngkin earlier in April. What began as a three-page bill to prohibit cannabis edibles from appearing as certain shapes is now 30 pages, seeking to introduce new legal definitions for hemp, and recriminalize possession beyond certain amounts of pot.

But advocates say the amendments have loopholes and would do little to ensure consumer safety, while severely limiting the market for consumable hemp products.

“We have a divided government. That is the reality of our General Assembly,” Pedini said. “If Democrats and Republicans cannot find peace in the valley on adult-use retail sales, then the commonwealth cannot move forward.”

“It’s all about the legislation… That is where Virginia can decide how to best create economic opportunities for small Virginia businesses,” Pedini said. “What we are seeing is big business lobby for amendments to suit their specific needs, instead of prioritizing public and consumer safety.”

Big business ties to cannabis lobbying and the governor’s office are cause for closer scrutiny, said Jason Amatucci, president of the Virginia Hemp Coalition.

“It’s a stressful industry to be in right now, because of the industries that have a lot of power, influence and money that are coming against us,” Amatucci said. “Youngkin is not for farmers. He’s not for small business. He’s not for the hemp industry at all.”

Despite cannabis activists’ attempts to educate lawmakers, Amatucci said Youngkin’s administration has not worked in good faith to assure industry interests. Proof, he said, exists in the nature of Youngkin’s amendments to SB 591, which include detailed specifics, but not the type of language requested by small business interest groups.

“We don’t want the Wild West. We can regulate these products,” Amatucci said. “It can be easily done. It’s not rocket science.”

He said the Youngkin administration’s ties to political consulting firms, particularly the background and makeup of his aides, make him beholden to and first to hear from big-dollar interests. It’s an issue for Virginia that extends beyond the fate of this state’s cannabis policy, he said.

“We need the cannabis industry to thrive in Virginia, but we’re getting road-blocked because of big pharma, and the powers that be,” Amatucci said. “If you start to really look into this, it goes a long way into seeing who’s really running our Virginia government right now.”

High hopesWhen Buddy Hill bought Garrett Farms from his grandfather in the 1980s, he expected small agriculture to make a comeback. By the time they tried planting hemp in 2019, the Hills were on the verge of shutting down their 24-acre farm, kept in the family since the 1940s.

“I’m trying not to end up as a bitter old man,” Buddy Hill said. “We’ve tried about everything, and we’re still trying.”

Potential exists for Virginia to make hemp and cannabis into cash crops for small farmers, Buddy Hill said. But there is neither support nor reassurance from state policymakers, he said, because they are funded by pharmaceutical lobbyists, leaving small farmers’ interests to the wayside.

“Lawmakers have a chance to rescue small agriculture in the state of Virginia,” Buddy Hill said. “But now? No, it’s big pharma. They’re going to send all that money out of state.”

It’s already happening in the medical cannabis sector, Buddy Hill said. Of the licensed medicinal marijuana retailers in Virginia, none are owned in-state.

“Keep your politics off my plant,” Ian Hill said. “The politics have screwed it all up.”

“We are about to fill that greenhouse up with our goal is 1,000 hemp plants,” Ian Hill said. “At the time that we gift them to the public, they’ll contain no cannabinoids whatsoever.”

He said last year Garrett Farms ran a promotion giving away a free hemp plant to anybody who followed the farm’s social media page. Their Facebook following grew to more than 1,600 people overnight.

“It was easily the most amazing marketing we’ve ever done on the farm,” Ian Hill said. “We had 450 people come up to the farm that day, and we gave those plants away one at a time.”

Some people even pay him for garden consulting, to ensure plants grow up strong and full of flowers, he said.

Such public interest inspired Garrett Farms to plan for a 2021 fall festival, four weekends that brought a few thousand visitors to the farm for vendors and speakers, Ian Hill said.

“That’s where I started seeing the benefit of agritourism,” Ian Hill said. “We’ve got this new marijuana industry, and people are starting to pay a little bit more attention to agriculture. Hopefully that’s a catalyst.”

Garrett Farms will host the Springtime Cannabis Growers’ Meet and Greet, set for May 21 and 22, with tickets now on sale, he said.

Later this year, for the farm’s second fall festival, Ian Hill said he wants to combine his passions by including a haunted house experience to go along with the hemp plant giveaways and other entertainment.

“It’s a mess, the way they set stuff up,” Ian Hill said of Virginia’s cannabis legalization. “We’re just trying to find how we can fit into that mess and be as legal as we possibly can be.”

A physician’s assistant from Smith Mountain Lake is facing a second-degree murder charge in New York.

ROCKY MOUNT — On Thursday McKenzie D. Smith, a former deputy with the Franklin County Sheriff’s Office, was sentenced in relation to an April 23 misdemeanor first offense driving while intoxicated charge.

Police officer Justin Smith had claimed he was forced to resign after coming to the defense of two women who made complaints against the police chief.

On May 6, Dr. Francis Amos told students at Sontag Elementary School about the history of their school.

The Franklin County School Board has decided to go with a design-bid-build process for a career and technical education building project.

Shalita Armstrong: “Ferrum was a local option versus online. I wanted to attend a college where if I needed help in person, it would be available. I’m so glad I made this choice,” she said.

Franklin County is searching for solutions to its public safety problems, which include a shortage of EMS personnel.

'Every word of it is true': Heard speaks on op-ed after break in defamation trial

'Every word of it is true': Heard speaks on op-ed after break in defamation trial

Ian Hill talks about the difficulties of growing hemp and the future possibilities of the farm land at Garrett Farms on Barley Drive in Roanoke County.

TRT Garrett Farms grew hemp that it could not sell.

TRT Ian Hill says politics have gotten in the way of small business when it comes to growing and selling hemp.