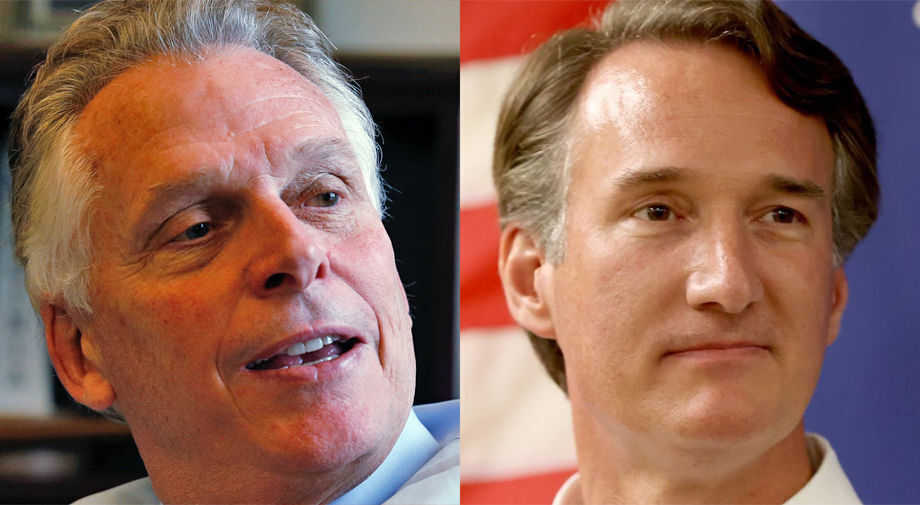 In their second and final debate Tuesday, Democrat Terry McAuliffe and Republican Glenn Youngkin offered competing visions for how to bring the pandemic to an end and grow the state’s economy, but took similar positions on protecting LGBTQ students in public schools and agreed that the state will retain its right-to-work law.

The tone of the debate between the major party candidates for governor, held at the Alexandria campus of Northern Virginia Community College, was generally less combative than their first encounter Sept. 16. But the live broadcast, carried on NBC stations around the state, was interrupted about halfway by the third-party candidate in the race, Princess Blanding, who protested being left out of the debate, per standard rules that keep low-polling candidates off the stage.

McAuliffe and Youngkin will not face off in another debate ahead of the Nov. 2 election, failing to come to an agreement on more forums. McAuliffe, who served as governor from 2014 to 2018, will need to overcome signs of waning enthusiasm among Democrats in the state to be elected for another term, but stands to benefit from Virginia’s tendency to favor his party in statewide elections. Youngkin, a former private equity executive, is trying to become the first Republican elected statewide since 2009 and has gained momentum among likely voters, according to recent polls.

Here are some key takeaways from Tuesday’s debate:

COVID-19 and vaccinesMcAuliffe and Youngkin continued to stand by their differing approaches to COVID-19 vaccine mandates: McAuliffe again threw his support behind requiring vaccines broadly, arguing that any economic development goals for the state are dependent on bringing the pandemic to an end.

A recent poll from The Washington Post and the Schar School at George Mason University found that 55% of Virginians support businesses broadly requiring vaccines from their employees, and two-thirds support vaccine mandates for teachers.

“I’m running against a candidate who has been spreading anti-vax rhetoric across the state,” McAuliffe said of Youngkin.

Youngkin, in turn, insisted that Virginians should choose to get vaccinated, and urged the public to do so, noting that he is vaccinated. Amid reports nationwide of workers threatening to leave their jobs over vaccine requirements, Youngkin said: “We need those health care workers. We need people on the job, not to make their life difficult. That’s no way to serve Virginians.”

Pressed by moderator Chuck Todd of NBC’s “Meet the Press” on whether he supports vaccine requirements for measles, mumps and rubella — which are generally required in public schools, but have in recent years faced protest from some parents — Youngkin appeared to stumble.

LGBTQ policies in schoolsMcAuliffe was pressed on comments he made during the first gubernatorial debate at the Appalachian School of Law, during which he argued that policies regarding the treatment of LGBTQ students should be left to individual school districts.

Local school boards around the state have in recent years debated whether to allow students to use restrooms and locker rooms that match their gender identity, and how teachers should respond to requests from students to be addressed by specific pronouns.

The state issued “model” guidance earlier this year urging districts to comply with LGBTQ students’ preferences. Many districts have refused.

McAuliffe on Tuesday said again that localities should have input, even as the state makes recommendations. “I’d like locals having input obviously on such an important issue but the state will always issue guidance as we do from the Department of Education,” he said.

Youngkin weighed in, saying he agreed.

Afghan refugeesAs Virginia welcomes and settles refugees fleeing Afghanistan after the Taliban’s takeover, Youngkin was asked whether Virginia should welcome their resettlement within the state.

Youngkin said the U.S. withdrawal from Afghanistan was “an abject failure of leadership” by President Joe Biden, and then suggested refugees should be required to be vaccinated, despite opposing such a mandate for current Virginia residents.

“We need to make sure that we’re processing everyone who comes in. Have they had a COVID-19 vaccine?” Youngkin said. “ I think we should make sure that those that stood shoulder to shoulder with us are welcomed, that they’re processed appropriately, that they have a home in Virginia.”

Right to workMcAuliffe on Tuesday reiterated his positions on repealing the state’s right-to-work policy — which allows employees to withhold dues from the unions that represent them without risking their job — and qualified immunity protections for police officers, stances on which he differs with some Democrats in the state.

McAuliffe said repealing right-to-work is “not gonna change here in Virginia,” because repeal doesn’t have enough political support in the legislature.

AbortionYoungkin said firmly he would not support adding to the state constitution a woman’s right to an abortion at any stage.

Youngkin has said throughout the campaign that he opposes abortions, and would support banning them around the time a fetus can feel pain, which some states have defined as 20 weeks. Youngkin supports exceptions in cases of rape, incest or when the mother’s life is in jeopardy.

2024 presidential electionYoungkin said that if former President Donald Trump runs again in 2024 and becomes the party’s candidate, he would support him.

“If he’s the Republican nominee, I’ll support him.”

McAuliffe was also asked about the 2024 presidential election, given speculation that he is considering a run after a failed exploratory bid ahead of the 2020 election. Asked if he would commit to serving the full term from 2022 to 2026, he said: “Yes, absolutely. And listen, I looked at 2020, that didn’t go too far.”

BlandingBlanding, an activist and educator making a third-party bid who was not invited to participate, interrupted the debate, shouting from the audience about how she had been shut out. The station went to a commercial break.

She told The Associated Press earlier in the day that the Northern Virginia Chamber of Commerce had invited her to sit in the audience and meet with the press afterward.

“The way that felt to me was, yes, you can come and get on the bus like everybody else ... but you’re going to sit in the back of the bus. I met the requirements just like they did to get on the ballot, however, I’m being blocked,” she said.

Blanding is the sister of Marcus-David Peters, a teacher who was shot and killed by Richmond Police in 2018 while in mental distress.

Information from The Associated Press was included in this report.