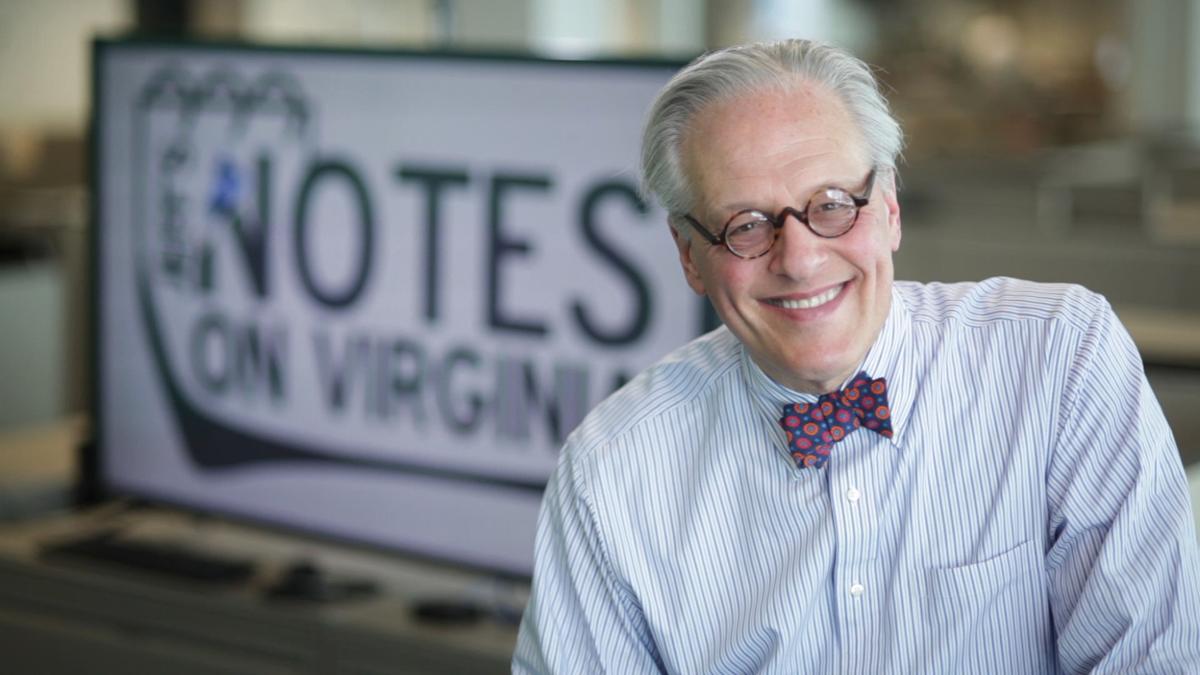 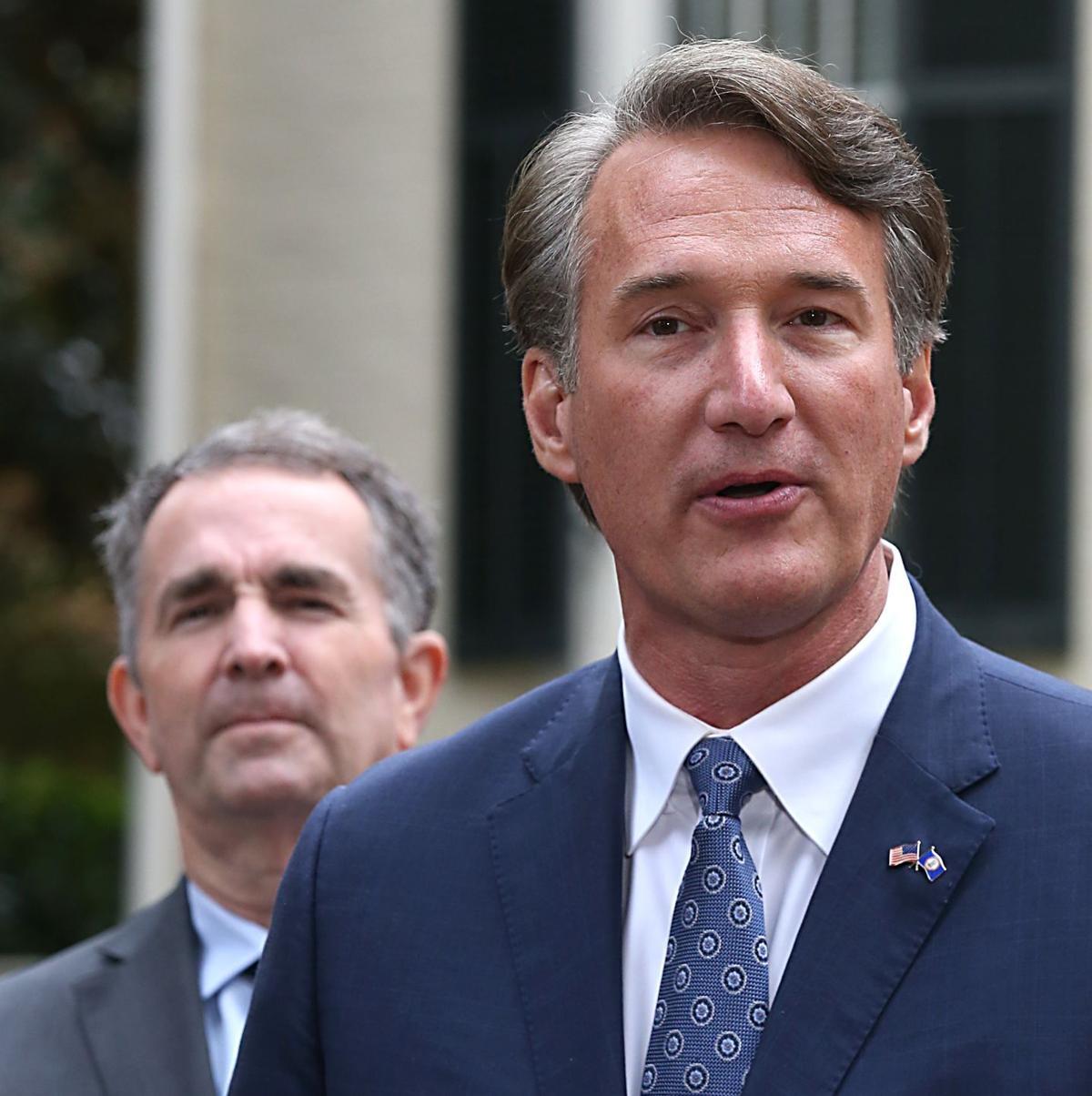 TRT Gov.-elect Glenn Youngkin, with Gov. Ralph Northam standing behind him, spoke in Richmond outside the Executive Mansion two days after the election.

What Glenn Youngkin may find missing in the job description for an incoming Virginia governor:

Mandate? Depends who you ask. Youngkin won narrowly, notwithstanding the highest turnout in a gubernatorial election since 1993, the surge in red rural Virginia and his impressive performance in the blue suburbs, including giant Fairfax County, where, according to the Virginia Public Access Project, 200 precincts were more Republican, compared with 43 performing better for Democrats.

Youngkin’s majority over McAuliffe was 63,500 votes or 1.9%. Does that mean Youngkin has a license to kill on, say, emphasizing education over indoctrination, as he suggested in his steady, Trumpy attack on woke-ism? It could all come down to packaging. Despite his own religious and social conservatism, it’s difficult to imagine Youngkin wants to govern as a culture warrior.

The previous three Republican governors — George Allen, Jim Gilmore and Bob McDonnell — were elected in mid- to high double-digit landslides that ensured they could immediately put in place, despite, in some cases, Democratic legislative majorities, signature programs that endure to this day.

One of them — Allen’s parole-abolition scheme — has greater relevance nearly 30 years on because of worries over crime and the perception that, post-George Floyd, Democrats want to put cops in handcuffs.

Unless Youngkin, following Gilmore’s lead, dangles a high-paying administration job for a Senate Democrat to give up a seat that Republicans might win, tying the chamber, 20-20, and weaponizing the tie-breaking vote of the GOP lieutenant governor, Winsome Sears.

Master the facts. The Virginia Constitution is more about limiting power than expanding it. Youngkin cannot — as he vowed he would — ban, by executive order, critical race theory from public school classrooms. Never mind, it’s not taught. Education policy, under our constitution, requires collaboration: a governor who appoints a superintendent and state Board of Education and a legislature that pays for schools.

And doing away with the grocery tax — an idea on which Republicans and Democrats should agree — is easier said than done, given that the $500 million-plus it generates annually goes to such general services as education and is shared by state and local government. Fearing Son of Car Tax — the Gilmore-pushed rollback in 1998 that threatened local revenue — cities and counties will want to know how to make up money lost to food-tax repeal.

Loyalty is for suckers. Youngkin’s leverage over Republican legislators will fade after the 2023 elections that could affirm the party’s majority in the House of Delegates; perhaps restore it in the Virginia Senate. At that point, House Republicans will worry about defending their seats in 2025, when God-knows-who is the GOP nominee for governor. Senate Republicans will tune out, having been elected to terms that extend beyond Youngkin’s.

There’s the remote possibility that recounts for two House seats lead to an evenly divided chamber and power-sharing or, because of the continuing kerfuffle over redistricting, federal court-ordered special elections for the House in 2022 that might tip the House back to the Democrats.

Government isn’t a business. In private equity, where Youngkin made a ton, one buys businesses with borrowed cash, strips them bare to promote profit; then sells them at a premium to pay the loan and pocket the rest. Democrats and Republicans have had mixed luck turning over public functions to the private sector, which — for IT services and some road construction — did the reverse of private equity guys by gold-plating programs that demanded Tiffany prices.

Government is inefficient — and expensive — because it provides services the private sector won’t touch, recognizing there’s no profit. And those government services that are lucrative — the liquor monopoly, for example — Republicans, despite their devotion to free markets, have no intention of surrendering to private business, as McDonnell proposed.

Don’t believe your clips. Adoring, uncritical coverage of Youngkin by conservative media and his targeted communication with the Republican base via social media that, depending on the day, can turn it into a snarling attack dog or pliant lap dog can have an isolating effect, making it more difficult for the new governor to win over adversaries whose votes he may need.

Further, Youngkin must do with Republicans what Ralph Northam, because of the blackface calamity, avoided with Democrats: serve as a check on a party’s excesses.

We either do business or you get the business. Though its ranks are diminished, the state Capitol press corps has a constituency with which Youngkin has limited contact: lobbyists, contractors, donors, legislators, candidates, local officials and 100,000 state government employees. Because they’ve been doing politics and policy a lot longer than Youngkin, they’ll reject happy talk from the administration that doesn’t square with reported facts or what they’re seeing themselves.

The bureaucracy leaked like a sieve every time Allen depicted state employees as overpaid and underworked. Ditto during the Doug Wilder years, especially when he imposed a new health insurance program for workers, essentially without telling them.

By not cooperating with those who pay him the highest compliment by covering him, Youngkin risks transforming his transition and administration into target-rich environments for reporters in which the order of the day is press ambushes and Freedom of Information Act requests on everything from such red meat as internal discussions on election insecurity to the Executive Mansion grocery bill.

You are a lame duck. The moment Youngkin completes his oath of office, time is running out on his non-renewable four-year term. There are no do-overs.

Hollifield: Tom T. and $40 in the parking lot

Back around 1968, the late, great country-and-western artist Tom T. Hall wrote and recorded a song called “The Ballad of Forty Dollars.” It wa…

My 10-year-old friend, Elizabeth, speaks affectionately of her friend Max. She relates how the mixed breed dog was found at the pound. Max and…

As a year of redistricting failure was ending, the Virginia Supreme Court handed Virginians what could be the state’s fairest legislative district maps ever drawn.

TRT Gov.-elect Glenn Youngkin, with Gov. Ralph Northam standing behind him, spoke in Richmond outside the Executive Mansion two days after the election.