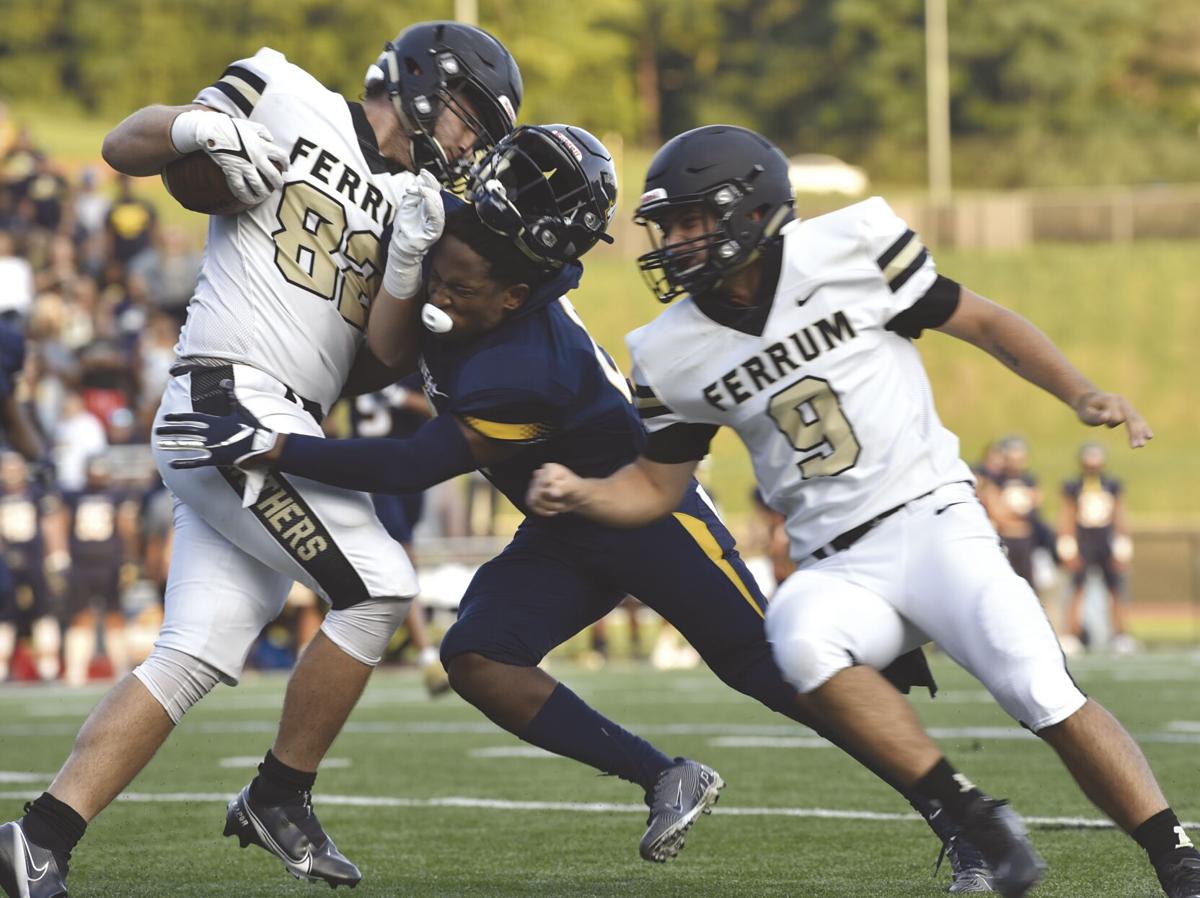 After catching a pass from quarterback Titus Jones, Ferrum College tight end Conner Sides (No. 82) collides with an Averett University defender. The impact of the collision forces the helmet from his head. Blocking on the play is receiver Nic Cook (No. 9). 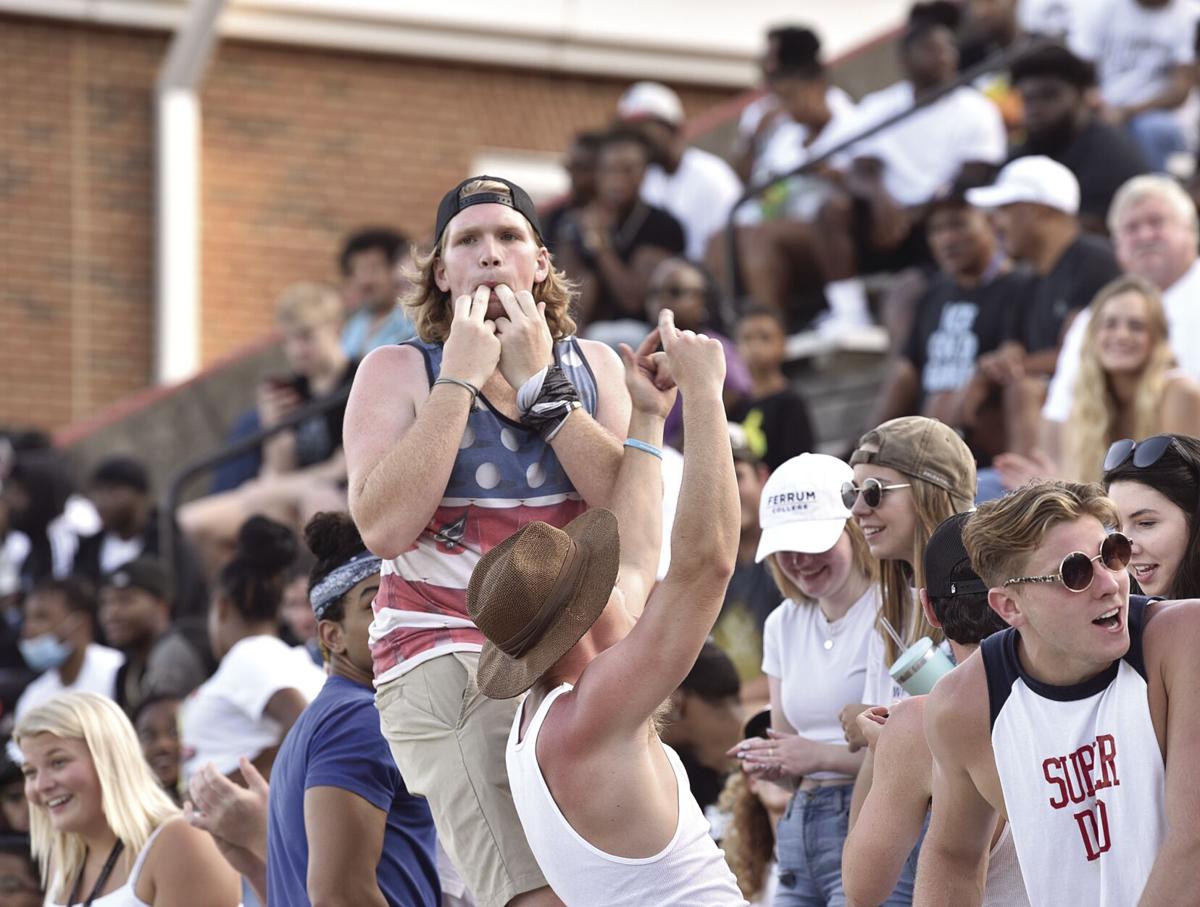 The truth is Ferrum’s 31-24 non-conference victory of Averett University will be remembered most by a play the Panthers’ defense made in the third quarter, a play that capped a possible 14-point swing and enabled the Panthers to extend a four-point edge at intermission to 18 points.

Ferrum head coach Cleive Adams won for the first time at W.B. Adams Stadium in his one-plus years tenure after winning there three times during a six-year head coach term at Averett, and quarterback Titus Jones had previously lost three home starts: to Randolph-Macon College as a sophomore in 2019 and to Emory & Henry College and Bridgewater College as a junior this past spring.

The play that stood out occurred with 7:54 left in the third quarter with Averett (0-1) driving deep into the red (scoring) zone in an attempt to reduce a 21-10 deficit to a single-digit difference.

On a second and goal call from the Ferrum 6, a pass attempt by Cougars quarterback Bryce Jackson was tipped by Ferrum defender Josh Austin and caught by defensive lineman Devin Hanson at the 10.

Hanson, a senior, returned the interception, the first of his Ferrum career, 90 yards for a touchdown to help Ferrum (1-0) enhance its advantage, one that would reach 21 points (31-10) before Averett rallied for two, fourth-quarter TDs on Jackson pass plays covering 17 and 6 yards.

“It was an in-the-moment thing—it was one of those moments in football where you just go. I saw (the ball), caught it and took off.

“After I cleared the second (Averett) player, I looked to the left and there was nobody else there, just a bunch of white (Ferrum) jerseys. Then, I was in the end zone. I’d never saw myself in that situation,’’ Hanson said. “It was a new experience for me.

“It was crazy. I was tired when I got to end zone. I had to take off a couple of plays (after the score). I was not ready to run 90 yards.’’

As an old defensive coordinator, Adams said he loves to see Pick 6s.

“We talked at halftime about getting our hands up (on defense). They were throwing a lot of RPOs (run-pass options) and not a lot of five-step drops until the end, so you really didn’t have a chance to rush the quarterback. Josh came off the edge and got his hands up, (tipped it) and Devin picked it off and took it in,’’ Adams said.

“We’ve got some guys on defense who can run and Devin is a defensive end who can flat-out run. I’m pretty impressed by that.’’

“It’s always fun to see the defense come up with the ball and score,’’ Jones said. “They pick me off in practice some times and they can’t always take it back to the house (the end zone). To see (Devin) take it all the way to the crib and score was very exciting.’’

Averett was plagued by three turnovers—two fumbles and the interception. Ferrum’s lone turnover was a fumble.

The Panthers capped a 17-point second half when kicker Seth Deaton nailed a 26-yard field goal with 11:47 remaining—a boot that ended an 11-play, 53-yard march that erased 5:52 from the clock.

Emotions erupted second after the final gun as the two teams had to be separated in the end zone.

“I wish the game hadn’t ended that way,’’ Adams said.

Next season, the emotional level of this contest reaches a new level when it becomes an Old Dominion Athletic Conference (ODAC) encounter that will be staged in the final week of regular-season play. Averett enters the league as an all-sports member in July 2022.

Ferrum’s victory is its first in a season opener since …

“From an emotional standpoint, I’m glad this one is done. It was hard. I didn’t get to get it off my chest last year. Finally getting to play, it was emotional on both sides,’’ Adams said. “For all intents and purposes, the majority of the foundation of Averett’s coaching) staff were my guys. We spent a ton of time together. We were together for quite a long time. Games like this are always tough.’’

One of Adams’ Averett assistants, Scott McConnell, the Panthers’ special teams coordinator and wide receivers coach, filled a vacancy on Ferrum’s staff, thus he too was able to share in Adams’ triumph.

“I think this is going to be a natural rivalry. This first one with me back here, it didn’t disappoint the fans, I can tell you that much. It was a tough game. Every year moving forward, it’s going to be a battle in recruiting and on the sidelines,’’ Adams said.

Ferrum’s fans returned to Adams Stadium for the first time since 2019 and Averett brought a significant contingent of its faithful to cheer on the Cougars. The attendance was estimated at 2,259.

Adams said he was familiar with about 75 percent of Averett’s players.

“Looking at the two-deep (depth chart), I recruited and coached probably all but two or three players in (Averett’s) starting line-up,’’ Adams said.

Jones completed passes to nine receivers with Tmahdae Penn catching nine tosses for 131 yards and two scores—one in each half.

Ferrum led 14-0 after Jones’ TD hook-ups with Penn for seven yards in the first quarter and Christian Caldwell for 15 yards in the second stanza.

Averett’s Shawn Watlington scored the game’s lone rushing TD with 12:02 showing in the second stanza and a 38-yard field goal by Will Caviness completed a 10-point scoring surge by the Cougars.

Jackson was 31 of 54 for 322 yards, two TDs and the one interception. He completed passes to seven receivers with Jarrod Mosby leading the way with seven receptions for 90 yards. Isaiah Grice and Nick Andrews caught Jackson’s scoring strikes.

Ja’Kari Williams was Ferrum’s top tackler with nine solo stops. Billy Higgins and Rashawn Hairston each had a tackle for loss, while Drew Hill and Dion Graham each recovered a fumble and Williams, Graham and former Franklin County prep standout Jalen Jamison each broke up a pass.

Former FCHS star Josh Luckett, a freshman, has won Ferrum’s punting job. In his first intercollegiate contest, he punted five times for 181 yards—a 36.2-yard average. His best effort covered 48 yards and he placed three of his punts inside the 20 yard line.

Ferrum’s season-opening victory is its first since 2019.

The Panthers have their open date this Saturday. Their next game is Saturday, Sept. 18 against Christopher Newport University in Newport News.

LYNCHBURG—Mathematically, one is a prime number.

Atchue claims victory in sprint to the finish

LYNCHBURG—Franklin County’s varsity football team, a week from an unexpected break in its season due to COVID-19 issues, revives its campaign …

JAYVEES ARE BLANKED IN OPENER

RIDGEWAY—When Franklin County bested Magna Vista in a 2019 non-district contest, it marked the first time the Eagles had won on the Warriors’ …

Franklin County's varsity and junior varsity football teams have rescheduled their non-district games against Salem which were postponed last week because of COVID 19 issues at the high school.

This gives the Eagles three games in eight days, starting with their Blue Ridge District home opener Friday, Oct. 15 against William Byrd and ending with a visit to league foe and Class 5 state semifinalist William Fleming on Friday, Oct. 22.

This marks FCHS's third Tuesday night game in program history and the Eagles are 2-0 on that day - they defeated Magna Vista at home during the 2000 season and Northside this past spring.

This gives the jayvees three games in eight days, starting with its Blue Ridge District opener against Staunton River at home on Thursday, Oct. 7 and  ending with a trip to Vinton for a league game against William Byrd on Thursday, Oct. 14.

FCHS's jayvees have rescheduled their game against Bassett for Monday, Sept. 13 at Ed Bassett Stadium. Kickoff is 6 p.m.

That also gives FCHS three games in eight days, starting with Thursday home game against Liberty Christian and ending with a home contest against Magna Vista on Thursday, Sept. 16

After catching a pass from quarterback Titus Jones, Ferrum College tight end Conner Sides (No. 82) collides with an Averett University defender. The impact of the collision forces the helmet from his head. Blocking on the play is receiver Nic Cook (No. 9).