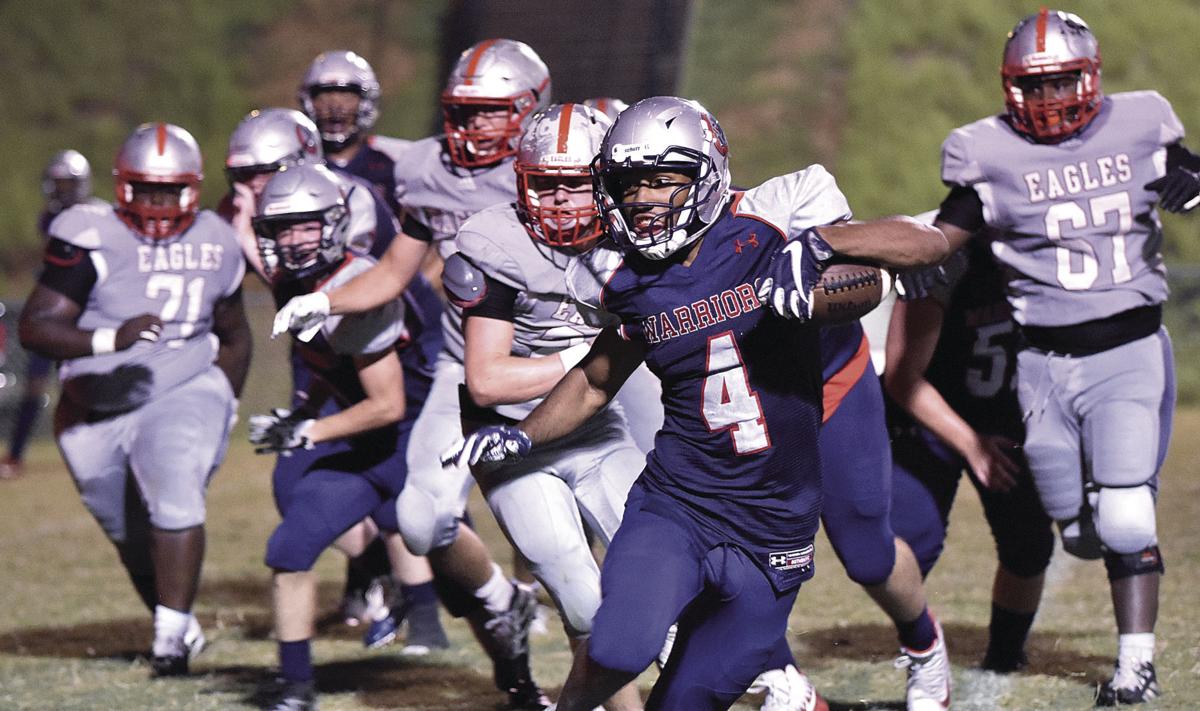 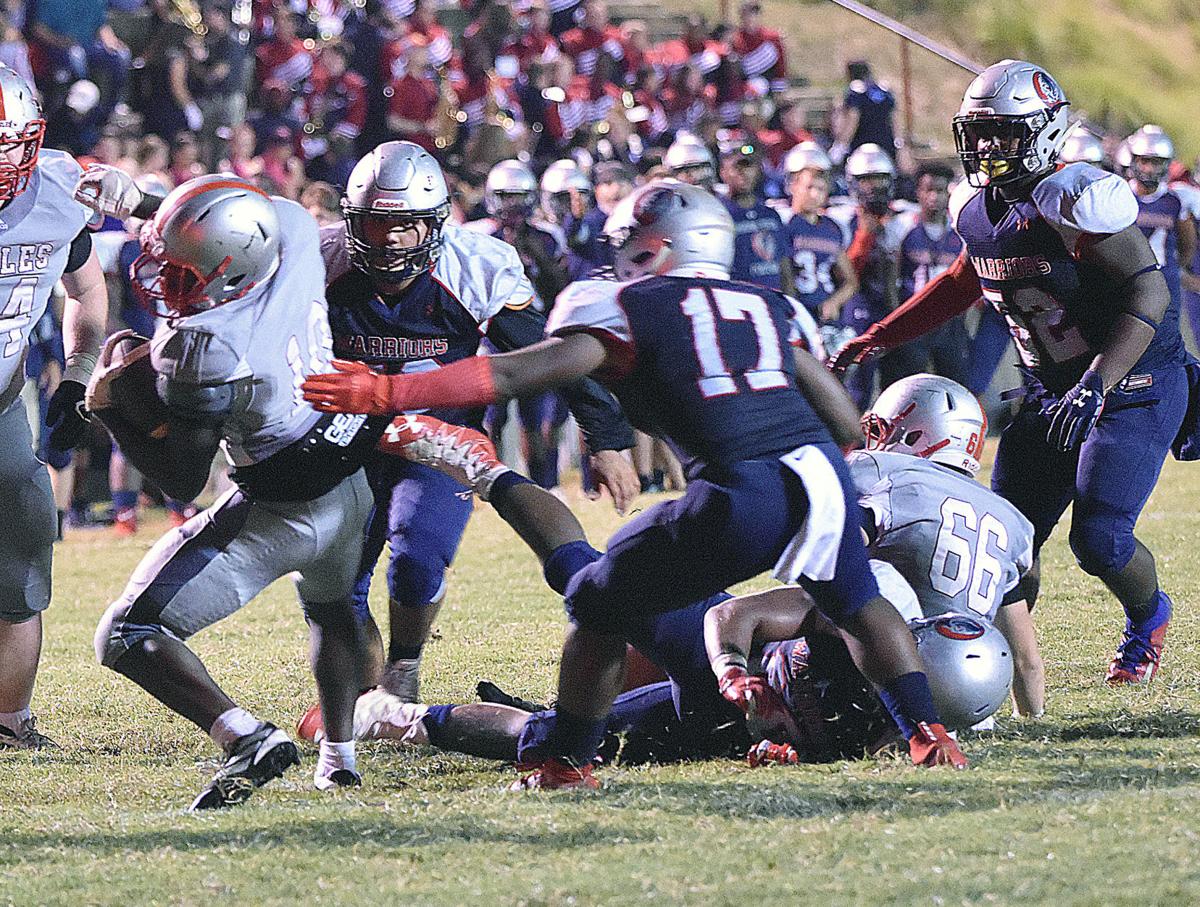 When Franklin County won at Magna Vista during the 2019 season, it marked the first time since 2005 that the Eagles had won on the Warriors’ home field since 2005. In the photo above, FCHS running back Jayron Smith bullies his way into the end zone for a touchdown.

It may have taken Franklin County three days, but the Eagles will take their second 2-0 start in as many years into their first road game of the season.

Courtesy of a 20-point third quarter, FCHS overcame two nights of postponements and two, first-half deficits to defeat visiting Magna Vista 27-20 Tuesday before a home audience at Cy Dillon Stadium/Fred M. Brown Field, most of whom waited as long to view the game as the Eagles and Warriors waited to play it.

At game’s end, first-year Eagles sideline boss Billy Miles didn’t talk about his club’s 2-0 start, nor did he mention the relief he must have felt to finally play a contest that was interrupted twice by lightning and rains.

Instead, he chose to emphasize one nine-letter word: character.

“I thought the young men of Franklin County literally took a step forward,’’ Miles said. “I’m proud of our coaches and I’m proud of our fans for hanging in there. When our kids walked out there (to the field), they were not expecting to see many fans and lo and behold, there they sat. Our fans have been very, very good to us.

“We came from behind twice and that alone is the mark of a team that’s got a little bit of character,’’ Miles said. “Coming from behind twice in a ball game shows that we’re taking a step forward. But, we’ve got a long way to go. The character that the kids are developing right now makes me feel very, very proud.’’

When the contest was resumed Monday after last Friday’s postponement, the Warriors took the opening kickoff and drove 73 yards in four plays for a 6-0 lead. Louis Taylor completed the march with a 46-yard touchdown run, the first of his three scores.

Afterwards, the lightning and the rains returned, forcing a second postponement.

Magna Vista’s loss overshadowed a 26-carry, 238-yard rushing performance by John Lieteau. The senior fullback/linebacker is one of eight players who perform on both sides of the ball for the Warriors.

Lieteau intercepted a pass in the fourth quarter deep in the Eagles’ territory which set up the Warriors’ last score.

“He was out of gas (at the end),’’ first-year Magna Vista head coach Joe Beckelheimer said. “He’s on every special team except extra point (kicks) and we went for two points every time.’’

“I thought we moved the ball well enough to win,’’ Beckelheimer said of Magna Vista’s third straight loss to FCHS in a five-game series that began in 1996. “We just came up a little short.’’

What hurt the Warriors were three fumbles, one of which was returned for a touchdown by Jason Campbell, an interception in the end zone by Devon Taylor which stymied their last scoring chance, and two potential touchdown passes that were dropped by receiver Posey Hairston, one in which he was open in the end zone, the other in which he had enough separation from his defender to reach paydirt had he caught the ball. Both passes were on fourth down.

“(Posey) gives you everything he’s got and I hate that (the dropped passes) for him. I know he’s going to think about that for a while. He’s going to have to overcome it,’’ Beckelheimer said.

Jerren Wade’s 12-yard, first-quarter scoring run and Jonathan Dudley’s extra-point kick provided the Eagles with their only points of the first half.

The Eagles scored 20 points in the third quarter despite allowing Lieteau, who had 100 yards rushing at halftime, to gain 101 on the ground that stanza.

The Eagles’ first touchdown of the period — a four-yard run by junior fullback Keith Cooper — was set up by Charles Holland’s 61-yard run on a third and 21 call from the FCHS 35.

Campbell’s fumble recovery stopped a Magna Vista drive into the red (scoring) zone. He, Lyle Board, Justin Swaine and Terry Dameron gang-tackled Taylor near the Magna Vista sideline and Campbell was able to strip the ball free before Taylor was ruled down by a official.

When Franklin County won at Magna Vista during the 2019 season, it marked the first time since 2005 that the Eagles had won on the Warriors’ home field since 2005. In the photo above, FCHS running back Jayron Smith bullies his way into the end zone for a touchdown.