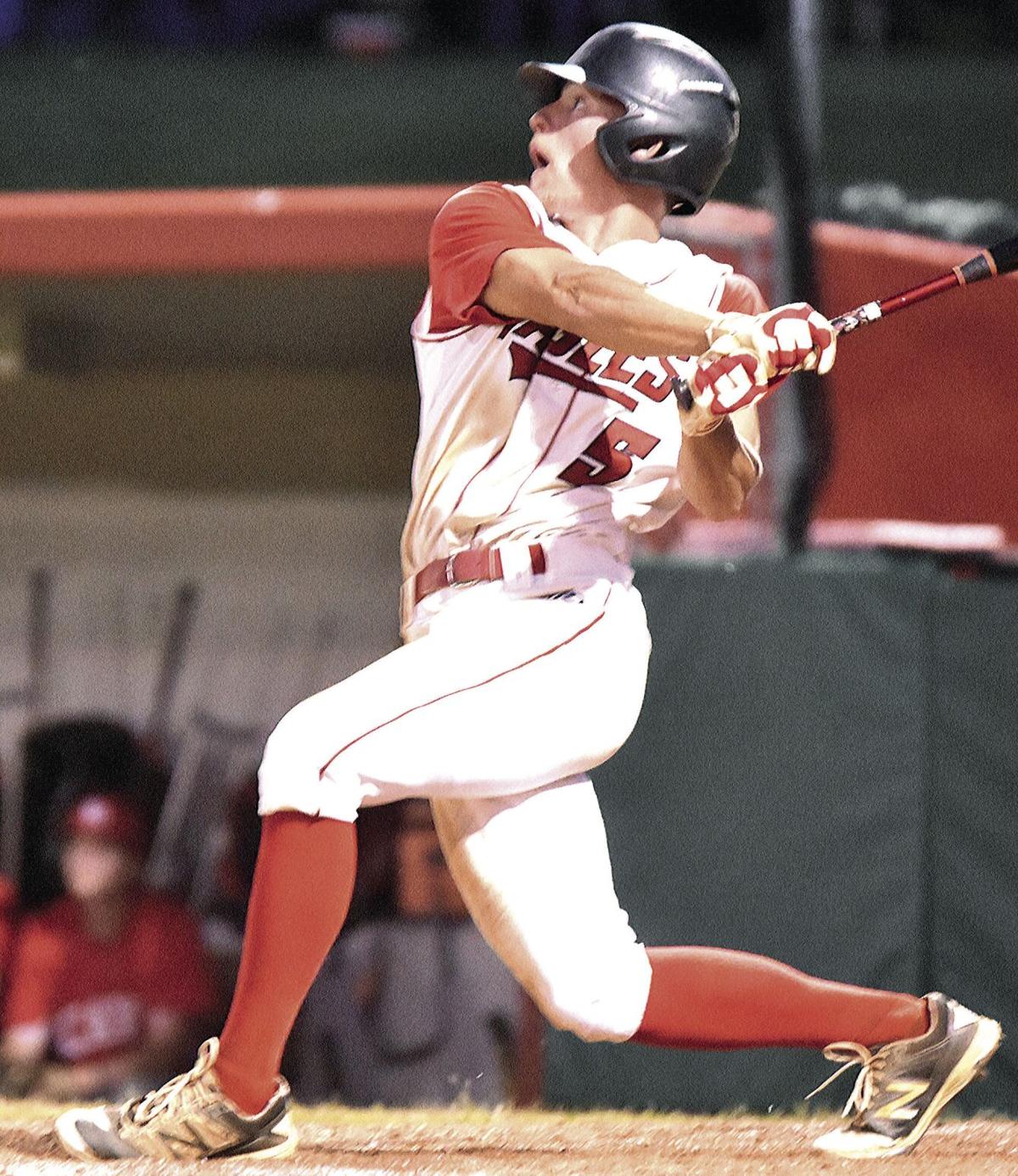 Mike Williams delivers a run-scoring double for the Eagles during a visit to the plate Friday night in an 11-2 Blue Ridge District varsity baseball triumph over Lord Botetourt at W.W. Naff Jr. Field.

Mike Williams makes a defensive play for the Eagles in centerfield. 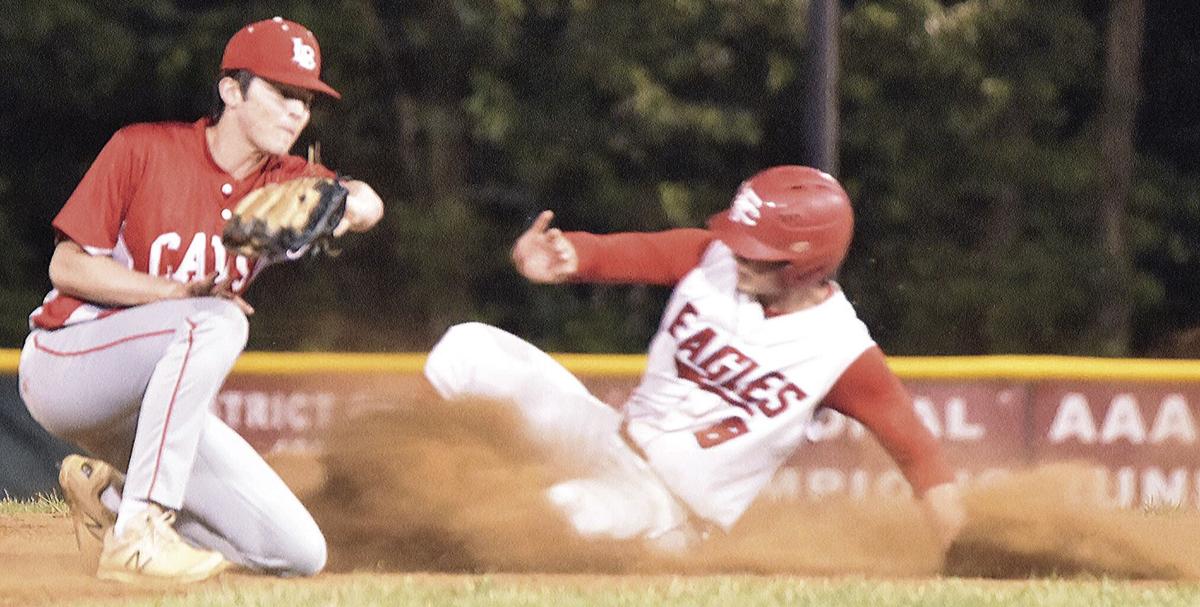 Luke Pasley raises a cloud as he slides into second base during Friday night’s victory at Naff Field, the Eagles’ second this season over Lord Botetourt and their 10th overall. 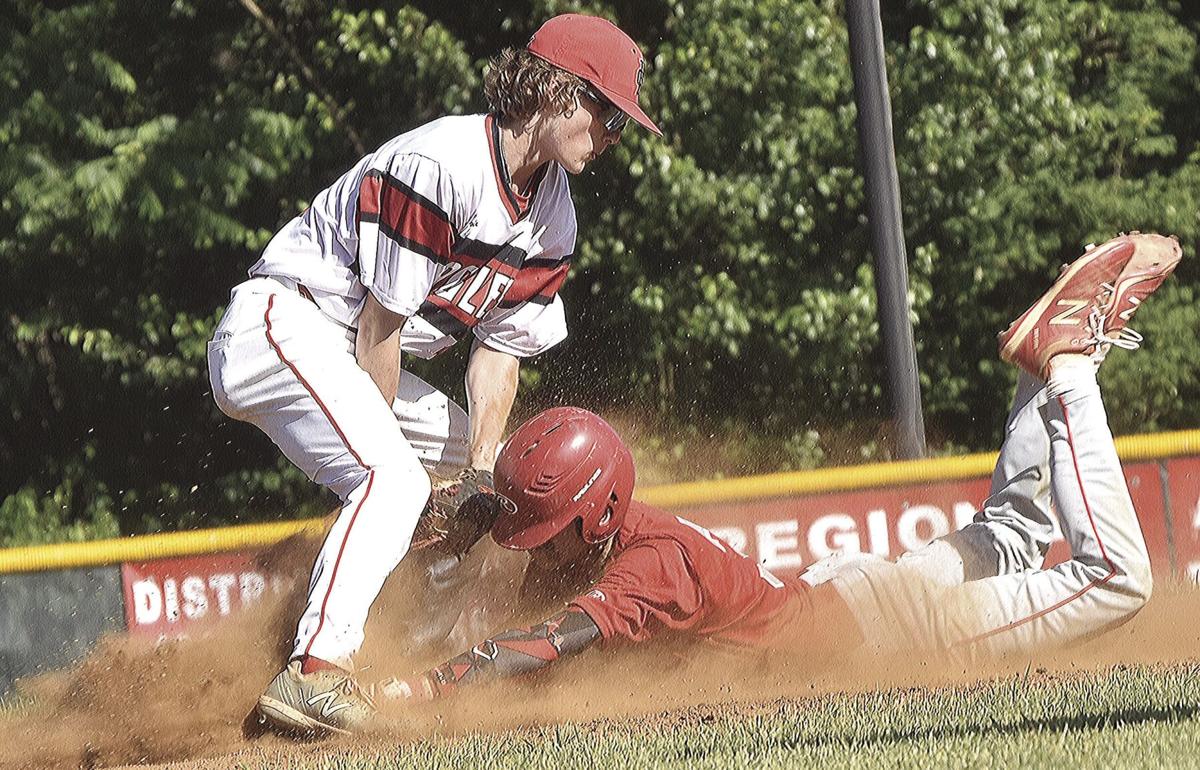 The Eagles’ victory is their eighth in a row and second this season over the Cavaliers.

Lord Botetourt. trailing 7-0 after two frames, prevented the shutout by tallying both of its runs in the top of the third.

The Eagles doubled the Cavaliers’ hit total, 12-6, and won despite committing two errors. The Cavaliers were charged with two defensive blunders.

Williams, a Radford University signee, drove in four runs; he plated runs on a double in the second inning and single in the third.

The Eagles tallied one of their four, first-inning runs on a Cavaliers’ error.

Lord Botetourt starter Colin Sell was tagged with the loss. He yielded five hits and seven runs, while striking out one in two innings.

Owen Prince was 2 of 4 at the plate to pace the Cavaliers.

The Eagles (11-1, 9-1 in the Blue Ridge District) defeated the Golden Eagles for the second time this season.

season with triumphMONETA—Franklin County scored once in the top of the second inning to break a stalemate and twice in the top of the sixth to secure a 4-1 Blue Ridge District junior varsity baseball victory over Staunton River Monday night in the Eagles’ 2021 season finale.

The Eagles finished the season, their first under the coaching direction of Todd Hill, with a 7-5 overall record, 4-4 in the Blue Ridge District.

FCHS’s triumph over Staunton River is its second this season and with it, the Eagles end a three-game losing streak.

FCHS routed Staunton River, 23-7, earlier this season and scored 10 or more runs in three other victories during the campaign.

The Eagles led 1-0 after half-an-inning before the Golden Eagles scored the equalizer in the bottom of the first.

A second-inning run by the Eagles broke the stalemate and the count remained 2-1 until the top of the sixth.

FCHS scored twice in the sixth to move in front, 4-1, then Staunton River manufactured its last run in the bottom of the stanza.

The Eagles outhit the Golden Eagles, 2-1, and each team was plagued by four errors.

A second-inning ground out by Andrew Keen enabled FCHS to break the 1-1 deadlock.

Staunton River tied the count in the bottom of the first when Alex Jordan drew a bases-loaded walk.

Lawson Pasley and Ean Amerson produced FCHS’s hits, each with one.

Konner Strong tossed a complete-game, one-hitter to earn the pitching victory for the Eagles. Strong permitted two runs, but struck out seven.

Colby Bates was charged with the loss for Staunton River. In 3 1/3 innings, he surrendered two hits and two runs, while striking out five.

Bates collected the Golden Eagles’ lone hit in three visits to the plate.

The Eagles’ loss is their third in a row and second this season to the Cavaliers.

The Cavaliers scored three runs each in the first and second innings, one run in the third, one in the sixth and two in the seventh.

In the first frame, singles by Andrew Carter and Seth Richards and a wild pitch produced a 3-0 Cavaliers’ lead.

Carter delivered his base hit with the count 2-2.

In the second, the Cavaliers pushed the spread to 6-0 courtesy of a double by Jakari Nicely, a single by Nolan Medley and an Eagles’ error.

Pitcher Jack Vargo worked 5 2/3 innings for Lord Botetourt to earn the victory. He allowed six hits, one walk and three runs, while striking out seven.

Ean Amerson, a right hander, absorbed the loss for the Eagles. He surrendered four hits and six runs in 1 2/3 innings.

Chase Bower and Lawson Pasley each had two hits for the Eagles.

FERRUM—After serving as Ferrum College’s second head men’s wrestling coach, Ryan Riggs has resigned from the post to take over the reins at th…

Franklin County completed regular-season play Thursday with an 18-11 triumph over Christiansburg in a boys varsity lacrosse match staged at C.…

Farm Bureau infielder Asher Meeks (No. 10) has a hard time getting a grip on a ground ball as shown in a series of photos from play in last we…

Barnes farms for a living, races for thrill of it

SOUTH BOSTON—Jason Barnes is immersed in one of the toughest, labor-intensive occupations there is – farming.

Mike Williams delivers a run-scoring double for the Eagles during a visit to the plate Friday night in an 11-2 Blue Ridge District varsity baseball triumph over Lord Botetourt at W.W. Naff Jr. Field.

Mike Williams makes a defensive play for the Eagles in centerfield.

Luke Pasley raises a cloud as he slides into second base during Friday night’s victory at Naff Field, the Eagles’ second this season over Lord Botetourt and their 10th overall.