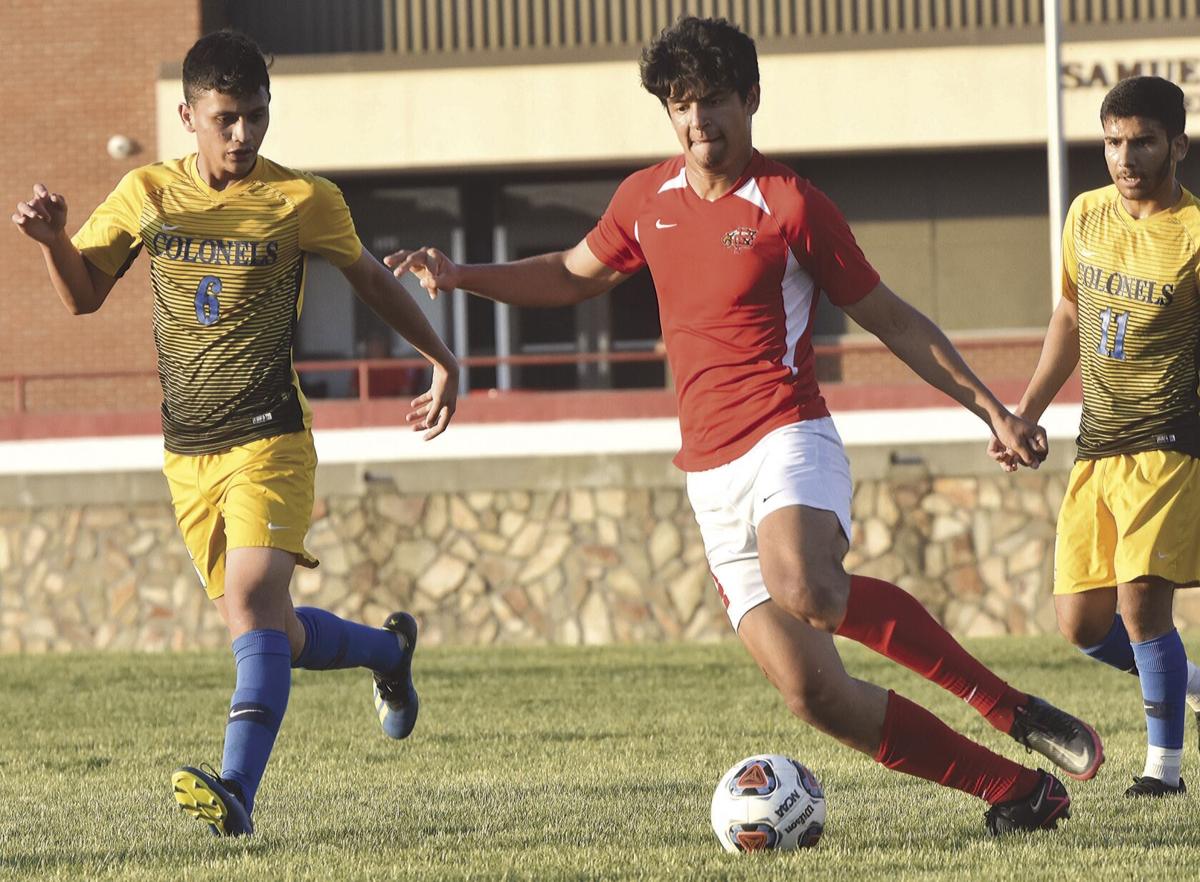 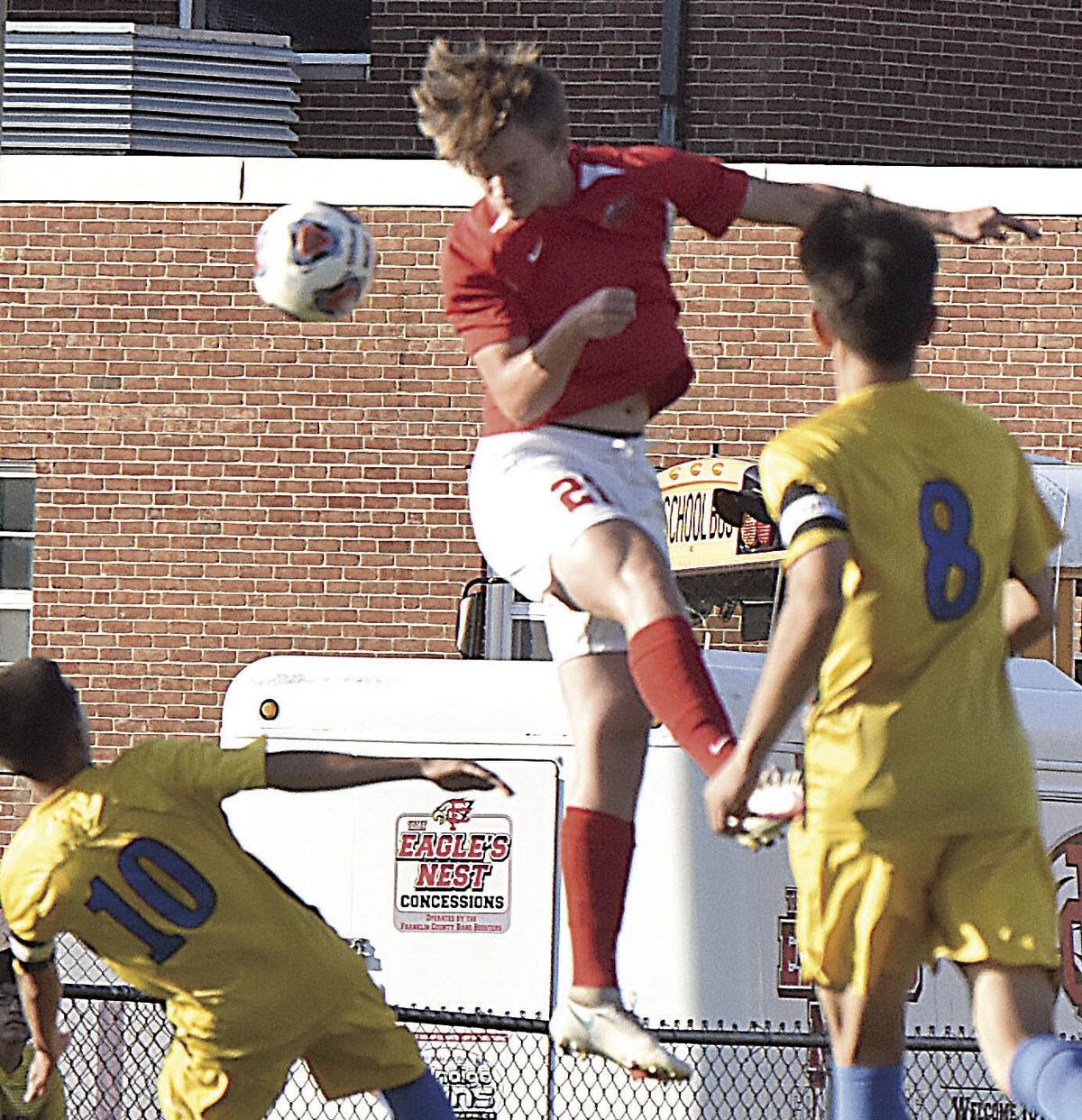 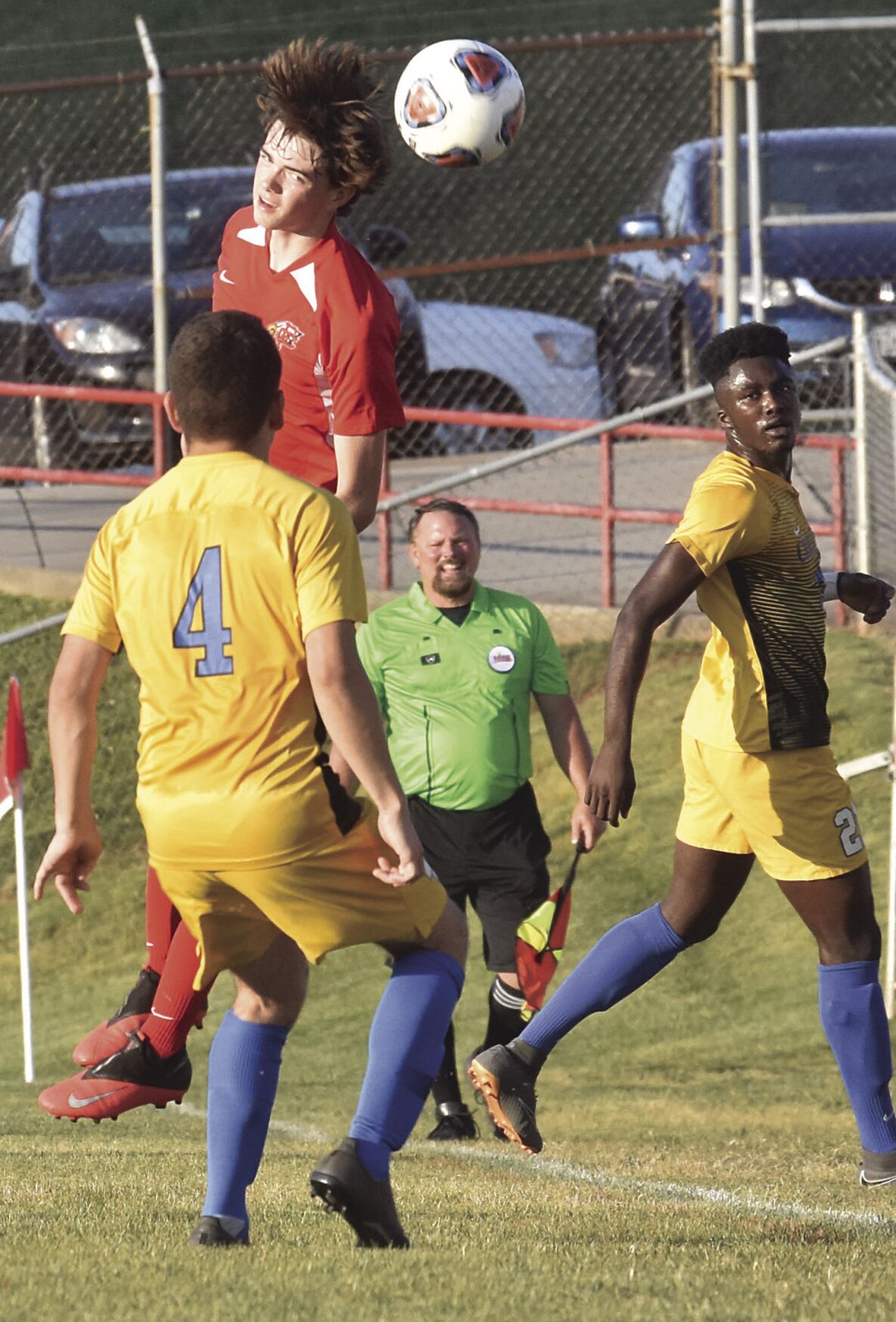 Franklin County’s Andrew Riddle wins a head ball while stationed in the middle of two William Fleming rivals and with the sideline referee viewing the action. 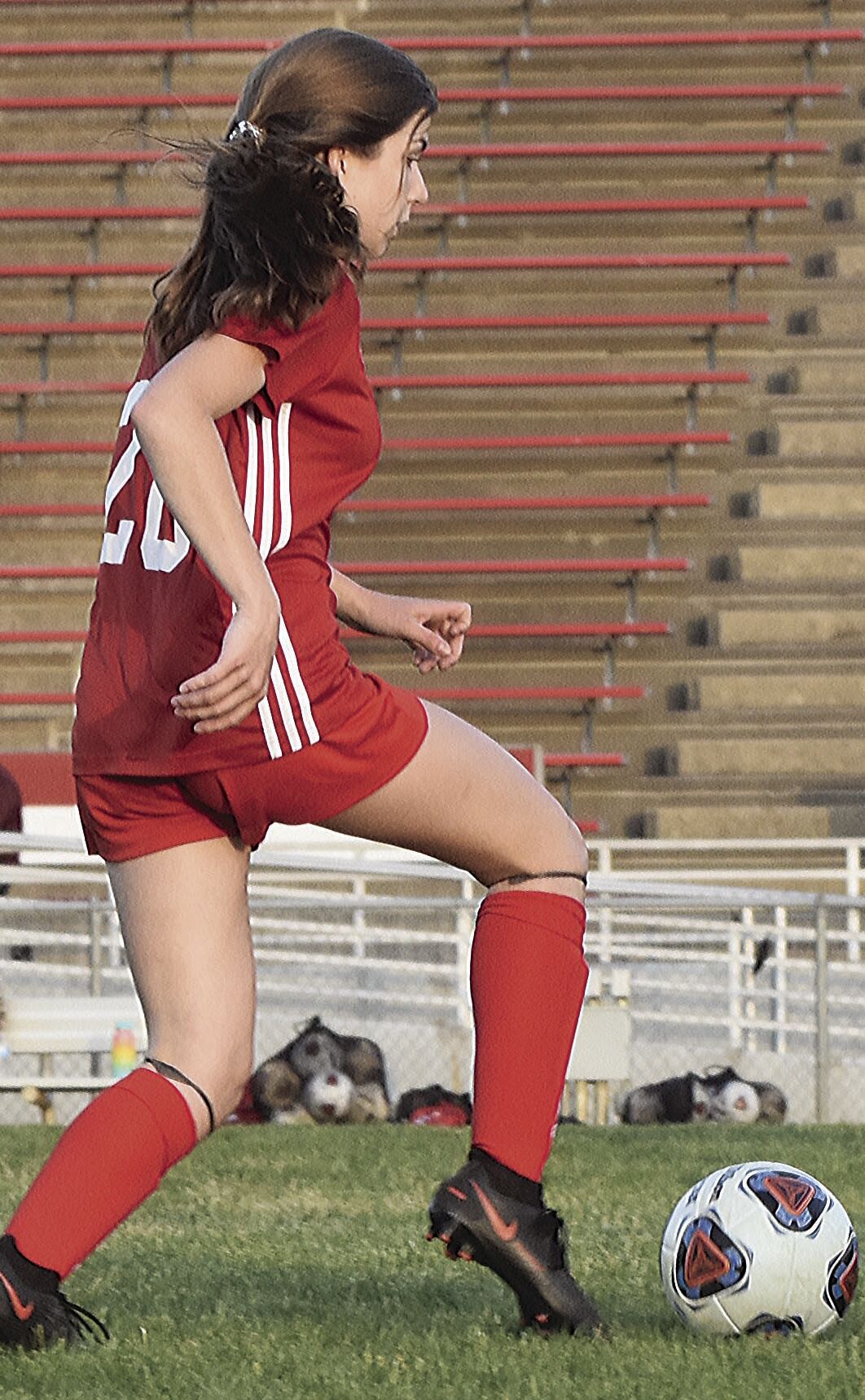 The Eagles (8-1-0, 8-1-0 Blue Ridge District) led 3-0 before Channing Scott scored in the 68th minute for the Golden Eagles to prevent the shutout.

FCHS’s victory is its second this season over Staunton River (1-5-0).

The Eagles’ roster is comprised of seven seniors, all of whom were honored with their parents and immediate family members Friday.

In the 38th minute, Oscar Garcia used an assist from Andrew Riddle to break a scoreless stalemate.

The Eagles led 1-0 at intermission.

In the 47th minute, Gavin Beckner found the back of the net; his unassisted goal produced a 2-0 advantage.

In the 55th minute. Nichols tallied the first of his two goals courtesy of a Jordan Hering assist.

In the 70th minute, Nichols took an assist from Garcia to finish the Eagles’ scoring.

Match time in Daleville is 7 p.m.

The Eagles (5-2-1, 5-2-1 Blue Ridge District) won their fourth match of the season by shutout, their second over the Golden Eagles.

FCHS netted all of its goals over a 26-minute span of play in the first half as four players accounted for the scoring.

The count was 3-0 after a goal by Will Henderson and two tallies by Joshua Boughknight.

Then, Henderson took an assist from Jonathan Castenada and registered his second goal in the 14th minute.

An unassisted score by Cooper Stanford in the 16th minute raised the spread to 5-0.

Jonathan Martinez scored in the 18th minute and Henderson completed a hat trick—three goals scored—in the 26th minute courtesy of an assist from Castenada.

The Eagles’ defense—anchored by Jack David, Peter Ohlerich and Dalton Lee—yielded only one shot on goal.

Evan Furrow and Stanford saw action in goal for FCHS and combined for the shutout.

“The balanced Eagles midfield dominated possession of the ball for most of the match, limiting the Golden Eagles’ attack,’’ McClung said.

With the win, the Eagles avenge an earlier season league setback to the Golden Eagles by a 2-1 count at home.

Maddie Chitwood and Sophia LaBrake scored for the Eagles.

Both matches kick off at 7 p.m.

MONETA—Franklin County’s girls junior varsity soccer team scored once in the first half and twice after intermission Friday for a 3-1 victory over Blue Ridge District foe Staunton River.

David Campbell made his head coaching debut in the victory.

“I was really proud of the way the team played. This being my first game with this team, and not having the luxury of seeing them play, I didn’t know what to expect,’’ Campbell said.

“I was only able to have two practices with them prior to the game. Needless to say, I was happy with the outcome.’’

The Eagles were victorious despite being outshot, 12-7.

“It was a great win on the road in bad weather,’’ Campbell said. “You can’t ask for much more than that.’’

The Golden Eagles scored their lone goal with seconds remaining in the match to prevent the shutout.

The Eagles led 1-0 at intermission after Maggie Hypes rebounded a deflection on the left side of the penalty box and dissected the back of the net with a shot with 15:55 showing.

Also, Hypes distributed an assist for the Eagles.

“I was really happy with the play up front,’’ Campbell said. “Maggie and Brooklyn teamed up a lot, and Brandi controlled the ball and fed passes beautifully.’’

Altice made the count 3-0 when she drove the ball through a Staunton River double team and placed a shot just under the crossbar from the left side from 23 yards.

Multiple touches by Altice and Hypes set up Altice’s goal.

“(Our team) showed a lot of fortitude and grit, and that’s something that you can’t coach. That desire and drive is what carried (us). The weather was terrible and we were soaked to the bone, but we dug in and embraced it,’’ Campbell said.

“Of course, there are things we want to work on, and we’ll begin taking a look at those (this week). I want us to possess the ball better and for a greater length of time, and I want us to be more patient and precise in our pass options,’’ Campbell said.

“Defensively, I’d like to see us shifting as a unit a bit more and contracting when the other team is attacking. We had elements of that (Friday), so I’m sure we can strengthen it,’’ Campbell said.

“Brooklyn, at attacking midfielder, pretty much owned the field—she just always seemed to be there,’’ Campbell said. “She, Muna Seagle and Lauren (Henry) are eighth graders we pulled up after BFMS’s season ended.

“Muna played right forward for us and not only held her own, but really contributed to our possessions and shot attempts.

“Lauren is a natural defender who also possesses the speed to catch up to through-balls and long balls,’’ Campbell said. “Also, she can chase down a defender and make the tackle. She was crucial as one of our center backs.’’

FCHS completes its season this week with two matches at Dillon Stadium, both against district opponents.

Franklin County skateboard enthusiasts will have the opportunity to display their skills at Go Skateboarding Day, Monday, June 21.

Rouse, Sheehan are honored for academics

FERRUM—Seniors Cade Rouse and Jack Sheehan, both of whom played football for Ferrum College during a campaign that was pushed back to the spri…

Franklin County’s Andrew Riddle wins a head ball while stationed in the middle of two William Fleming rivals and with the sideline referee viewing the action.