A Ferrum College lineman tries to get Emory & Henry College defender Tyler Tune (No. 94), a former Franklin County prep standout, away from Panthers quarterback Harvey Taylor (No. 11). In the background is Wasps head coach Curt Newsome. 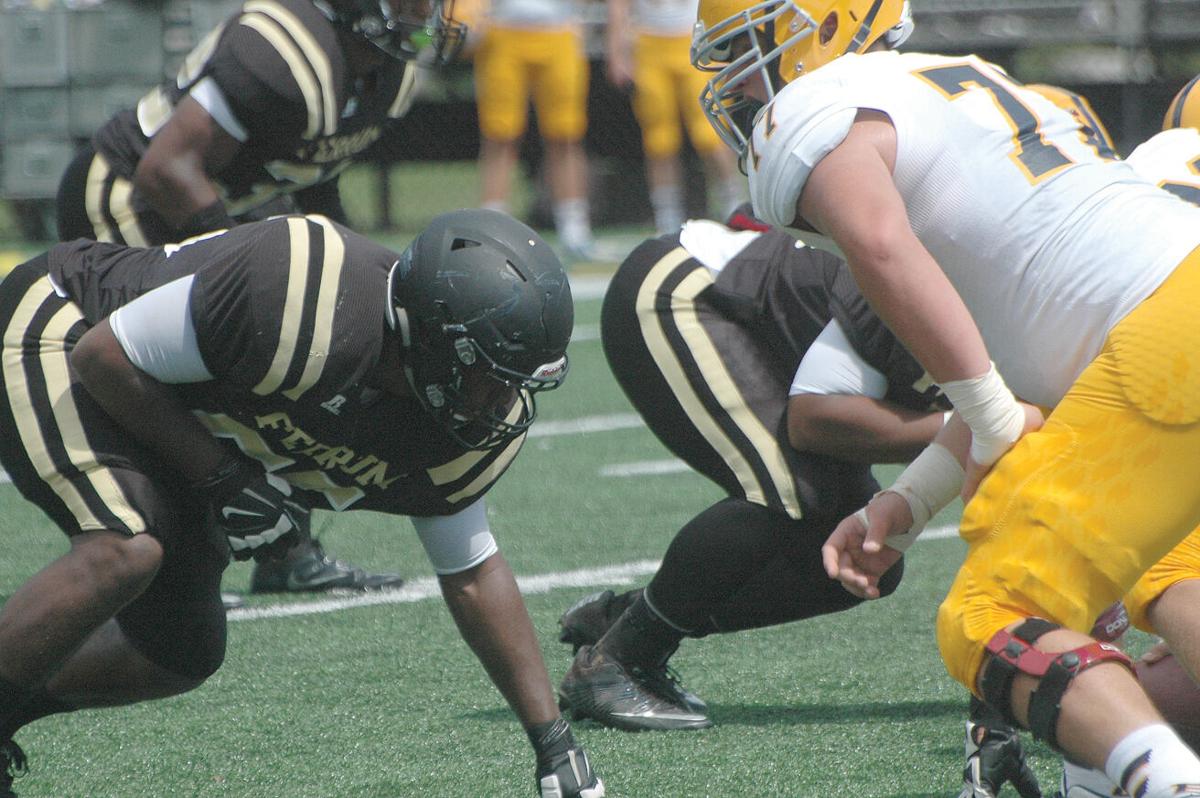 Former Franklin County prep stars Alveno Matthews (left) for Ferrum College and Tyler Weterrings (right) for Emory & Henry College square off against one another in a contest between the Panthers and the Wasps at W.B. Adams Stadium.

FERRUM—With Emory & Henry College’s (E&H) planned move to NCAA Division II in all sports, a football rivalry with Ferrum College, one noted for its duration, fan and alumni appreciation and dramatic finishes in many of the match-ups is likely to end.

Yes, the Panthers and the Wasps could play as non-conference opponents once again when E&H advances one rung on the NCAA’s competitive ladder, but that is not likely to happen.

The majority of the match-ups in the rivalry, one that dates to 1985—Ferrum’s first year in NCAA Division III, are non-league ones.

When a 2021 spring campaign commences to make up for last fall’s season postponement due to the COVID-19 pandemic, the Panthers and the Wasps will meet for a third time as Old Dominion Athletic Conference (ODAC) foes.

“I am a person who never says never, but I don’t see the series continuing once E&H leaves Division III,’’ Ferrum Director of Athletics John Sutyak said in an email.

“I know that is tough since we have formed a nice rivalry with them as part of the Crooked Road Classic (each of the last four games in the series has carried this moniker and each team has two wins to its credit). However, playing outside the Division doesn’t have any benefit for us as program unless there is a financial guarantee, so our focus will remain on competition within Division III,’’ Sutyak said.

E&H is on all of Ferrum’s athletic schedules for the 2021-2022 academic year, Sutyak said. According to a release from E&H, the college would begin its first Division II provisional year in August 2021 and its second the following year with “an anticipated full South Athletic Conference schedule’’ pending NCAA approval.

In Division II, E&H is permitted to award 36 scholarships in football.

The Wasps and the Panthers have squared off as non-conference regular-season foes 32 times and postseason opponents once: in 1987 when E&H routed Ferrum 49-7 in the opening round of the Division III playoffs at Roanoke’s Victory Stadium.

That season, E&H was picked to finish last in the ODAC in a preseason coaches’ poll.

Neither past E&H coaches Lou Wacker nor Don Montgomery, the coach Newsome replaced, was victorious in his first outing against Ferrum.

A nine-game series Ferrum losing skid ended with that victory, its first in the set since 2005, the last year the Panthers qualified for postseason play. There were two forfeits by E&H during that set of games, but Ferrum opted not to accept those forfeits.

Because of a scheduling snafu, the teams did not play in 2006, Montgomery’s second year as head coach, but E&H returned to the slate in 2007 and routed Ferrum, 50-7 (that turned out to be the first forfeited game) at Adams Stadium.

Besides regular-season match-ups that were staged on the campuses of the teams, Ferrum won at Salem Stadium-Willis White Field in 1987 and the teams have split games played in 1988 and 1992 at Franklin County High School’s C.I. (Cy) Dillon Stadium-Fred M. Brown Memorial Field.

The 1988 contest marked the Ferrum debut of Chris Warren, who had transferred from the University of Virginia in the offseason. The victory was career win No. 199 for Hank Norton. The following week, Norton claimed his 200th triumph when the Panthers routed reigning national champion Wagner in its season opener., 40-13.

Besides, Norton, Davis and Grande, David Harper coached games in the series.

The spring, first-year Panthers head coach Cleive Adams joins the group, but his role in the rivalry dates to his days as a Ferrum player and as an assistant coach. Also, Adams coached against E&H while on staff at Washington and Lee University.

Norton and Wacker both are members of the Virginia Sports Hall of Fame. The two were high school coaching rivals in the Richmond area before they joined the college ranks. The two died one month apart in 2019—Norton on January 16 at age 91, Wacker on February 15 at age 84.

Naff continues to seek legal remedies with regards to his firing

A Ferrum College lineman tries to get Emory & Henry College defender Tyler Tune (No. 94), a former Franklin County prep standout, away from Panthers quarterback Harvey Taylor (No. 11). In the background is Wasps head coach Curt Newsome.

Former Franklin County prep stars Alveno Matthews (left) for Ferrum College and Tyler Weterrings (right) for Emory & Henry College square off against one another in a contest between the Panthers and the Wasps at W.B. Adams Stadium.