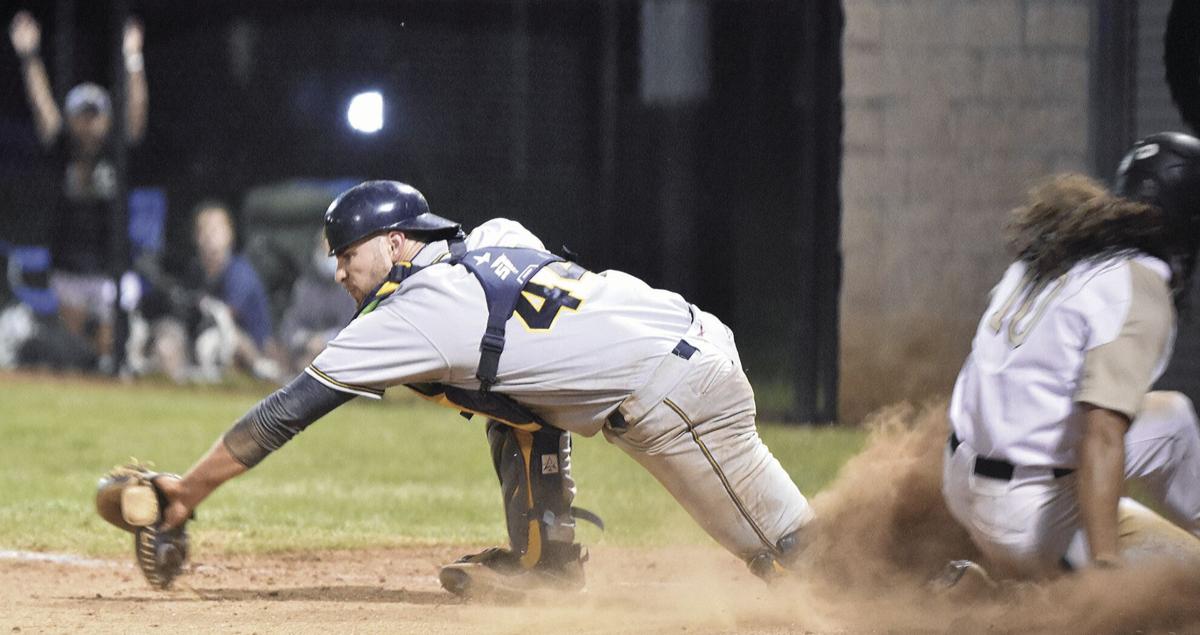 Ferrum College senior Josh Greenway raises a cloud of dust as he slides safely across the plate with one out in the bottom of the ninth inning to give the Panthers a 9-8 Old Dominion Athletic Conference (ODAC) baseball victory over Emory & Henry College at W.B. Adams Field. In the background a Ferrum fan acknowledges the winning play. 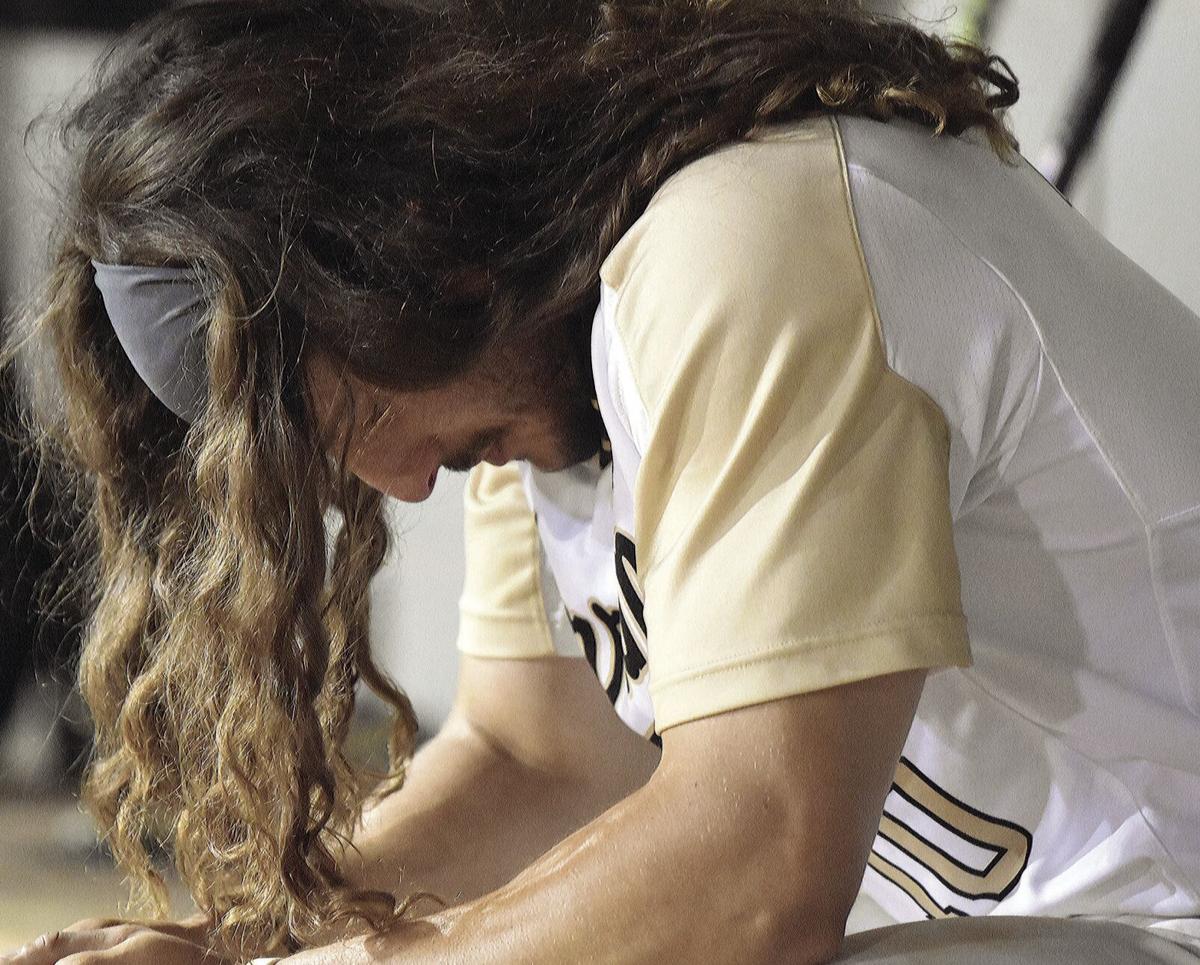 Josh Greenway is lost in his thoughts as he sits quietly in Ferrum College’s dugout moments after scoring the winning run in the Panthers’ 9-8 Old Dominion Athletic Conference (ODAC) baseball victory over Emory & Henry College Tuesday.

FERRUM — What will likely be senior Josh Greenway’s final college baseball game as a player at W.B. Adams Field ended in story-book, fairy-tale like fashion.

With the bases loaded in the bottom of the ninth inning, Greenway, who hails from Roanoke and who prepped at North Cross School, dashed home on Clayton Michael’s infield grounder to third and slid safely across the dish just ahead of an Emory & Henry College throw to the plate to give Ferrum College a 9-8 Old Dominion Athletic Conference (ODAC) triumph.

The result of the play set off a celebration by the Panthers (9-20, 6-14 ODAC). Michael was mobbed by his teammates behind the first-base bag as the Wasps (5-15, 4-15 ODAC) exited the field in defeat.

With the win, the Panthers avenge an earlier-season loss to the Wasps and they keep their hopes of making the conference’s postseason tournament alive, albeit, those hopes are faint.

Ferrum and Eastern Mennonite are tied for the eighth and final tournament seed going into this weekend’s action, each with six wins.

Virginia Wesleyan University has five victories and holds the tiebreaker over Ferrum based on its regular-season series sweep of the Panthers. The Marlins and the Royals split their two-game, regular-season set.

The Royals’ weekend series against Roanoke College has been canceled; the Maroons canceled each of their last three games because of COVID-19 issues. Their availability for the tournament is uncertain.

Ferrum finished regular-season play today in Ashland with a doubleheader against Randolph-Macon College, which is in first place in the ODAC, while Virginia Wesleyan plays last-place Guilford (N.C.) College in its final, regular-season twin bill Saturday in Greensboro.

Tuesday, the Panthers led 8-3 through seven innings before the Wasps squared the count courtesy of a five-run surge in the top of the eighth.

In the frame, Emory & Henry used a Connor Buchanan double, a sacrifice fly by Caleb Haynes and a three-run home run by Hayden Milley to manufacture its five runs.

In the last of the ninth, Greenway reached first on an infield single, stole second and moved to third on a sacrifice bunt by Grayson Chitwood (Franklin County).

Afterwards, Matt Yarbrough and Justin Brady each received an intentional walk as Emory & Henry loaded the bases to set up force outs at every base.

Thus the stage was set for Michael’s grounder and Greenway’s dash home.

“Our guys never give up and continue to grind out games even when things don’t go our way,” Panthers skipper Ryan Brittle said.

“It’s really a testament to the seniors on our squad as they lead the way for us. I look forward to getting after it (today).”

Ferrum is 3-3 this season in one-run games; both of its encounters against Emory & Henry are one-run affairs.

The Panthers are 5-8 at Adams Field this season.

The Wasps took a 2-0 lead in their half of the first on Milley’s first home run of the contest.

In the bottom of the frame, the Panthers turned the deficit into a 3-2 edge as Chitwood and Yarbrough delivered RBI singles.

Nathan Treadway belted a home run to left field in the top of the second for the Wasps.

The Panthers broke the 3-3 draw until Yarbrough broke the stalemate in the bottom of the third with a sacrifice fly.

In the fifth, Yarbrough smacked a two-run home run to left field to put Ferrum in front 6-3.

In the sixth, Grey Sherfey drove in a run and scored a run to raise the ante to 8-3.

Mitch Custer (1-1), the last of three pitchers employed by the Panthers, claimed the victory in relief, his first of the season to square his record. He yielded one hit and struck out one in 1 2/3 innings of work.

Starter Carlton Redd departed the mound in favor of Matthew Sheppard in the seventh. He allowed nine hits, two of which were home runs, three walks and three runs, all earned, while striking out one. He faced 31 batters.

Sheppard surrendered four hits, including Milley’s game-tying homer, and five runs, four of which were earned in one frame of action. He faced eight batters.

Emory & Henry also used three pitchers. Jordan Smith (1-1), the last of those pitchers, was tagged with the loss.

Franklin County opens fall preseason football practice in preparation for its season opener at home against Bassett on Aug. 27.

Parris is transferring for final year of play

Although year-round workouts are the norm in Virginia high school athletics, the traditional fall opening of football practice remains as an e…

Changes are made to area's premier prep tournament

TROUTVILLE - Changes have been made to the area’s premier high school golf tournament, which returns to sport’s calendar early next month afte…

Harper steps down as Knights' coach, hands reins off to Harris

After 32 years of coaching, most of which were spent at his alma mater, former Ferrum College head football coach David Harper is stepping dow…

Harvey, Hughes are honored by IWLCA

Ferrum College senior Josh Greenway raises a cloud of dust as he slides safely across the plate with one out in the bottom of the ninth inning to give the Panthers a 9-8 Old Dominion Athletic Conference (ODAC) baseball victory over Emory & Henry College at W.B. Adams Field. In the background a Ferrum fan acknowledges the winning play.

Josh Greenway is lost in his thoughts as he sits quietly in Ferrum College’s dugout moments after scoring the winning run in the Panthers’ 9-8 Old Dominion Athletic Conference (ODAC) baseball victory over Emory & Henry College Tuesday.