You are the owner of this article.
Edit Article Add New Article 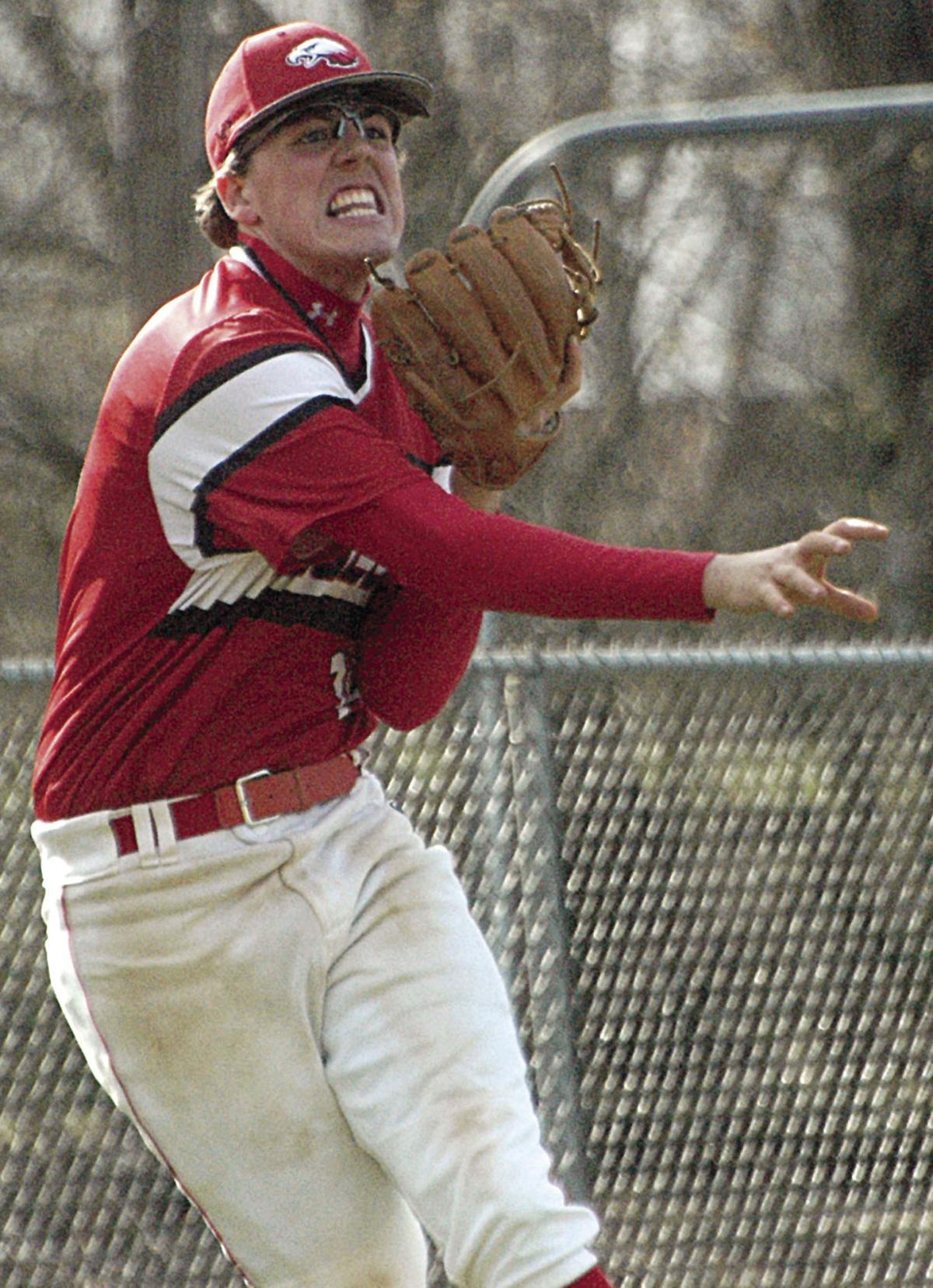 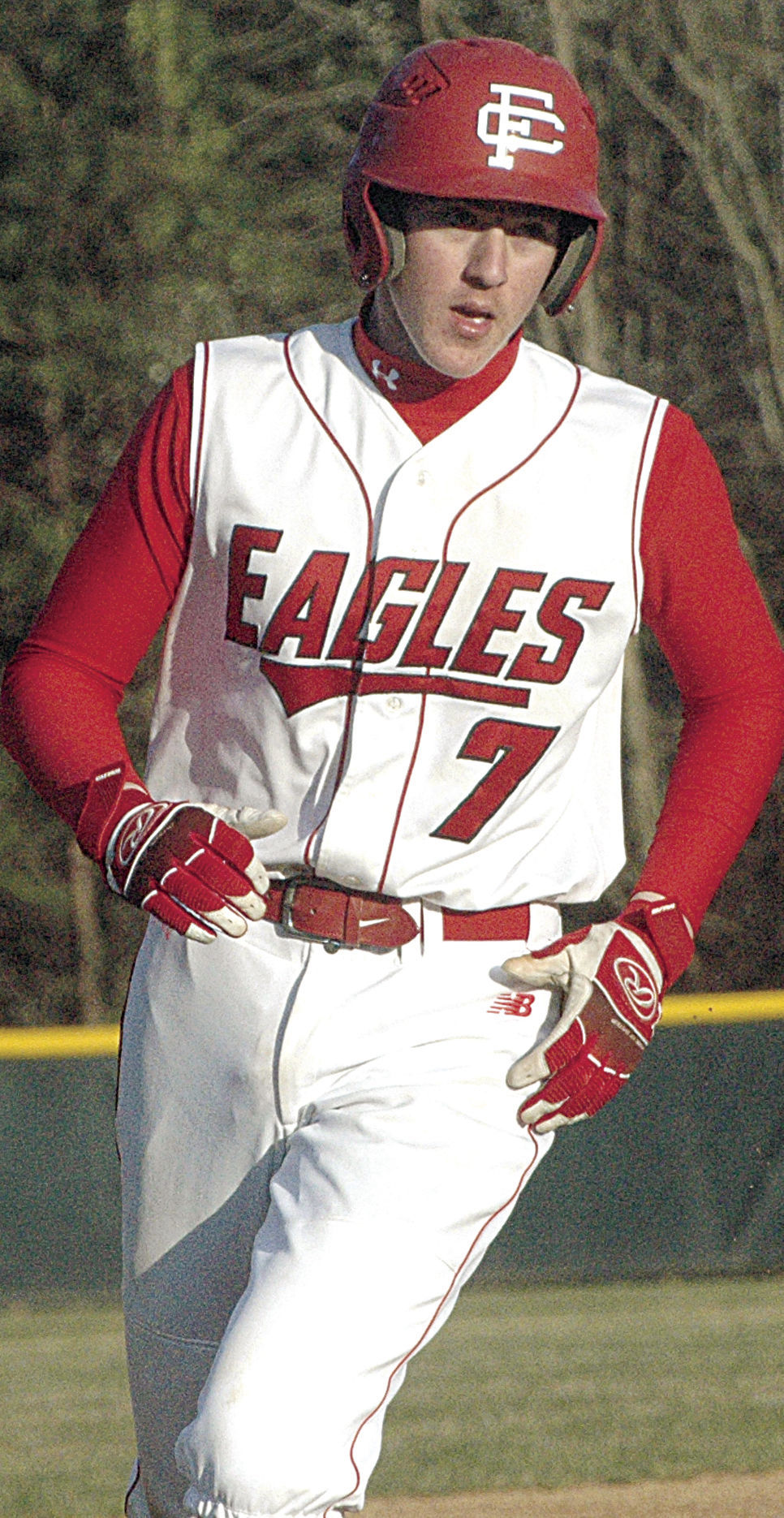 Franklin County senior Brayden Merrick, who started at shortstop last season for the Eagles, circles the bases after belting a home run during a game played at W.W. Naff Jr. Field. Merrick is expected to make a commitment to NCAA Division I Virginia Tech binding today when he signs a national letter-of-intent with the Hokies.

Both are expected to sign national letters-of-intent: Kent with Charleston Southern (South Carolina) University of the Big South Conference and Merrick with Virginia Tech of the Atlantic Coast Conference (ACC).

Today is the first day that senior student-athletes can make their commitments in such sports as baseball and softball, at the NCAA Division I, NCAA Division II or NAIA levels, binding.

Kent, who saw action at third base and first base for the Eagles last season, earned second-team Class 6 Region B accolades as a junior.

Kent, who begins his third varsity campaign for the Eagles this spring, is the son of Ferrum College assistant coach and former Radford University head coach Lew Kent.

As a junior, Kent batted .356 with six doubles, one triple, five home runs and 32 RBIs. He has belted nine home runs in his career.

FCHS begins play in the Blue Ridge District this spring.

VIRGINIA BEACH — Ocean Lakes, the No. 2 seed from the East Division, rallied from an opening-set loss for a 3-1 victory over Franklin County, the No. 4 seed from the West Division, in the semifinals of the Class 6 Region A volleyball tournament.

FCHS (13-13), playing in a regional semifinal for the third straight year, ends its season with the loss.

Kaitlyn Dula finishes her second year as the Eagles’ head coach; her career record is 34-20.

Ocean Lakes (18-6) played Floyd E. Kellam, the No. 1 seed from the East Division, for the regional championship Saturday and Kellam was victorious, 3-2.

Kellam earned its berth in the regional final by besting Cosby, the No. 3 seed from the West Division in the semifinals.

Ocean Lakes and Kellam represent Region A in the Class 6 state tournament.

Region A is bracketed with Region B in the state quarterfinals.

The Region B representatives are Battlefield and Massaponax.

FCHS is 0-7 this season against teams that are playing for state championships: one each to Ocean Lakes and Massaponax in Class 6, Albemarle in Class 5, Grafton in Class 4, Hidden Valley in Class 3 and twice to Lord Botetourt in Class 3.

The Eagles (9-1), who finish the season with a two-game winning streak, and the Terriers were tied at 16 in the second stanza before FCHS responded with its run of points.

Zac Stafford scored two touchdowns, both rushing for the Eagles and Reid Davis ran for one score.

Also Ja’ziem Hart returned a punt for a TD and caught a scoring pass for a second score.

The Eagles made four 2-point conversions.

Current head coach Mike Guecia, who completed his third year as head coach with Thursday’s win, has guided the Eagles to 23 of those victories.

DANVILLE — Twenty-eight Ferrum College wrestlers, 13 of whom placed among the top six finishers in their weight classes, competed in Sunday’s Cougar Open, hosted by Averett University at the E. Stuart James Grant Center.

White was seeded third, but finished 4-0. He won two bouts by pin and bested top seed Sam Braswell of Averett, 8-6, in the finals. Braswell is a season removed from qualifying for the NCAA Division III nationals.

Barr was the No. 1 seed and finished 3-0 with one victory by pin. In the finals, he won by decision, 6-3, over Stephon Halliburton of Queens (North Carolina) University.

Elijah Martin, competing at 157 pounds, finished second; he was 3-1 with one triumph by pin.

Cullen Nash-Cleek, competing at 197 pounds, was 2-1 en route to a second-place finish and Carlos Leyva, competing at 285 pounds, came in second with a 3-1 record. He won two bouts by pin.

Braden Homsey, competing at 197 pounds, lost his first bout, but rallied to win four in a row for a third-place finish. He claimed one of those bouts by pin.

Jacob Grady, competing at 174 pounds, wrestled six bouts; he was 5-1 and finished third.

Placing fourth were J.D. McMillin at 125 pounds, Caden Dalton at 149 pounds and Isaac Hudson at 165 pounds.

Placing fifth were Galilee Kissell at 165 pounds and George Mitchell at 285 pounds.

“(The tournament) was a mixed bag. I thought we did some things well and bounced back after a few early losses, but we still have a lot of mistakes to fix,’’ Ferrum head coach Nate Yetzer said.

“Malik and Jalen did a great job winning titles. I’m proud of the effort so many of our guys displayed,’’ Yetzer said.

Ferrum is hosting two events this weekend at the Salem Civic Center.

Besides Ferrum, Millikin is wrestling Greensboro (North Carolina) College, Washington and Lee University and Averett in the event.

Otterbein and Millikin are entered in the Star City Classic.

The Eagles’ victory is their fourth this season and their third in a row.

Also scoring were Kaniah Copeland with four points, Aleah Davis and Maggie Hypes each with two points and Maddie Caron with one point.

Against Read Mountain, BFMS led 19-14 at halftime after outscoring the visitors 10-7 in the first quarter and 9-7 in the second stanza.

Read Mountain equaled the count at 21 in the third period, then it broke that deadlock with a 5-0 scoring spurt.

BFMS trailed by four, 27-23, until Javier Holland netted the last four points of the quarter for the Eagles to produce a stalemate.

Read Mountain, which netted 30 points after intermission, outscored BFMS 17-6 in the final frame to earn the victory.

BFMS trailed by one twice in the quarter, 31-30 and 33-32, before Read Mountain tallied 11 of the game’s final points, nine of which it scored consecutively.

Five players scored for Read Mountain, two of who finished in double figures with 13 and 12 points. Three other players accounted for 19 points.

Mattox swished both of his team’s 3-point field goals.

BFMS returns to action Thursday at home against Hidden Valley Middle School. Tip off is 5 p.m.

The YMCA is on 235 Technology Drive in Rocky Mount.

Youth ages 6 and younger are admitted free of charge.

Richards is a scholarship recipient

Brian Richards, a Franklin County graduate and former Eagles prep wrestling standout, is one of four recipients of the Stan Parker Memorial Sc…

DGIF hopes to attract a larger audience by changing its name

Reflecting what it says is the changing character of outdoor recreation, the state agency long known for its attachment to the hunting and fis…

From the volleyball court to politics

RANCHO SANTA FE, Calif. – World TeamTennis (WTT) brings the sport back after a world-wide shutdown from the COVID-19 pandemic when its players…

Franklin County senior Brayden Merrick, who started at shortstop last season for the Eagles, circles the bases after belting a home run during a game played at W.W. Naff Jr. Field. Merrick is expected to make a commitment to NCAA Division I Virginia Tech binding today when he signs a national letter-of-intent with the Hokies.