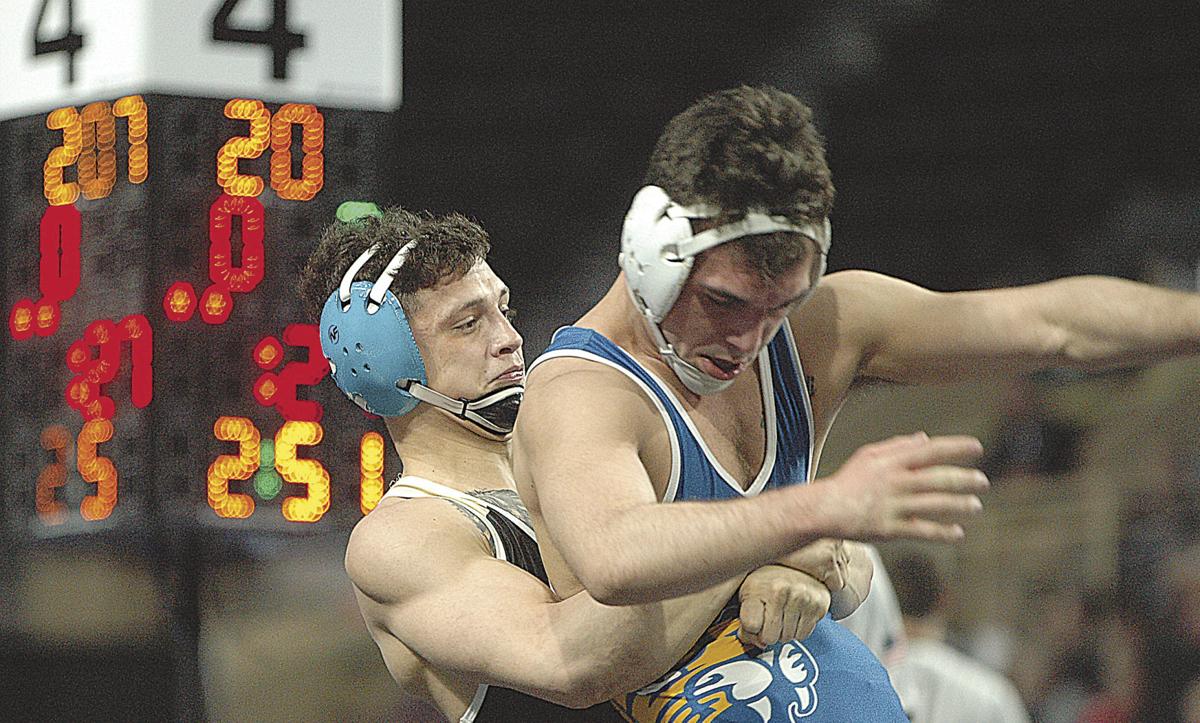 Mario Vasquez, competing for Ferrum College in the 2019 NCAA Division III wrestling national championships at the Berglund Center, prepares to slam his opponent during a bout in the 141-pound weight class. The tournament is returning to Roanoke in 2023 and for the second time, Ferrum is the host school. 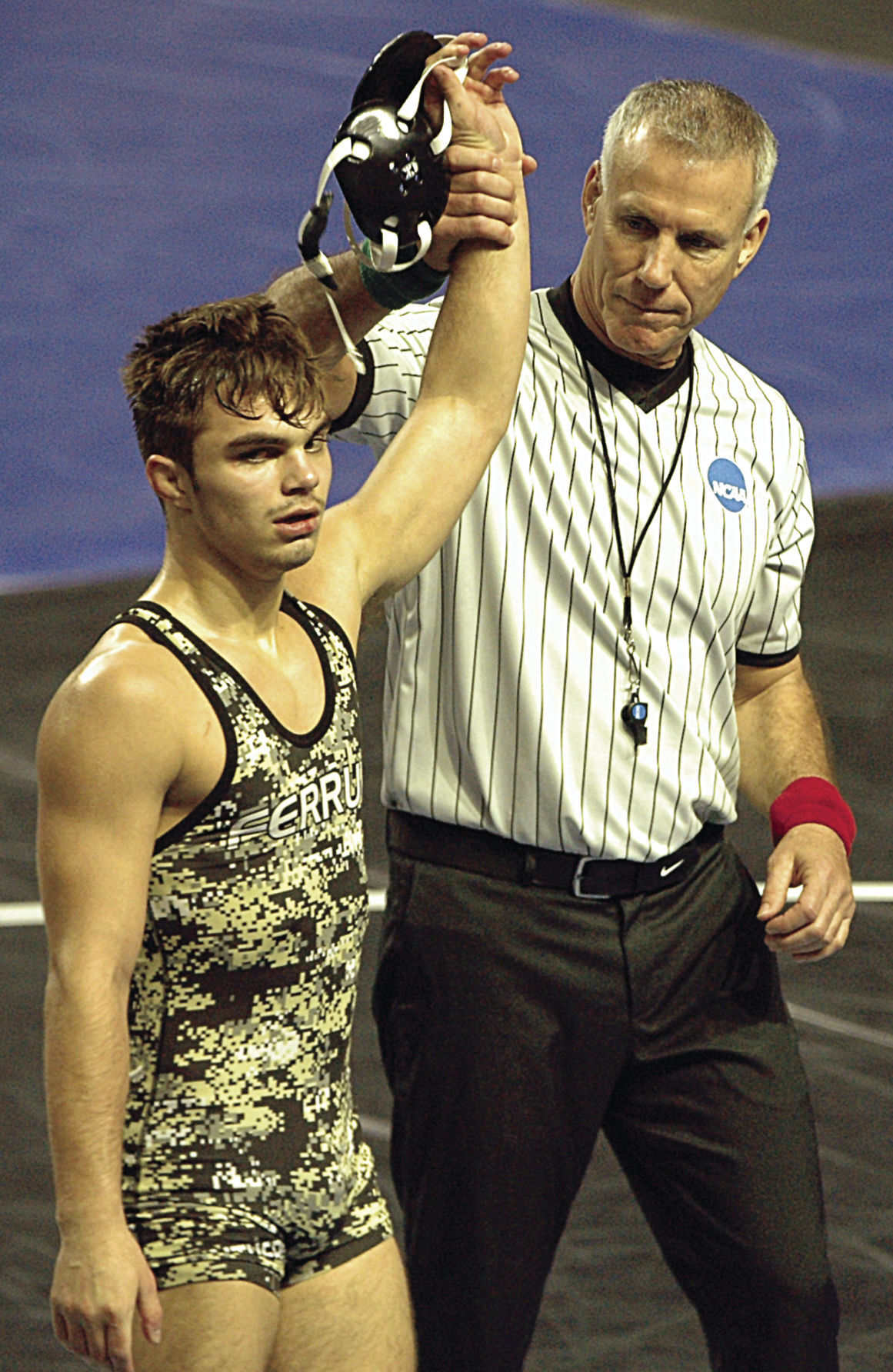 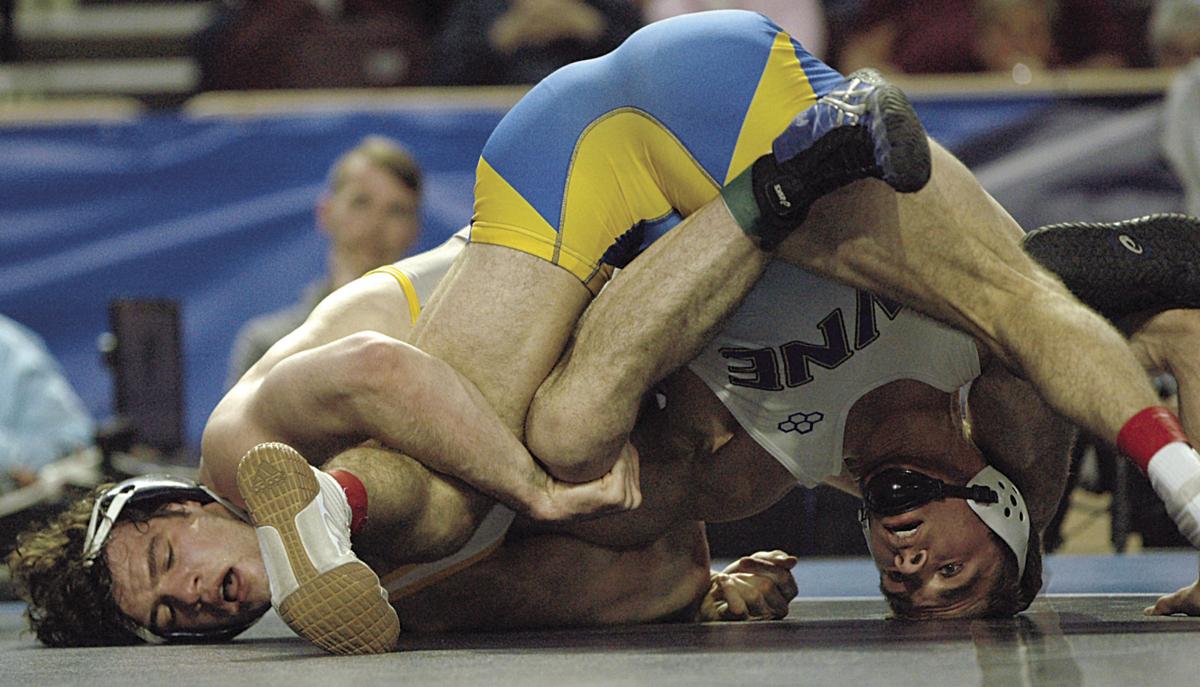 A pair of competitors battle for a individual national champion on the final night of action in the 2019 NCAA Division III national wrestling tournament at the Berglund Center. In the finals, the mat is placed on an elevated platform.

ROANOKE — After staging the tournament for the first time in 2019, the NCAA Division III men’s wrestling championships is returning to the Berglund Center in 2023 with Ferrum College as the hosting school for the second time.

The NCAA awarded the bid to Roanoke and Ferrum Wednesday in announcing sites and host schools for numerous sports from 2022-23 to 2025-26 for men and women in Divisions I, II and III.

The tournament is scheduled to be contested over two days, Friday and Saturday, March 10-11.

Panthers head coach Ryan Riggs was an assistant when Ferrum entertained the 2019 tournament, marking the first time that it had been staged in Virginia.

“I am grateful for the opportunity for Ferrum College to host (the tournament) again in 2023,’’ Riggs said in a statement prepared by th school’s Sports Information Office. “I’m looking forward to working with the Berglund Center event staff and VBR Sports again, making it s quality experience for the competitors, coaches and fans.

“We have a lot of wrestlers from the Roanoke Valley and from Virginia who could be wrestling for national championships,’’ Riggs said.

Plans to bid on the tournament were initiated following the 2019 event. Riggs and Assistant Athletic Director Gary Holden played instrumental roles in spearheading the effort.

By the time the tournament returns, that number will have increased to at least seven with forthcoming additions at Roanoke College, Emory and Henry and Shenandoah University and the sport could be sponsored by the Old Dominion Athletic Conference (ODAC).

“All of us at Ferrum College are ecstatic to be chosen to host the (tournament). The staff at Ferrum did a remarkable job back in 2019 and it is a testament to the hard work that happened here that the NCAA has rewarded us with another opportunity to welcome wrestling back to the Roanoke Valley,’’ Director of Athletics John Sutyak said in the statement.

In 2019, Augsburg (Minnesota) University won the team championship, its 13th in program history, all since 1991 and four of its wrestlers claimed individual national championships.

Augsburg and Wartburg are Division III wrestling’s most decorated programs; they have combined to win 28 national championships and earn 20 runner-up showings.

A 2020 national champion was not crowned; the tournament was canceled because of the COVID-19 pandemic. All of the wrestlers who qualified received All-America laurels. Englman and Braden Homsey were among those honored.

The 2019 tournament competed against the Atlantic Coast Conference (ACC) tournament, which was staged at Virginia Tech in nearby Blacksburg.

“We’re very excited to host (the tournament) at the Berglund Center with Ferrum College again,’’ said Robyn Schon, the venue’s general manager. “…We look forward to welcoming participants and fans again in 2023.’’

Events in men’s and women’s basketball and baseball have been staged on Ferrum’s campus, while events in football and wrestling have been conducted at C.I. (Cy) Dillon Stadium-Fred M. Brown Memorial Field and Samuel M. Hawkins-Central Gymnasium at Franklin County High School in Rocky Mount.

Besides Roanoke, Ferrum hosted a baseball regional in Martinsville in 2004, but the title game was moved to Ferrum’s campus that year because of rain.

During that window, University of Mount Union (Ohio) played in the game 20 times.

The Purple Raiders won 13 national championships and was the runner-up seven times.

From 2009-2011, Summers coached on three Mount Union teams each of which lost in the Stagg Bowl to University of Wisconsin-Whitewater.

Bridgewater College is the only ODAC team to play in the Stagg Bowl since its inception in 1973.

Bridgewater coach Mike Clark was in charge of the Eagles and former Franklin County prep players Henry Eggleston and Kelly Moore were on the team. Eggleston started in the Stagg Bowl in the defensive backfield.

Mario Vasquez, competing for Ferrum College in the 2019 NCAA Division III wrestling national championships at the Berglund Center, prepares to slam his opponent during a bout in the 141-pound weight class. The tournament is returning to Roanoke in 2023 and for the second time, Ferrum is the host school.

A pair of competitors battle for a individual national champion on the final night of action in the 2019 NCAA Division III national wrestling tournament at the Berglund Center. In the finals, the mat is placed on an elevated platform.