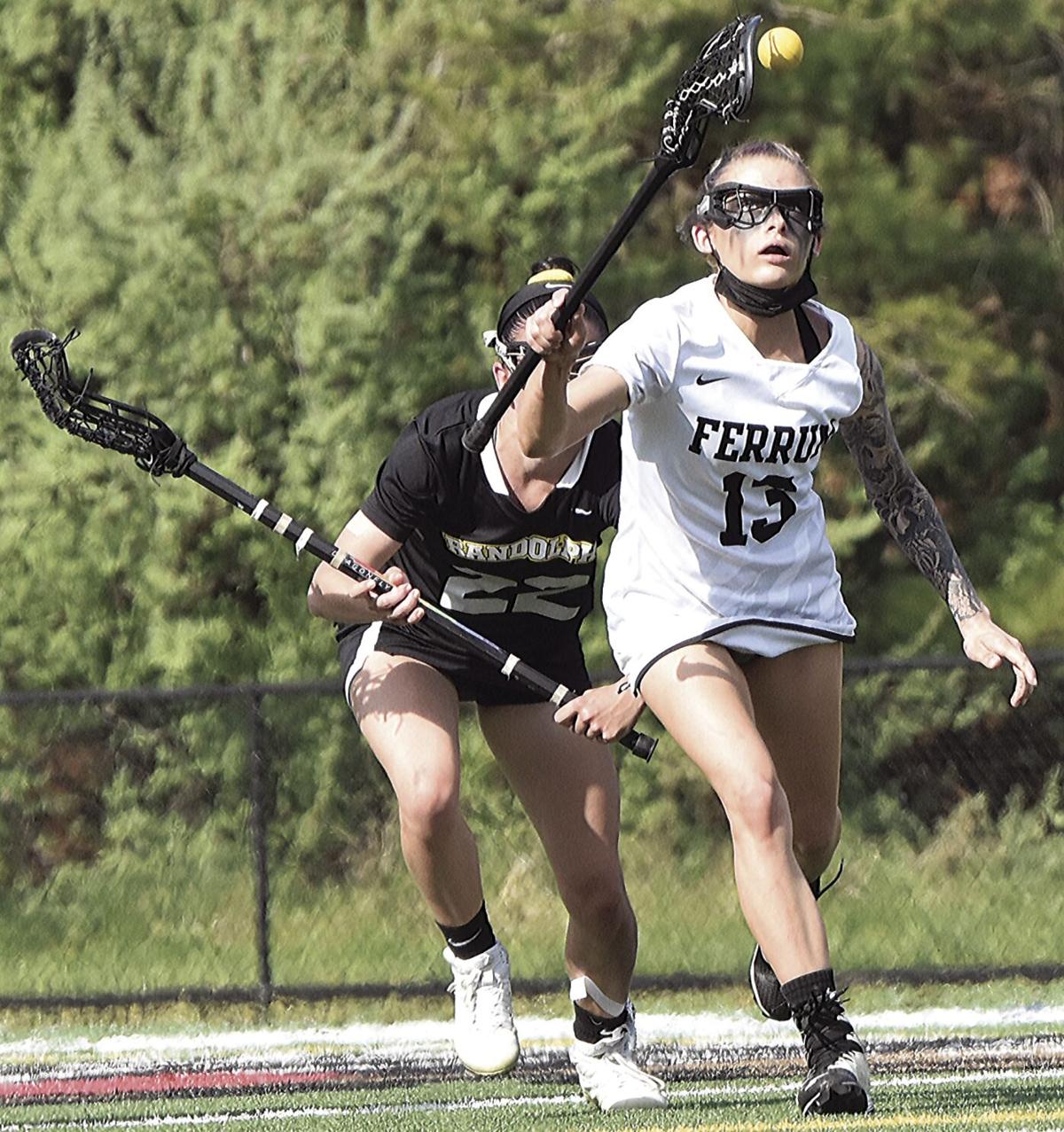 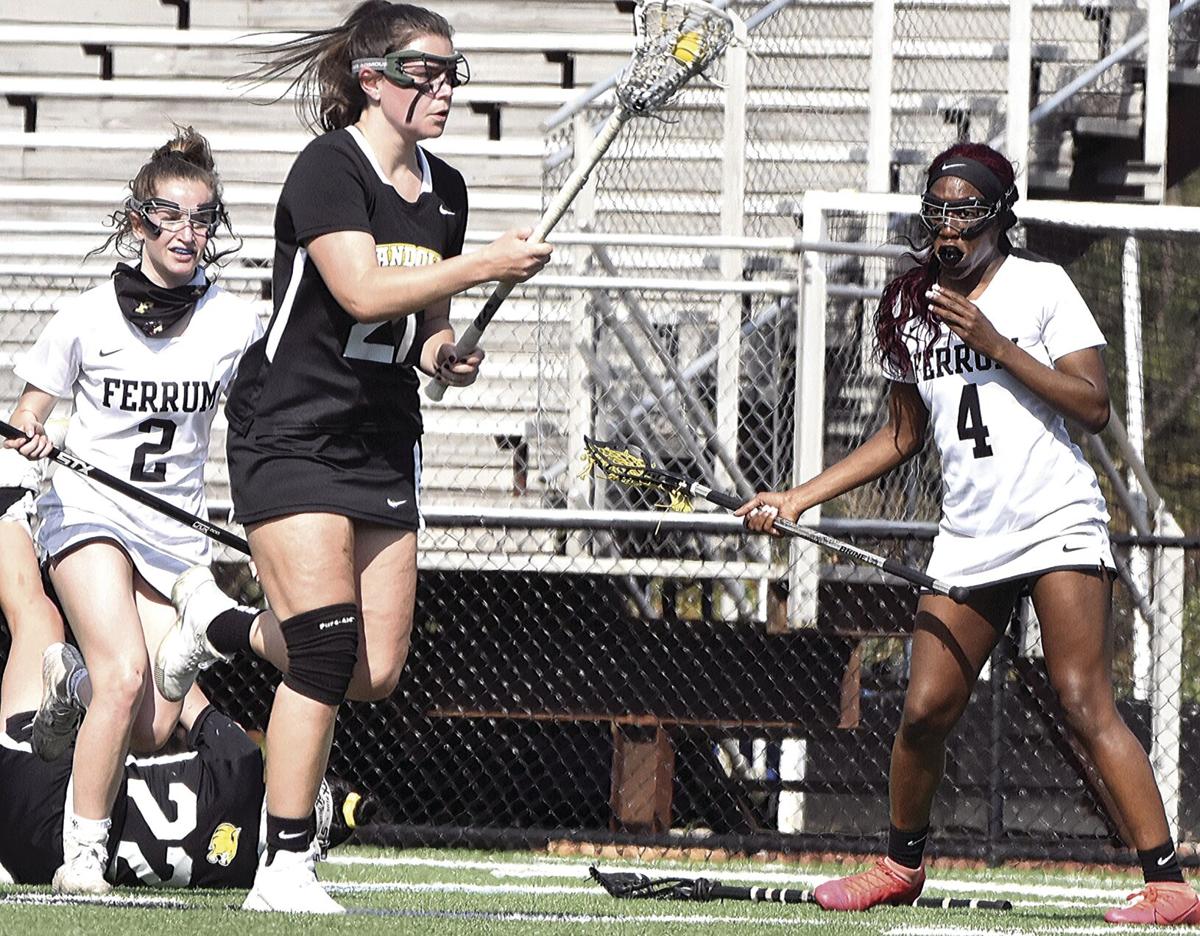 Randolph College senior Sarah Perry charges to the goal during the first half of play Wednesday. Perry, who scored twice in the match, ranks third in career scoring with 110 goals. She is a former Franklin County standout.

FERRUM—Ferrum College netted the match’s first 17 goals and held a 19-point lead at one point lead in the second half Wednesday in a 22-5 Old Dominion Athletic Conference (ODAC) women’s lacrosse rout of Randolph College at W.B. Adams Stadium.

The contest is the Panthers’ last home match of the season because a scheduled home match against league rival Guilford (N.C.) College set for Wednesday (April 14) has been canceled.

The Panthers’ lead was 20-1 before the Wildcats tallied four of the match’s last six goals.

Ferrum built a 6-0 advantage in the first 10 minutes of the match as Willow Cooper and Kaitlyn Harley each scored twice and Erin Reynolds and Megan Allen each scored once.

Later in the half, Cooper, Victoria Tyler and Briana Anderson each tallied two goals during a surge that produced the Panthers’ advantage at halftime and Harley and Micaela Harvey (Franklin County) each scored to open the second half.

Randolph’s Olivia Richards stymied Ferrum’s bid for shutout when she scored her team’s initial goal with 24:48 remaining off a free-position shot.

Bianca Cellitto and Natalie Hughes each scored twice for the Panthers during the match’s closing stages.

In all, 10 players scored for the Panthers: Cooper with five goals, Harley with four goals, Tyler, Anderson, Hughes, Allen and Cellitto each with two goals and Harvey, Reynolds and Reagan Aldridge each with one goal.

Ten of Ferrum’s goals were produced by an assist.

Hughes passed out three assists, while Aldridge, Harvey and Cellitto each distributed two assists and Harley had one assist.

Randolph senior Sarah Perry (Franklin County) scored twice in the second half on four shots, three of which were on goal. She won seven draw controls.

Perry ranks third in career goals for Randolph with 110.

Also scoring for Randolph were Alexis Bossi and Sophia Cirone each with one goal.

Each of Randolph’s goals was an unassisted tally.

Ferrum outshot Randolph, 26-8, claimed possession of 17 ground balls to five for Randolph, won 14 of the match’s 26 draw controls and was 7 of 8 in free-position shots as opposed to Randolph’s 4 of 7 clip.

Randolph committed 18 turnovers to seven for the Panthers.

Ferrum goalkeepers Harley Steger (3-2) and Amanda Thomas each logged 30 minutes of action and each registered a save.

Lynchburg led 17-2 at intermission and finished the rout with a 7-0 scoring surge after halftime.

Drew Fedorich netted both of the Panthers’ goals in the second stanza, both of which were unassisted tallies.

Fedorich’s first goal came with Ferrum in a man-up situation with 14:24 left in the frame; his second goal was tallied at 5:18.

The Hornets outshot the Panthers, 66-21, and claimed possession of 53 ground balls to 21 for the Panthers.

Ferrum was 1 of 3 in man-up scoring chances.

The Panthers committed 24 turnovers to nine for Lynchburg.

Ferrum’s loss is its fourth in a row and second straight to a nationally-ranked opponent.

Ferrum has surrendered 20 or more goals in three matches this season: 22 to Randolph-Macon College, 25 to Roanoke College and 24 to Lynchburg.

Ferrum has been outscored 81-23 during its four-match skid.

Hornets goalkeeper Patrick Moore (8-2) saw 15 minutes of action and collected one save. As a team, the Hornets registered 12 saves.

Ferrum’s next match is Saturday in Winchester against ODAC rival Shenandoah University. Match time is 1 p.m.

Despite finishing its first spring football regular season with consecutive setbacks, Franklin County has advanced to post-season play for the…

Randolph College senior Sarah Perry charges to the goal during the first half of play Wednesday. Perry, who scored twice in the match, ranks third in career scoring with 110 goals. She is a former Franklin County standout.