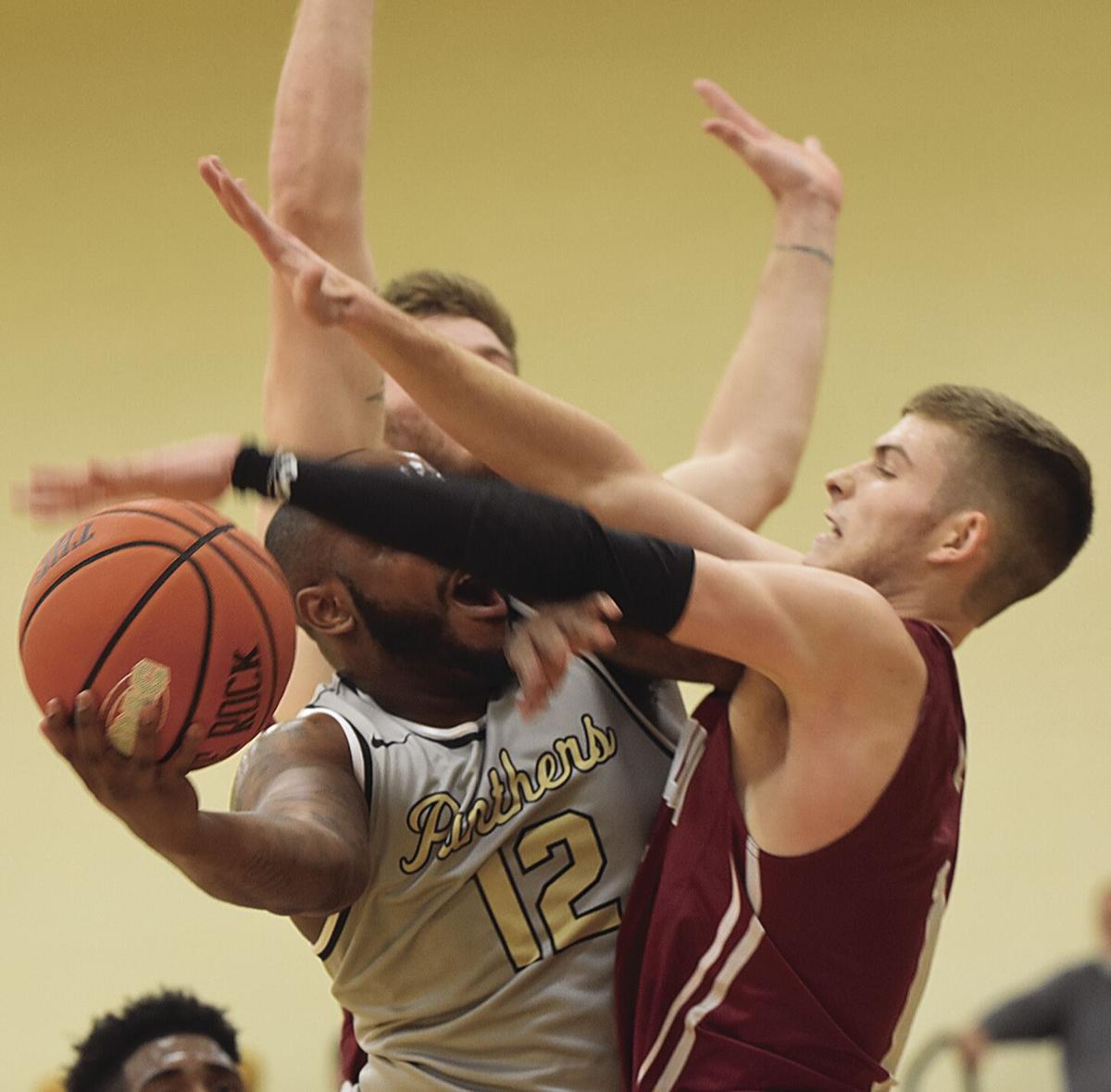 Nick Helton swishes a 3-point field goal for Ferrum College from the top of the arc during last season’s Old Dominion Athletic Conference (ODAC) victory over the University of Lynchburg.

RALEIGH, N.C.—Carrington Young’s tip in with 18 seconds remaining proved to be the game-winner Tuesday as Ferrum College’s men’s basketball rallied from a 12-point, second-half deficit for a 76-73 non-conference victory over William Peace (N.C.) University.

The contest was the season opener for both clubs which are former USA South Athletic Conference rivals.

Ferrum (1-0) is 2-2 in four season openers with head coach Tyler Sanborn at the helm.

“It was ugly, but we are excited to be able to start the season with a win,’’ Sanborn said. “With limited practice time and some new pieces in our rotation, I knew there would be some growing pains, which were evident.

“Fortunately, we found a way and I will never complain about a win. I am excited for our guys to experience some success.,’’ Sanborn said.

Trailing 72-70 after a 3-pointer by Ferrum senior Kajuan Madden-McAfee completed that run, Peace recaptured the lead when Tyler Parton swished a 3-pointer.

That set the stage for Young’s heroics, and senior teammate Nick Helton secured the win by making a pair of free throws with one second left.

Madden-McAfee’s trey provided Ferrum with its first lead of the second half.

Young, a red-shirt senior, grabbed 11 rebounds, six of which he corralled in the second half. The Panthers outrebounded the Pacers, 47-28.

Helton tallied 16 of his team-best 22 points after intermission. He hit four of his six 3-point field goals in the second half and was 4 of 4 from the free-throw line.

Madden-McAfee scored eight of his 14 points and pulled down eight of his nine rebounds over the game’s closing 20 minutes.

Darius Kemp totaled 12 points and eight rebounds in his first game for the Panthers. Kemp scored 10 of his points in the opening half on a 4 of 6 shooting display. He grabbed six rebounds and recorded two steals after halftime.

Ferrum led 5-0 at the outset, but Peace would rally and later secure advantages of 13-11 and 30-24. That six-point spread matched its largest lead of the half.

A Parton 3-pointer with 11 second left produced the Pacers’ one-point, 40-39, edge at halftime. It was Parton’s lone field goal of the first half.

John Burwell scored 14 points in the first half for Peace and he distributed three assists and collected four steals.

Burwell tallied 12 points in the second half to finish with a game-best 26. Also, he passed out a team-best four assists. Donolly Tyrell Jr. pulled down a team-best seven rebounds.

Ferrum overcame 20 turnovers which led to 24 points by the Pacers. The Panthers tallied five points off 11 Peace miscues.

Ferrum and Peace have played three times times as non-league opponents since the Panthers left the USA South for the Old Dominion Athletic Conference (ODAC).

The final game of the two-game, home-and-away set is Thursday at 5 p.m. at Swartz Gymnasium.

Had Franklin County’s Kalik Witcher been shooting free throws at a county fair Saturday, he’d have won every stuffed animal in the house.

Rice decides to 'slow down' at South Boston Speedway

SOUTH BOSTON - When Cathy Rice took the reins as general manager of South Boston Speedway in 2000, she became a pioneer in being only the seco…

More changes have been announced with regards to Franklin County’s winter sports schedules.

James River holds off Eagles jayvees at the end

An eighth-place finish in ODAC is predicted for Ferrum

Panthers are tabbed for a 10th-place finish in ODAC

Nick Helton swishes a 3-point field goal for Ferrum College from the top of the arc during last season’s Old Dominion Athletic Conference (ODAC) victory over the University of Lynchburg.