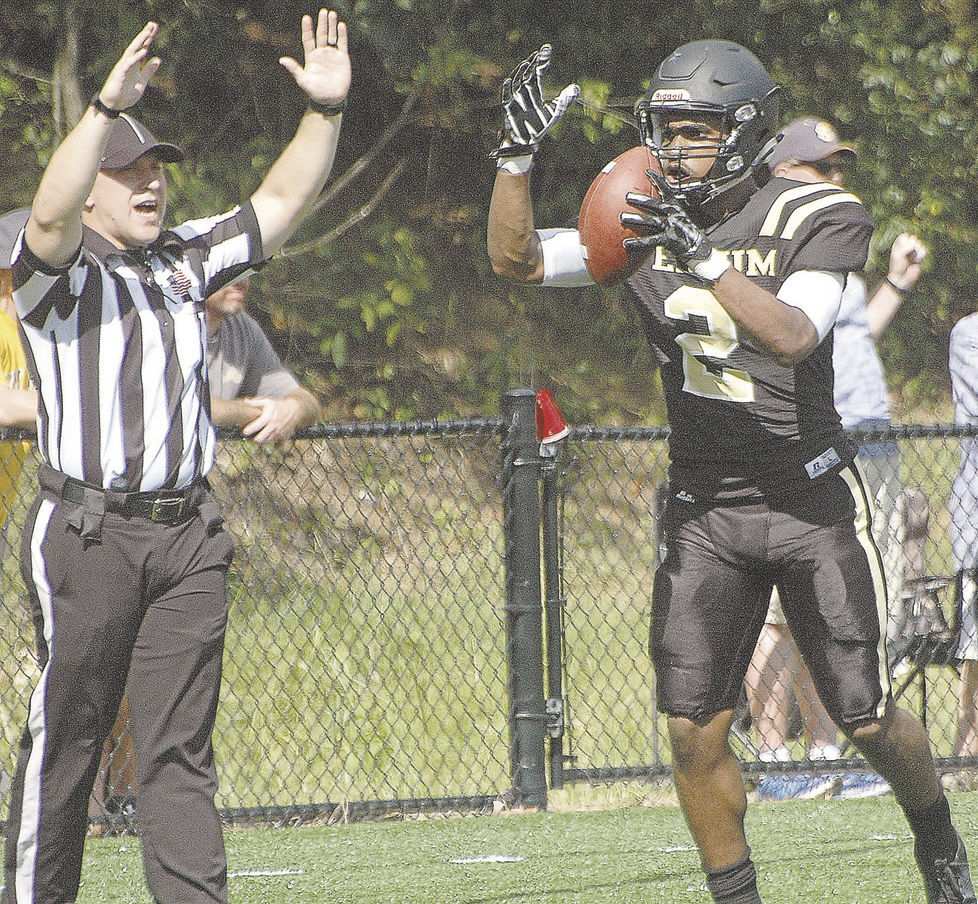 Johnny White (No. 2) scores the game-winning touchdown in a 39-38 victory over Emory & Henry College in the inaugural Crooked Road Classic. 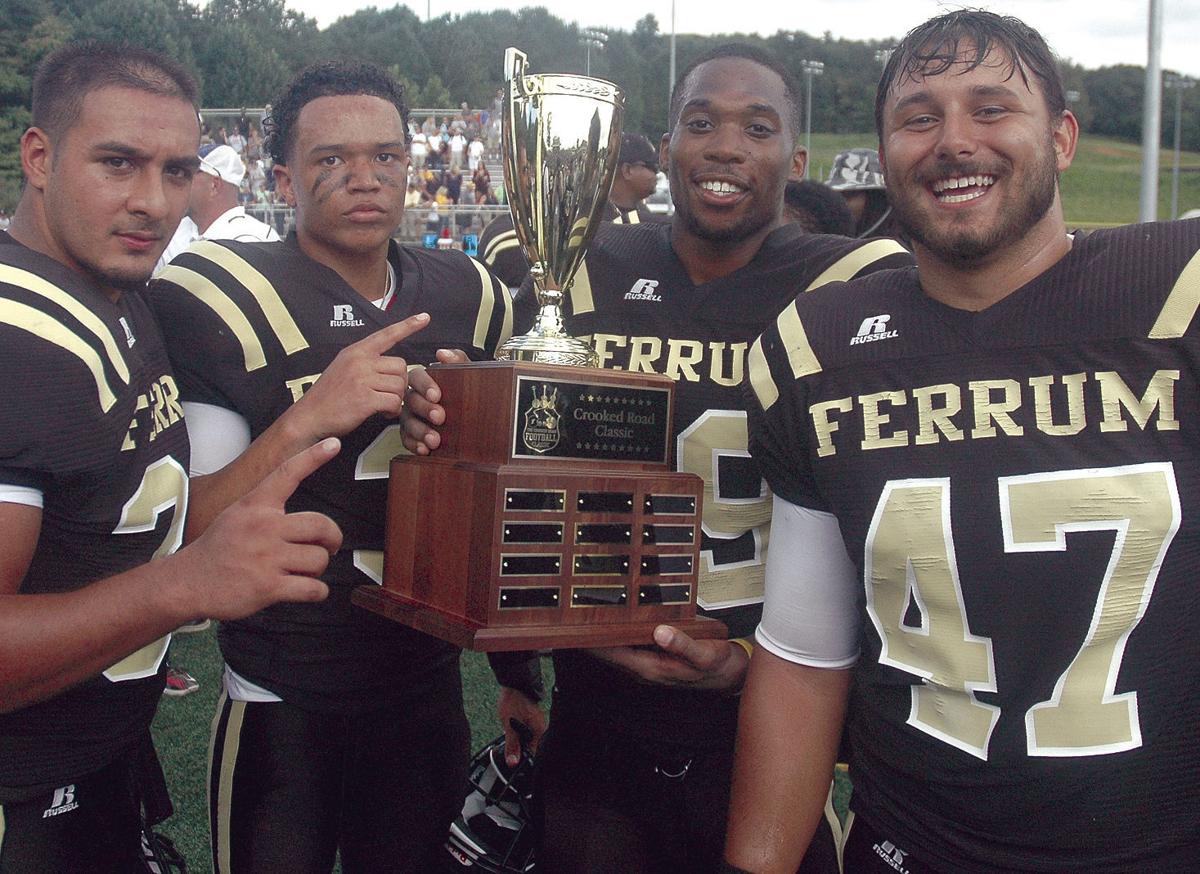 The Crooked Road Classic series stands at 2-2 after victories by Ferrum College in 2016 and 2017 and triumphs by Emory & Henry College in 2018 and 2019. In this photo, a quartet of Panthers pose with the traveling trophy following a 39-38 victory in the inaugural game at W.B. Adams Stadium. 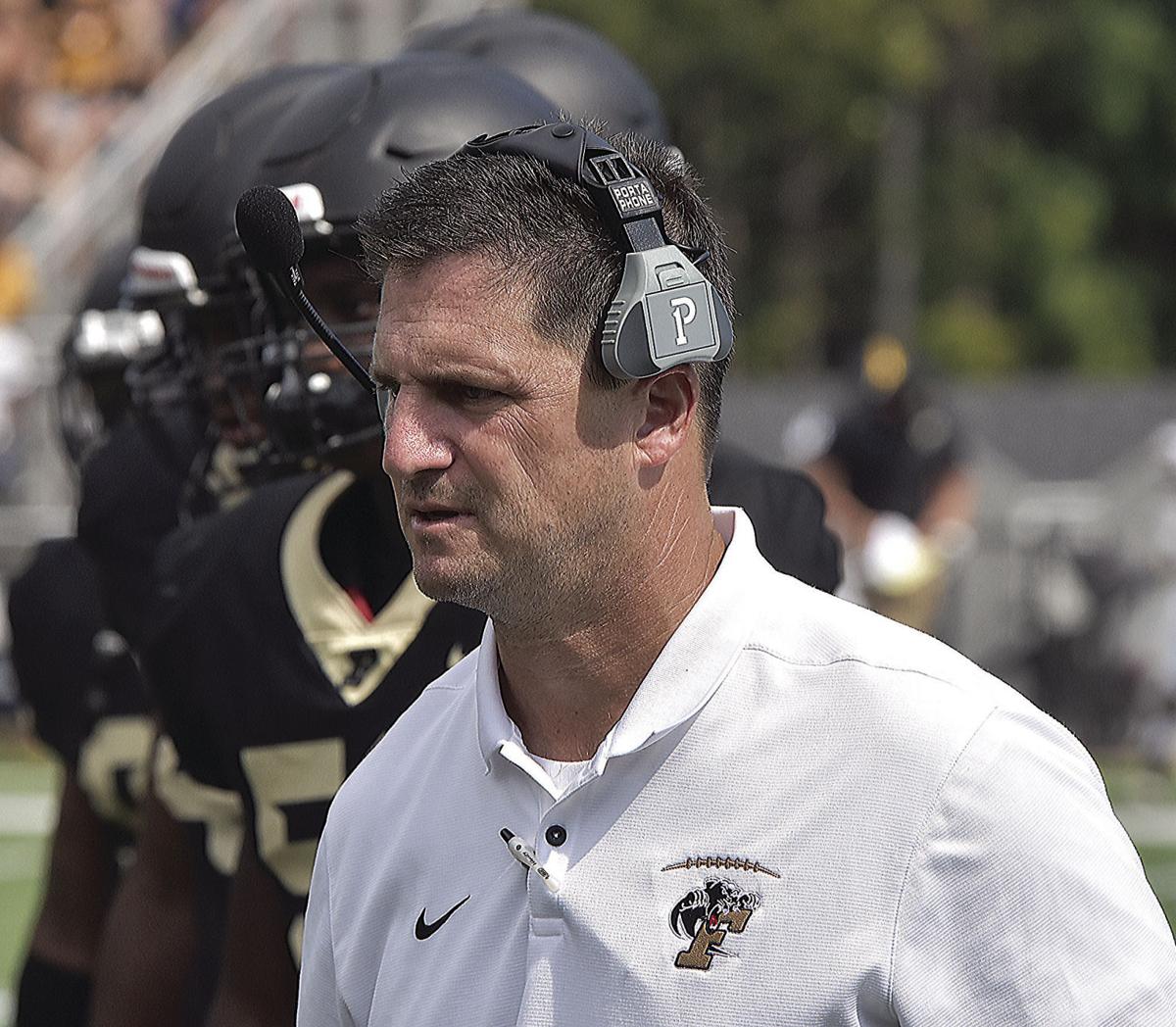 Rob Grande is the seventh of eight Ferrum College head football coaches in a program that began intercollegiate competition in 1955.

Editor’s Note: This story is taken from the Monday, Sept. 5, 2016 edition of The Franklin News-Post. It is an account of Rob Grande’s first win as Ferrum College’s head football coach, which came in his career head coaching debut. The 39-38 triumph at W.B. Adams Stadium came against Emory & Henry College where Grande served as defensive coordinator for 10 years (2005-2015). Grande left Ferrum this year to take an assistant coaching position at Iowa State, which is ranked No. 17 this week in the Associated Press’ top 25 college football poll.

FERRUM – In the inaugural Crooked Road Classic, first-year Ferrum College head football coach Rob Grande helped get the Panthers off the beaten path and back on the straight and narrow.

The Panthers did this by edging long-time gridiron rival Emory & Henry College, 39-38, with two fourth-quarter rallies Saturday at W.B. Adams Stadium in the 2016 season opener for both clubs.

Ferrum’s triumph is Grande’s first as a head coach and it comes against a team with which he was very familiar: he served as an assistant coach from 2005-2015 at E&H.

The Panthers’ victory is their first on-field win over the Wasps since 2005 – there were two forfeits by E&H during a nine-game series losing skid that ended Saturday, but Ferrum opted not to accept those forfeits.

Ferrum’s win is its first in a season opener since 2005 and its first at Adams Stadium since 2013.

Grande and former head coach Lewis Lane, who was Ferrum’s sideline boss for one campaign (1959), are the program’s only head coaches to win their first games at the helm.

“The first win – it’s unbelievable, you’ll never forget it,’’ Grande said. “...This game had a little more meaning because of where I came from. It was emotional for me because there are a lot of great people (on the E&H) sideline who were real good to my family.’’

“To complete the turnaround and win is very special,’’ Grande said.

“This is the game that everyone talks about because (E&H) is right down the road. There is always a big crowd,’’ said Ferrum senior quarterback Harvey Taylor, who completed 16 of 28 passes for 227 yards and three TDs.

“All week, we’ve been hearing about the game all over campus, and we’ve had a share of doubters. We wanted to silence them and show them that we could compete with these teams,’’ Taylor said.

Ferrum debuted an offense that featured multiple looks and had more balance between the run and the pass. Of its 73 plays, 45 were rushes and 28 were passes. The Panthers generated 401 offensive yards.

“I think our offense looked good, but there is always room for improvement. The offense is similar to what I ran in high school (at Group 3A Magna Vista). I love this offense,’’ Taylor said.

The Panthers (1-0) responded to the 16-point deficit with two touchdown dashes by freshman Brian Mann, the first covering 13 yards, the second covering 3 yards.

The Panthers made 2-point conversions after each TD. Mann’s rush for the second 2-pointer produced a 31-31 stalemate with 1:17 to go.

It didn’t take E&H (0-1) long to break the deadlock as Kendrick Kube returned the ensuring kickoff 97 yards for a TD.

Trailing 38-31 with 55 seconds left, Taylor, who was making his fourth career start for the Panthers behind center, engineered a 68-yard drive that erased 48 seconds from the clock.

Receiver-running back Johnny White made three of his game-best 10 receptions during the march. The last of those catches was an 18-yard TD hook-up between he and Taylor.

“Words can’t explain it. It felt like the ball was floating. I couldn’t do anything but catch it,’’ White said of his game-deciding reception. “...We had to get in the end zone. We did exactly what we needed to do.’’

“Johnny likes to go up and get the ball. He’s proven that to me during the whole (preseason) camp. I believe in all of my receivers,’’ Taylor said.

“He made a great catch at the end while I was getting hit,’’ Taylor said.

An unsportsmanlike conduct penalty was called on the Wasps on the play and it was assessed just before the 2-point try. With the ball resting at the 2 yard line, Taylor found the end zone for the game-winning points.

“Their end had been crashing heavy. (The coaches) told me if he crashes, pull the ball in and get up the field,’’ Taylor said. “That’s what happened.’’

There were seven seconds showing when Ferrum took its first and only lead. Its special teams protected the edge when E&H returnman Raashaun Noaks was tackled after a 12-yard return.

And Mann, a freshman who prepped at Giles County, carried 28 times for 167 yards and two scores in his college debut.

“The holes were crazy. Anyone could have run through them,’’ Mann said. “All the credit goes to the offensive line. “(The win) is something that I’ll never forget. It was my college debut. It was amazing.’’

The game turned in Ferrum’s favor oddly enough after Taylor was sacked for a 21-yard loss in the fourth quarter. That forced punter Tyler Morgan to punt from Ferrum’s 15 yard line and E&H’s returnman Jesse Santiago brought the ball back to the 2.

But, E&H was called for a pre-return hold. The penalty cost the Wasps 10 yards which was not enough to give the Panthers a first down, but it drew the ire of third-year E&H head coach Curt Newsome who was assessed an unsportsmanlike conduct penalty.

The 15-yard flag gave Ferrum a first down at its 40. Four plays later, Mann dashed 13 yards to the end zone and Taylor completed a 2-point conversion pass to Josh Bare to make the count 31-23 at the nine-minute mark.

“I got flagged for making a statement about an official on the other side of the field,’’ Newsome said. “...I hate it for our kids. I did this to them. I should have used better judgement I guess...I’m not used to that call for making the statement I made. I should have kept my mouth shut.

“I cost us the game. Sixteen-point lead and they are punting to us. The game is over,’’ Newsome said.

E&H gained 143 yards on the ground, but the Wasps committed two fumbles: one by Saxton, the other by running back Isaiah Rodgers.

Johnny White (No. 2) scores the game-winning touchdown in a 39-38 victory over Emory & Henry College in the inaugural Crooked Road Classic.

The Crooked Road Classic series stands at 2-2 after victories by Ferrum College in 2016 and 2017 and triumphs by Emory & Henry College in 2018 and 2019. In this photo, a quartet of Panthers pose with the traveling trophy following a 39-38 victory in the inaugural game at W.B. Adams Stadium.

Rob Grande is the seventh of eight Ferrum College head football coaches in a program that began intercollegiate competition in 1955.