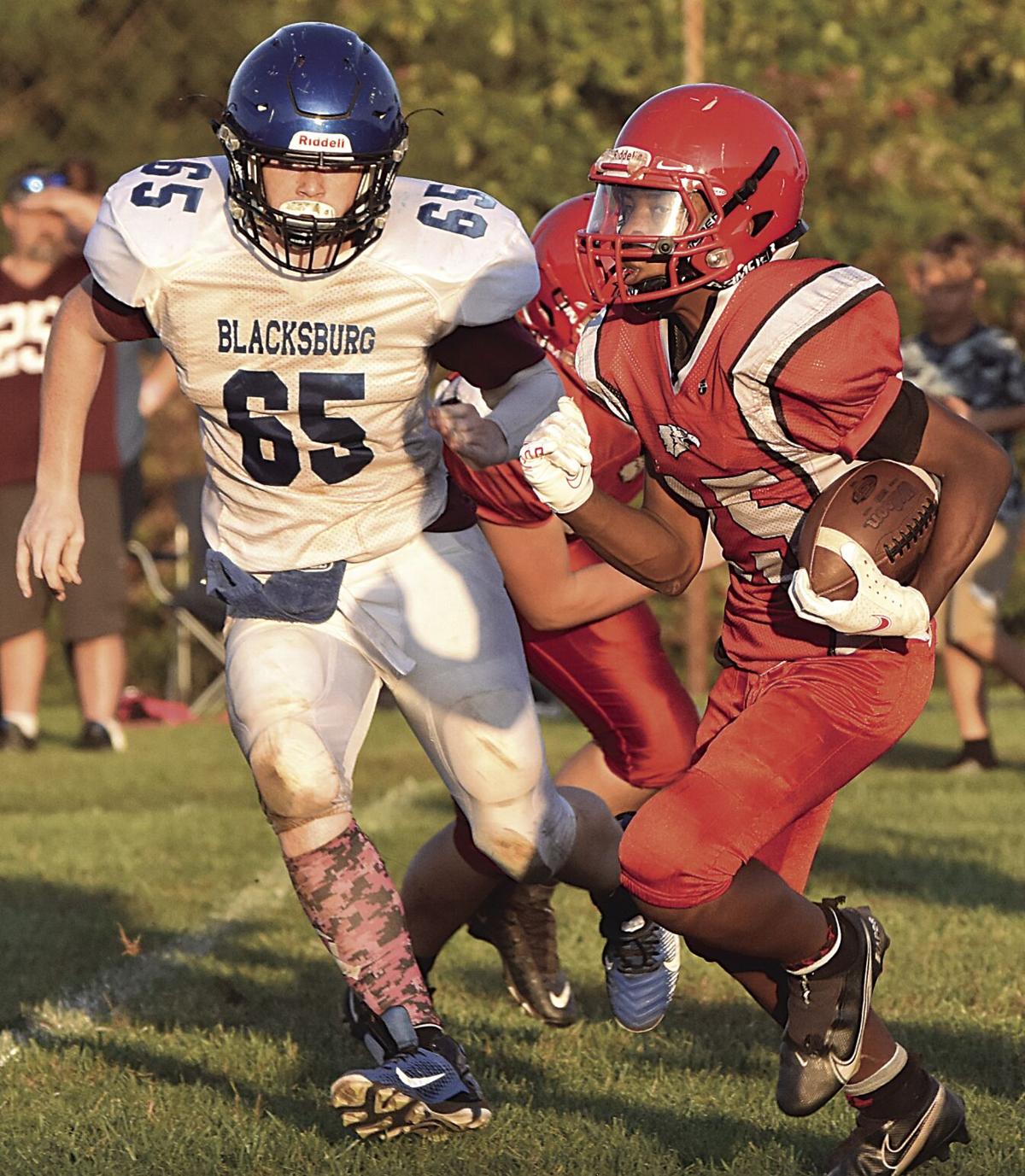 Rashaun Hughey avoids a Blacksburg Middle School as he rushes for a significant gain of yardage in Benjamin Franklin Middle School's  46-0 victory over the Bruins in its season finale last week at home. 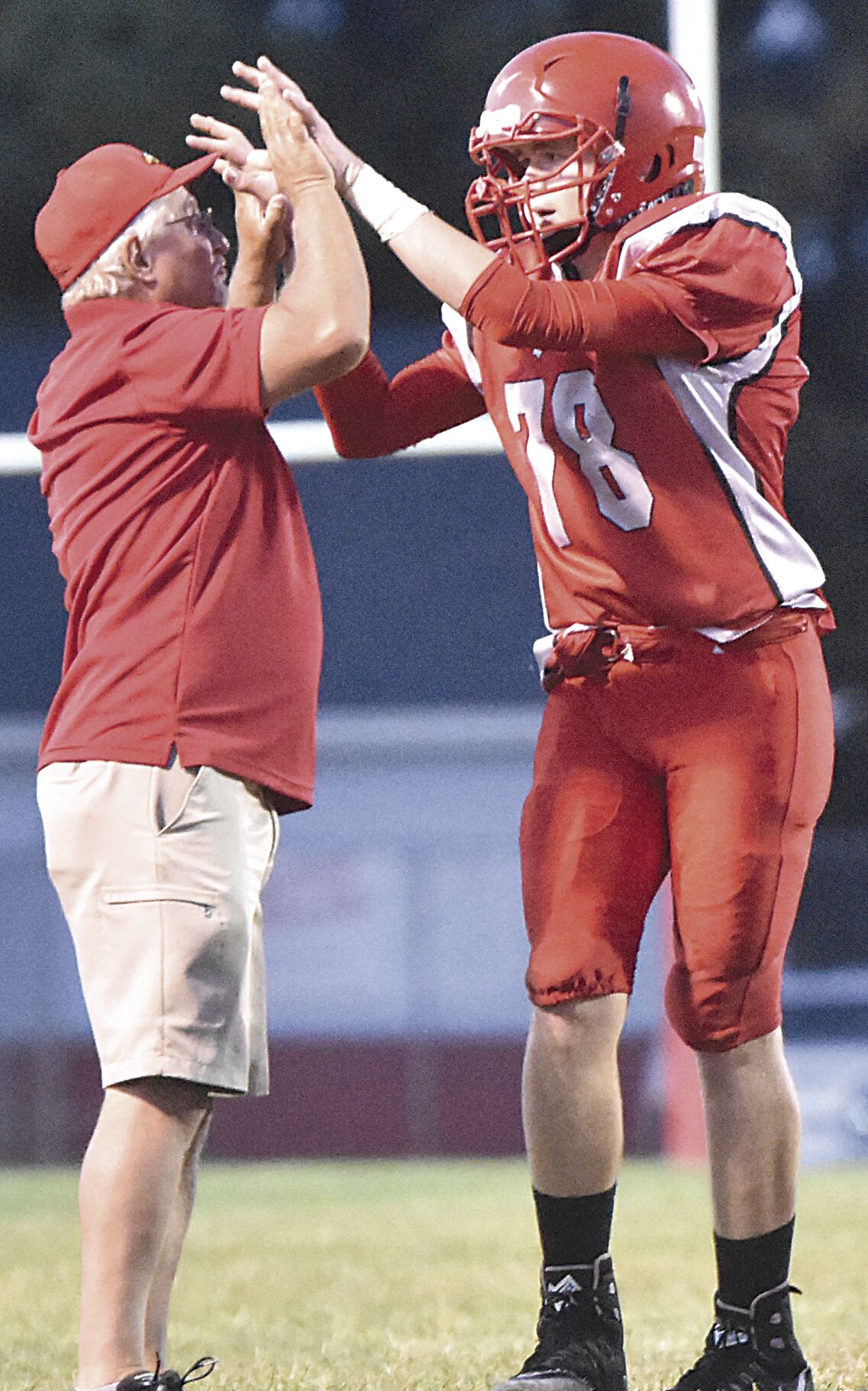 It defines the number of points tallied by Blacksburg Middle School.

It’s present in the loss column of the Eagles’ record.

BFMS (8-0), the reigning Roanoke Valley Middle District champion, scored all but eight of its points in the first half and completed a perfect campaign Thursday with a 46-0 rout of the Bruins at home.

Counting its abbreviated spring season, BFMS is 12-1 during the calendar year - that lone loss was avenged during the fall.

“With everything on the line, I told the guys, ‘You leave it all on the field.’ Our saying is ‘Be the hammer and not the anvil,’’’ Eagles head coach Chris Renick said.

“The guys came out and laid the hammer and put everything they had worked for the past two years. They gave it all they had and came out on top.’’

The Eagles claimed a lead they would not surrender on their first drive of the game, a march that started on the 30-yard line.

Rashaun Hughey rushed for 50 yards on two carries - 25 yard on each rush - and quarterback Ja’ziel Hart hit receiver Antonio Mack with a 15-yard pass to move the ball deep into the red (scoring) zone.

Hughey finished the drive with a five-yard touchdown run and after a 2-point comnversion, the count was 8-0.

BFMS increased its lead to 16-0 after Hart intercepted a Bruins’ pass and returned it to the end zone for a TD, followed by a second 2-point conversion.

Next, Jacob Mullins recovered an onside kick to give the Eagles possession on Blacksburg’s 45.

A pair of 20-yard gains by Colton McGuire and Hughey moved the ball to the 5, then Hughey finished the march with a scoring dash. After BFMS’s third 2-point conversion, the spread was. 24-0.

Hughey opened the series with a 40-yard run, a sprint that set up a 15-yard scoring dash by Hart.

“(Rashaun) ran the ball well and hard all night for us,’’ Renick said.

Following a three plays and out defensive series, the Eagles’ offense took the ball on its 20. A 20-yard run by Hughey and a 60-yard scoring dash by Hart resulted another TD, followed by 2-point conversion made the score 38-0.

The Eagles finished the first half by gaining one more possession after Mullins intercepted a pass and returned it 35 yards with 37 seconds left, but they opted to end the hsl;f with the significant advantage.

BFMS started the second half by forcing a three-and-out.

The offense took the ball on its 40 and Hughey ran 60 yards for the game’s final score.

Later in the half, the defense forced a three-and-out. On offense, Isaiah Carter had runs of 20 and 10 yards and Hayes rushed for 10.

Then, the Eagles took a time out that allowed their starters to exit the field.

The B-team finished the game.

Hughey (offense) and Mullins (defense) earned Player of the Game honors as selected by the coaching staff.

Franklin County junior running back Jahylen Lee, who rushed for a single-season, program-best 1,986 yards, has been named Most Valuable Offens…

Eagles build lead, hold Comets at bay at the end

Franklin County built a double-digit advantage in the second half, then withstood a rally by Halifax County in the final frame Wednesday for a…

Josh Boyd of Ferrum poses with his son, Joshua Boyd Jr., and the 8-point buck he recently harvested.

Eagles' campaigns tip off with match-ups against Comets

State Hall of Fame opens its doors to Warren

Rashaun Hughey avoids a Blacksburg Middle School as he rushes for a significant gain of yardage in Benjamin Franklin Middle School's  46-0 victory over the Bruins in its season finale last week at home.