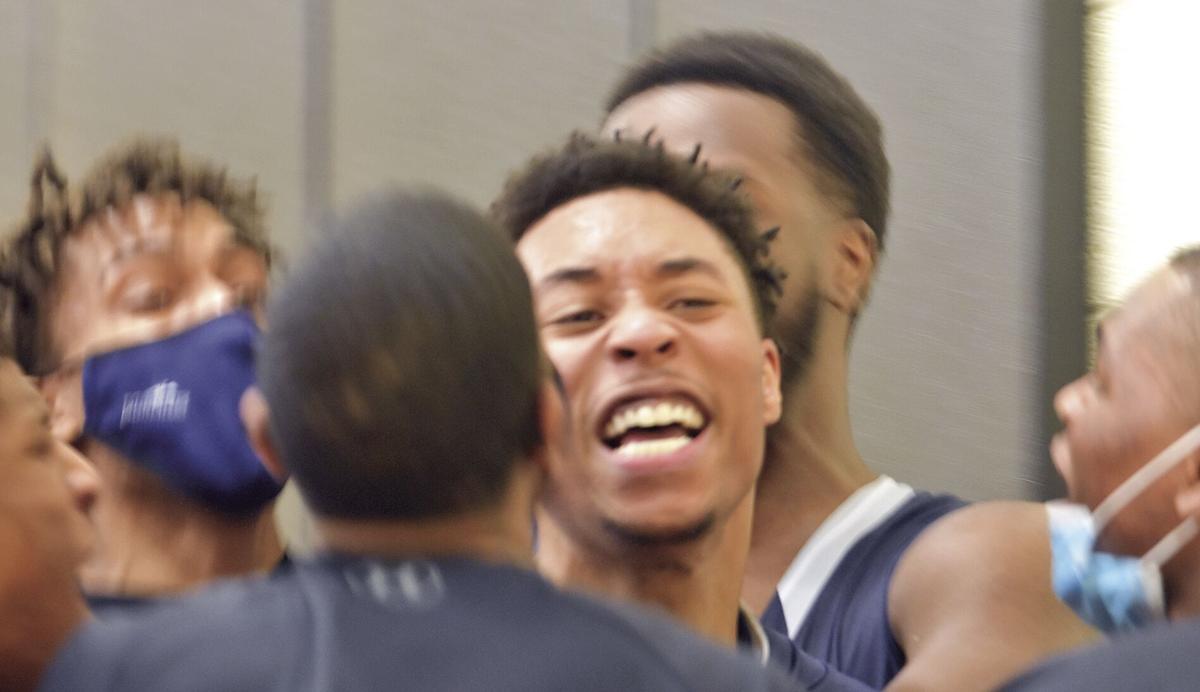 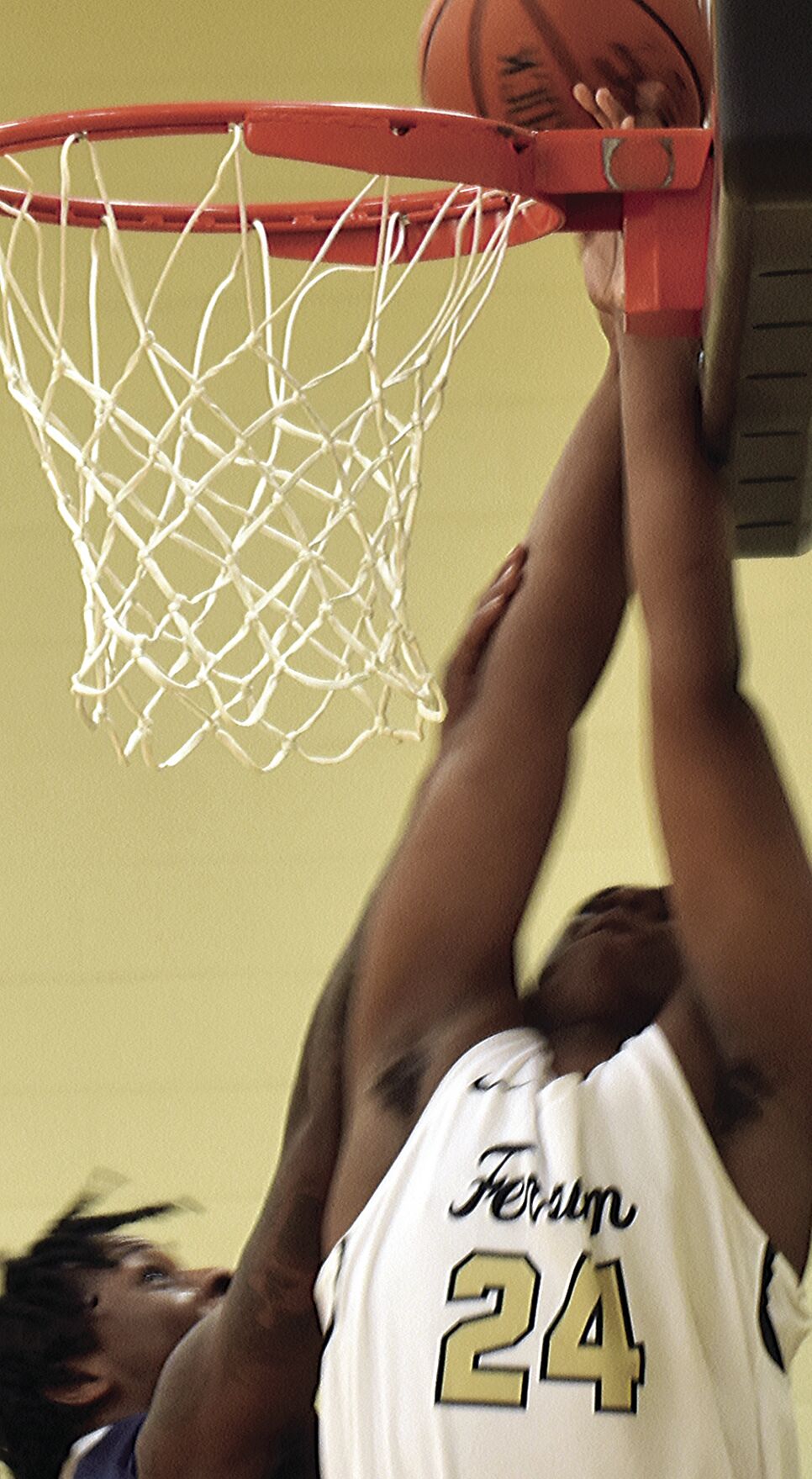 Ferrum College's Michael Spraggins (No. 24) is fouled as he tries to score inside on the last play of the first half of Sunday's 84-83 Panthers' loss to Old Dominion Athletic Conference (ODAC) rival Virginia Wesleyan University at William P. Swartz Gymnasium. 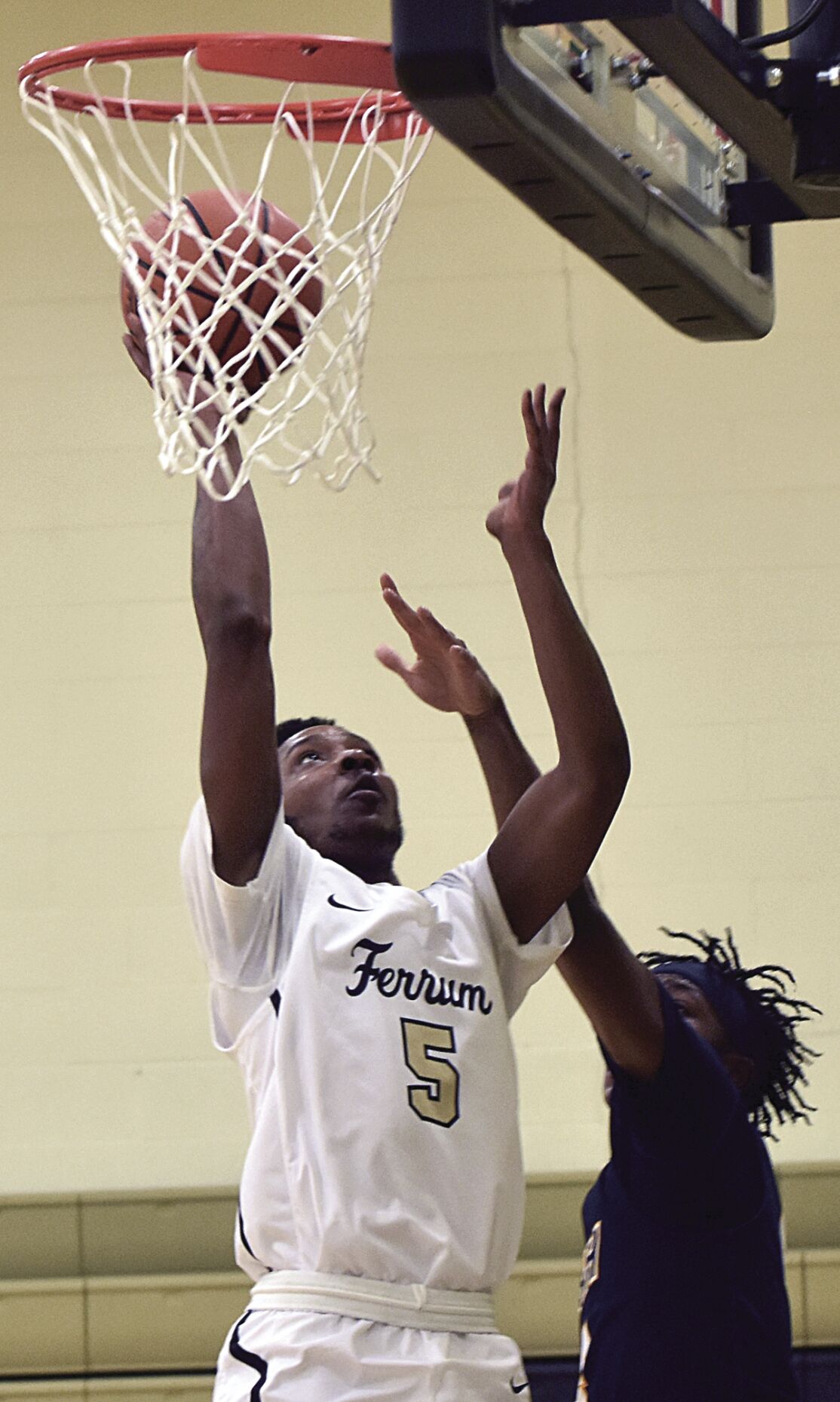 Ferrum College's Jamar Butler (No. 5) drives by an Emory & Henry College defender during the first half of the Panthers' 81-78 Old Dominion Athletic Conference (ODAC) victory over the Wasps Friday at William P. Swartz Gymnasium.

FERRUM—The only thing Jordan White failed to do on his last shot Sunday was call backboard.

Once White’s 3-pointer was acknowledged, Virginia Wesleyan’s players and bench personnel rushed the court and mobbed him at the far right corner of the court in front of working media.

Ferrum (6-5, 5-4 in the ODAC) suffered its third defeat at home this season and its second, one-point loss of the campaign, both in conference play.

“It was a tough ending to the game, but I am proud of the way we battled. I thought we really struggled defensively in the second half; their guys were getting too many easy looks, and we let them get some confidence,’’ Panthers bench boss Tyler Sanborn said.

“We made big plays down the stretch and that was great to see, we just could not quite close it out.

The game featured 11 lead changes and seven of those were in the closing 2:50.

The count was tied six times, the last of which came with 11 seconds showing after two successful free throws by the Marlins produced a stalemate at 80.

But the Marlins, who outscored the Panthers, 53-45, were ahead at the end thanks to White’s heroics from the perimeter.

The Panthers led 38-31 at intermission; the Marlins opened the second half with a 9-0 surge to erase that deficit.

Tim Fisher paced the Marlins with 19 points, a game-best 13 rebounds and a team-best four assists.

James Smith Jr. came off the bench to tally a game-best 22 points for the Panthers and Madden-McAfee totaled 21 points, eight rebounds and four assists.

The game is the Panthers’ regular-season finale as a previous scheduled league road contest Thursday against Guilford (N.C.) College has been canceled.

Now, the Panthers are off until post-season tournament play commences next week. Their opponent is set to be revealed Monday afternoon, conference officials said when they announced that the field would be increased from four teams.

Usually, 10 teams advance to the tournament; however, because of COVID-19, the post-season tournament had been reduced to four.

League teams are scheduled to be tested Monday morning to see if they will be available for competition, Ferrum Director of Athletics John Sutyak said prior to Sunday’s contest.

TIP-INS: The Panthers defeated Emory & Henry College for the third straight time at Swartz Gym in the last two seasons , 81-78, in a conference match-up.

The Wasps closed the deficit to one point, 78-77, with 6.8 seconds showing after a 3-pointer by Patrick Antonelli, who finished with a team-best 21 points.

Emory & Henry played all nine players that it dressed for the game and eight scored.

Madden-McAfee totaled a game-best 21 points, while Young and Jamar Butler each scored 14.

Seven other players contributed points to the victory.

Darius Kemp pulled down a game-best 11 rebounds for the Panthers.

Emory & henry led by two points, 45-43, at intermission, but Ferrum erased that deficit when Madden-McAfee swished a 3-pointer to open the second half. The Panthers maintained a lead the rest of the way.

Franklin County’s first spring football game in program history has been moved up a day.

Franklin County senior tailback Jayron Smith (No. 10), who rushed for a game-best 102 yards, tries to break free from the pursuit of multiple …

FERRUM -During the next Rocky Mount Town Council meeting on March 8, council members will either be decked out in black and gold or blue and gold.

SONTAG—The deadline for spring sports registration with the Franklin County Department of Parks and Recreation is Monday, March 1.

Ferrum College's Michael Spraggins (No. 24) is fouled as he tries to score inside on the last play of the first half of Sunday's 84-83 Panthers' loss to Old Dominion Athletic Conference (ODAC) rival Virginia Wesleyan University at William P. Swartz Gymnasium.

Ferrum College's Jamar Butler (No. 5) drives by an Emory & Henry College defender during the first half of the Panthers' 81-78 Old Dominion Athletic Conference (ODAC) victory over the Wasps Friday at William P. Swartz Gymnasium.