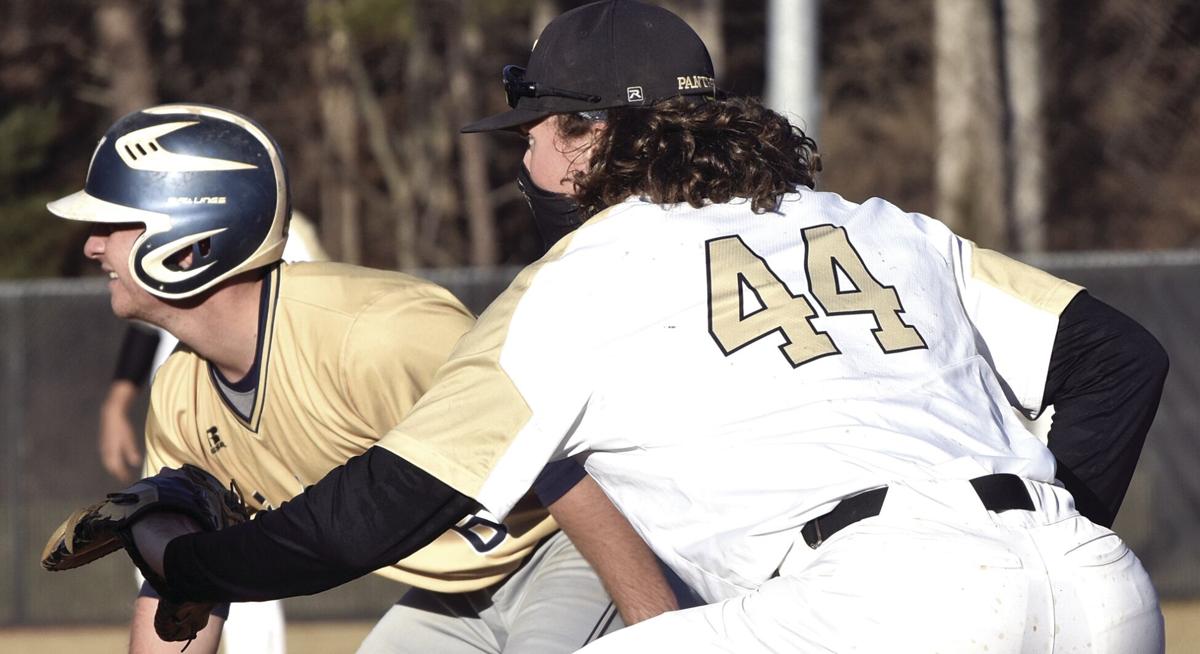 Ferrum College first baseman Matt Yarborough defends the bag as a North Carolina Wesleyan College players takes his lead off base during Tuesday's match-up between the Panthers and the Bishops, won by N.C. Wesleyan, 10-8, at W.B. Adams Field. Yarborough has been selected Old Dominion Athletic Conference Player of the Week in baseball. 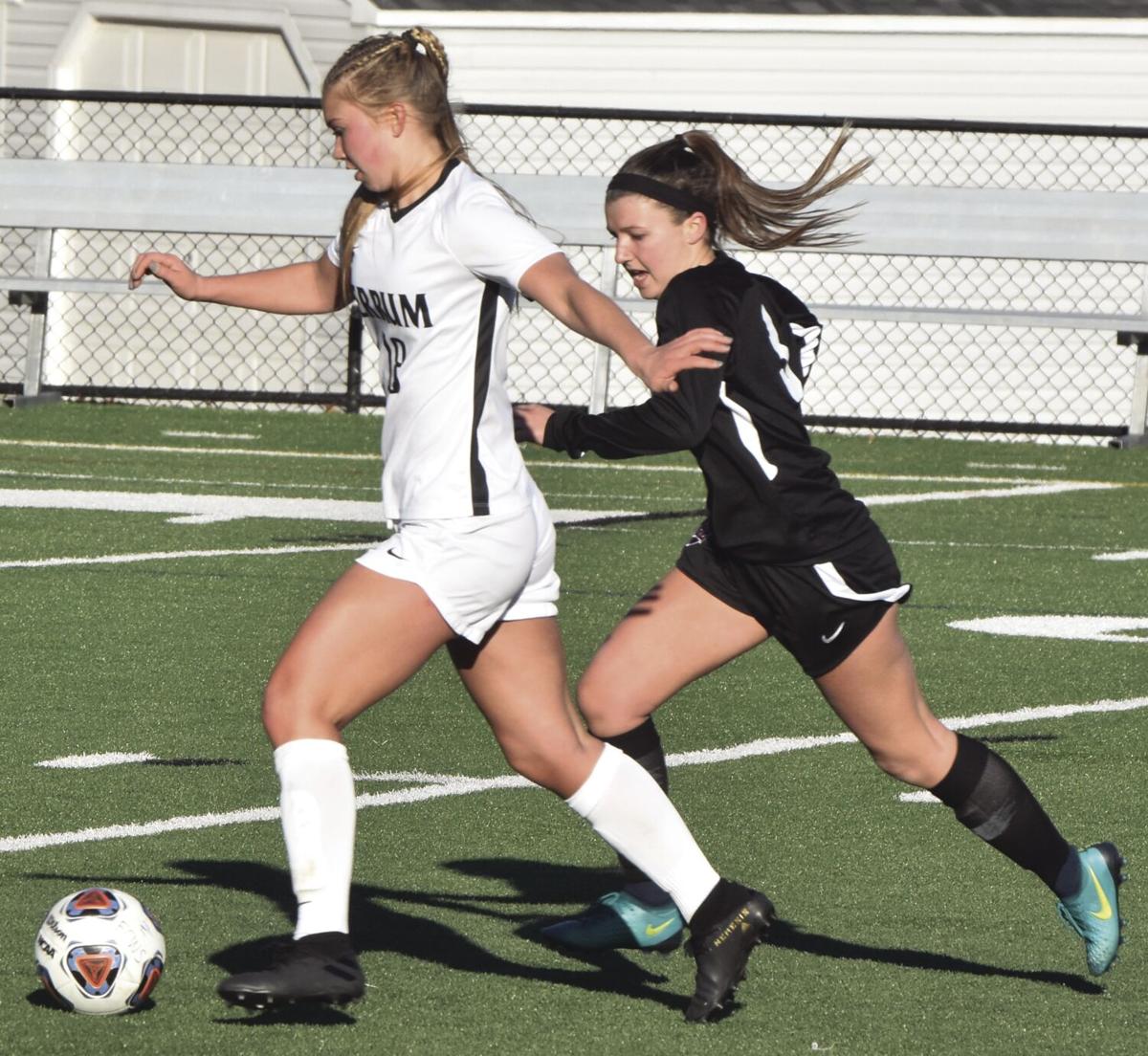 Ferrum College's Brady Hentz (front) sprints past a Roanoke rival and she advances the ball to midfield for the Panthers.

FOREST—Ferrum College senior first baseman Matt Yarborough has been selected Player of the Week in baseball in the Old Dominion Athletic Conference for his performance Sunday in the Panthers’ season-opening, 6-5 road win over non-conference rival North Carolina Wesleyan College.

Yarborough belted a home run and a triple in five visits to the plate and drove in five of Ferrum’s six runs; two each on the triple, the first of his career, and the home run, the second of his career.

With the win, the Panthers enhanced their current winning streak to three games.

Yarborough, who prepped at Class 3 power Tunstall, is a senior who hails from Danville. He is in his third season with the Panthers.

Ferrum continues its season this weekend with a three-game homestand against Spalding (Ky.) University.

A Saturday doubleheader with games set for 1 p.m. and 4 p.m. begins the series. The set concludes Sunday with a single game slated for a noon start.

Roanoke College is the host school for the four-team tournament.

Joining Ferrum and Roanoke in the field are Southern Virginia University and Emory & Henry College.

The tournament had been scheduled for Monday, but was postponed due to weather and reset for today.

Panthers, Maroons play to a 1-1 stalemate

Both goals were netted in the second half.

Ferrum was playing its first match in more than a year (472 days) because of the COVID-19 pandemic forced the postponement of its traditional fall campaign with an abbreviated spring season as its replacement.

Neither team scored in the two, 10-minute periods of sudden-victory, post-regulation play.

The Maroons (0-0-1, 0-0-1 ODAC) did find the back of the net in the 108th-minute, but their match-winning goal was voided by an offsides violation, the only such infraction of the contest.

“I am so incredibly proud of the way we fought to come back after being 1-0 down. It wasn’t pretty, but we never stopped working,’’ second-year Panthers head coach Erin Saleeby said.

“There is a lot of heart in this team.’’

The Panthers committed two fouls to the Maroons’ one.

Ferrum’s next match is Sunday in Lexington against Washington and Lee University at 1 p.m.

The Generals bested the Panthers twice last season with that second triumph coming in the quarterfinals of the ODAC’s post-season tournament.

Ferrum finished fifth in the team standings with 46.5 points.

Pendergrass and Benjamin each lost her first bout before rallying to earn her national- qualifying berth.

“We took five wrestlers to regionals and we got four qualified through to nationals,’’ second-year Panthers head coach Breonnah Neal said. “Destiny went from losing her first-round match to coming back to get fourth. That shows grit and determination. I’m proud she could battle back and was able to make it to nationals.

“I’m looking forward to getting back to work to prepare for nationals…,’’ Neal said.

The national tournament is Saturday, March 6 at Tiffin (Ohio) University.

The Panthers (0-2) opened their 2021 season with the pair of setbacks to the Falcons (4-2), a former USA South Athletic Conference rival.

In the first game, Pfeiffer rallied from deficits of 2-1 and 4-3 by rallying for four runs in the last of the sixth.

The Falcons scored single runs in the first, second and fourth frames.

Former Franklin County prep standout Sara Brown, a senior, was 0 of 3, but reached base twice.

For Ferrum, Arielle Eure collected three hits, including a home run, and drove in two runs.

Also with hits were Keri Hamlett, Bayley Cunningham, Emily Cook, Breanna Weaver (Franklin County) and Carly Nelson each with one.

Cunningham drove in two runs and Hamlett stole a base.

Erin Nelson (0-1) was charged with the loss. She struck out two, walked one and permitted seven runs, three of which were earned.

Nelson faced 33 batters in her complete-game effort. She threw 105 pitches, 69 for strikes.

In the second game, Pfeiffer overcame a 1-0 deficit by scoring three runs in the third and four in the fifth.

The Falcons outhit the Panthers, 11-4, and played error-free defense, while the Panthers committed the game’s lone blunder. Three of those hits were for extra bases: all doubles.

Addison York collected three hits, while Walter and Mickles each totaled two and Pennell, Mattie Hinson and Paige Love each had one.

Pfeiffer stole two bases and was caught once.

Eure and Tori Scott each stroked a double for the Panthers and Scott drove in their lone run. Also with hits were Weaver and Caitlyn Wiles.

Eure stole a base.

Mickles (1-1) worked all seven innings inside the pitching circle and permitted four hits, no walks and a run, which was earned. She struck out two.

Mickles faced 25 batters. She threw 75 pitches, 52 of which were strikes.

Skyler Swaney (0-1) tossed six innings for Ferrum and surrendered 11 hits, three walks and seven runs, all earned, while striking out two. She hit one batter.

Swaney faced 32 batters and threw 123 pitches, 76 of which were strikes.

Erin Reynolds tallied all four of her goals during the Panthers’ opening, eight-goal surge, while Megan Allen netted three and Willow Cooper found the back of the net once.

With the victory, the Panthers (1-0) extended their current winning streak to five matches dating to last year’s 4-0 finish in an abbreviated season that was shelved after four matches because of the COVID-19 pandemic.

Ferrum has tallied 78 goals in those five matches, an average of 15.6 goals-per-match.

The Monarchs (0-1) closed the difference to five goals, 8-3, before the Panthers responded with a four-goal, end of half surge that featured two scores by Cooper and one each by Kaitlyn Harley and Micaela Harvey (Franklin County).

Reynolds, Allen and Harley accounted for 10 goals and two assists.

“(It) was a good first game, we got off to a great start,’’ Ferrum head coach Karen Harvey said. “The second half was a little stagnant, but our defense cme through when we needed it.

Ferrum’s Amanda Thomas logged all 60 minutes in net and registered one save.

Two of the Monarchs’ three first-half goals were scored in man-up situations.

RALEIGH, N.C.—Devin Noonan used an assist from teammate Scott Philipp and threaded the back of the net with 12 seconds remaining to give William Peace (N.C.) University its first win of the season Saturday, a 6-5 non-conference men’s lacrosse triumph over Ferrum College at WakeMed Soccer Park.

The Panthers (1-1), who suffered their first loss of the season, rallied from a three-goal deficit with a three-goal, fourth-quarter surge.

The goals were netted consecutively with Malachi Maxwell tallying two of the scores.

Two goals by Philipp produced the Pacers’ 5-2 lead after the Panthers had pulled to within one, 3-2, following Derek Farwell’s third-period score.

William Peace claimed possession of 31 ground balls to 28 for Ferrum, collected 12 saves to 10 for Ferrum, won nine face offs to five for Ferrum and was 1 of 1 in man-up scoring chances to Ferrum’s 0 of 4 showing.

Despite finishing its first spring football regular season with consecutive setbacks, Franklin County has advanced to post-season play for the…

Ferrum College first baseman Matt Yarborough defends the bag as a North Carolina Wesleyan College players takes his lead off base during Tuesday's match-up between the Panthers and the Bishops, won by N.C. Wesleyan, 10-8, at W.B. Adams Field. Yarborough has been selected Old Dominion Athletic Conference Player of the Week in baseball.

Ferrum College's Brady Hentz (front) sprints past a Roanoke rival and she advances the ball to midfield for the Panthers.