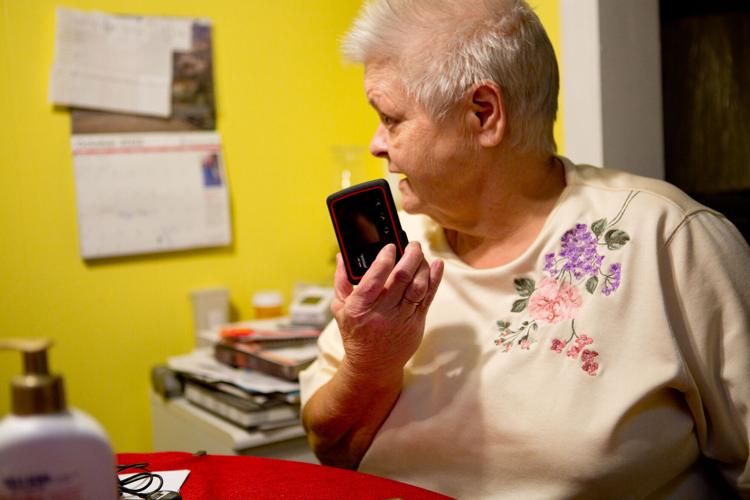 Jerline Guilliams shows off a mobile internet device that her phone company sold her due to the poor phone service in her area in Callaway. 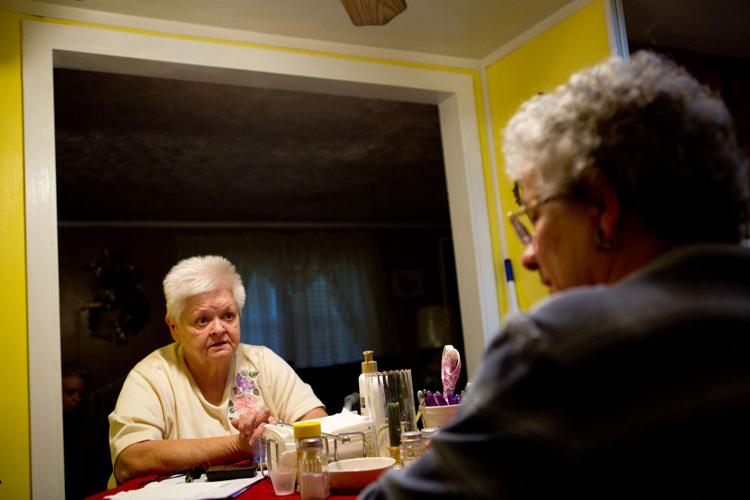 Guilliams, left, and her neighbor Kathy McCulley, right, talk with a reporter about phone service problems in their area. 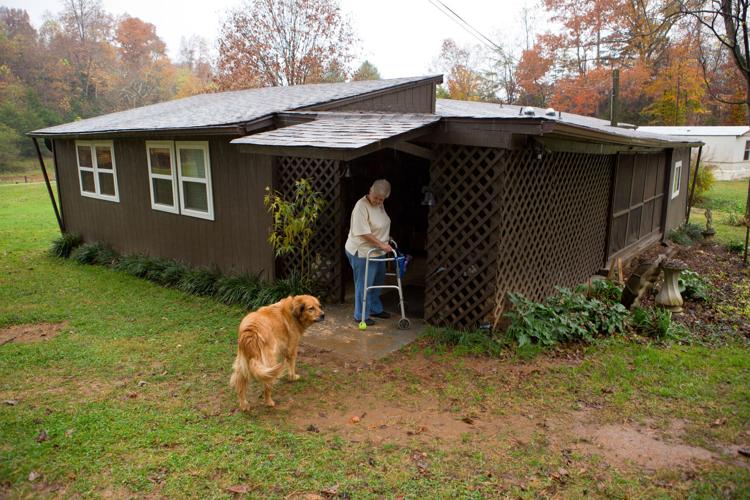 Jerline Guilliams walks with her dog Lady outside her home in Callaway. 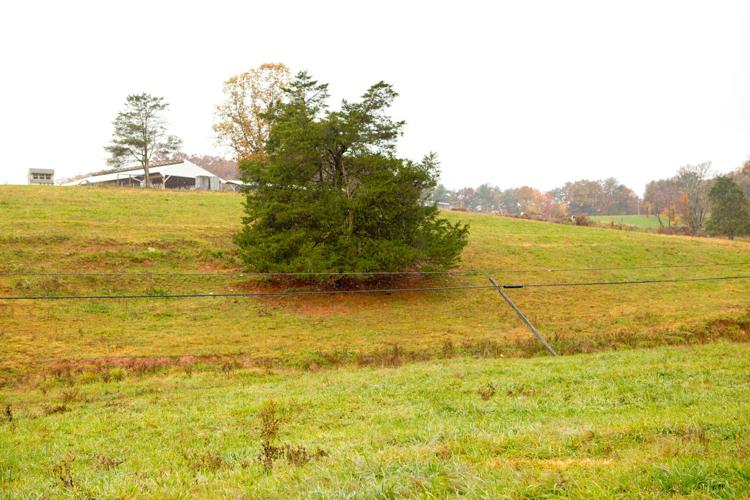 A utility pole leans heavily toward the ground in the 4200 block of 6 Mile Post Road on Oct. 31.

Four or five years ago, Jerline Guilliams got fed up with unreliable phone and internet service to her home in Callaway.

She switched providers, but would still like to return to her old home phone plan under CenturyLink.

“But I don’t want to pay a whole lot for something that doesn’t work,” she said.

For years, CenturyLink customers in Franklin County and across Virginia have experienced home phone service issues, forced to wait days between reporting a service issue and getting it fixed, only for it to go right back out.

Brightspeed, the company that recently acquired CenturyLink’s phone and internet lines, has promised to do better. Franklin County residents like Guilliams are skeptical. The infrastructure has changed hands many times, Guilliams said, but none seem willing to do the necessary maintenance.

At the root of the problem is the copper network Brightspeed and its predecessors have relied on to bring phone and internet service to most of Franklin County.

Originally used to provide phone service, many copper networks also now give internet connection, although only at slow speeds. Unlike overhead power lines, copper cables and lines — including those in Franklin County — are almost always buried underground.

Decades after being installed, though, Franklin County’s copper networks are starting to show their age.

Guilliams said she wouldn’t mind Brightspeed digging up her yard if it meant they would fix the copper buried underground.

“I’m not that mean,” Guilliams said, laughing. “I don’t think anyone would say anything if they dug up their yard to figure out what’s wrong.”

And as far as Guilliams is concerned, that’s the obvious solution.

“We need to run new lines,” she said.

So far, Brightspeed hasn’t made any promises with respect to Franklin County, specifically.

In April, after receiving dozens of service complaints from residents and elected officials in various counties, the Virginia State Corporation Commission approved CenturyLink’s request to transfer its network to Brightspeed — with some conditions.

Perhaps most importantly, Brightspeed must test all of its copper cable routes in Virginia and identify cables with a “higher-than-normal occurrence of trouble.”

“This data will be used to identify cables to be rehabilitated or replaced thereby resulting in fewer future customer outages. As the cable routes are tested, issues identified will be remedied,” the approval stipulation said.

The April stipulation stated the company was “currently focusing” on copper network cables and working lines in Albemarle, Buckingham, Hanover and Rappahannock counties. Additional cables in other counties will be rehabilitated or replaced, “depending upon the analysis and need for rehabilitation.”

The company must also report to the commission its planned and actual progress in ongoing confidential reports.

Lately, Brightspeed has been making significant investments to build fiber broadband infrastructure in states like North Carolina. Wireless and fiber-based networks are taking over in lots of places, but copper still has value to rural areas like Callaway; copper network landlines still operate during power outages and the phone signal isn’t compromised by hilly terrain.

“We don’t currently have any near-term plans to build fiber in the [Franklin County] area, but will pursue grant opportunities to help us expand our build plans where it makes sense,” the Brightspeed spokesperson wrote.

In the meantime, the April stipulation also requires Brightspeed to give the commission a monthly report of service disruption and restoration data to prove it is meeting certain minimum service requirements. If it fails to meet the requirements for three consecutive months, the commission may implement a corrective action plan.

So far, that seems to have helped.

“Brightspeed has experienced a higher number of outages in the last few weeks, primarily due to weather issues and/or fiber cuts from construction, but we also completed a variety of improvements on the lines to improve service,” the Brightspeed spokesperson wrote. “We are always striving to do better for our customers, and we have already significantly improved our response time for repairs in the area by nearly 50% since August.”

In the end, only time will tell how or if Brightspeed improves its network infrastructure in Franklin County.

Jerline Guilliams shows off a mobile internet device that her phone company sold her due to the poor phone service in her area in Callaway.

Guilliams, left, and her neighbor Kathy McCulley, right, talk with a reporter about phone service problems in their area.

Jerline Guilliams walks with her dog Lady outside her home in Callaway.

A utility pole leans heavily toward the ground in the 4200 block of 6 Mile Post Road on Oct. 31.