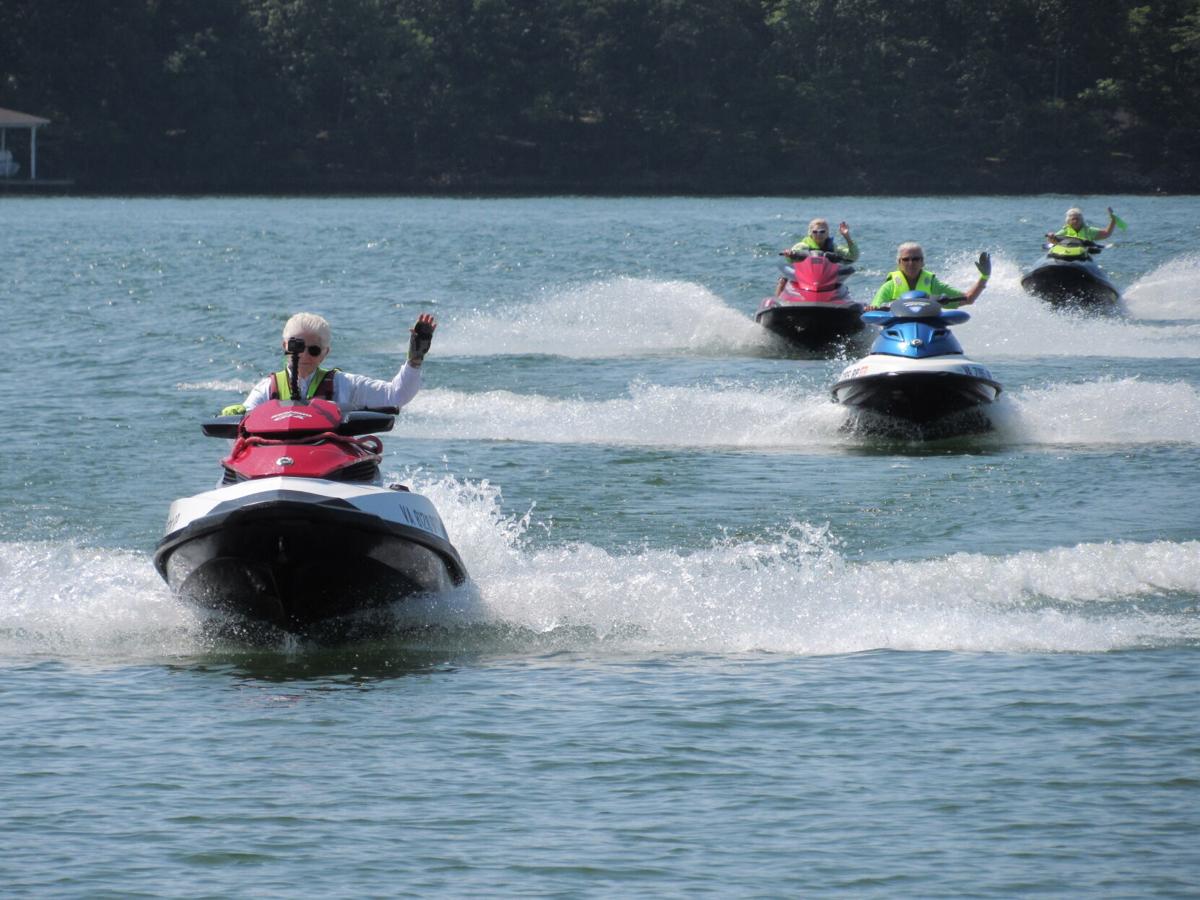 She Doos arrive at Mariners Landing for their 20th anniversary celebration Aug. 5. 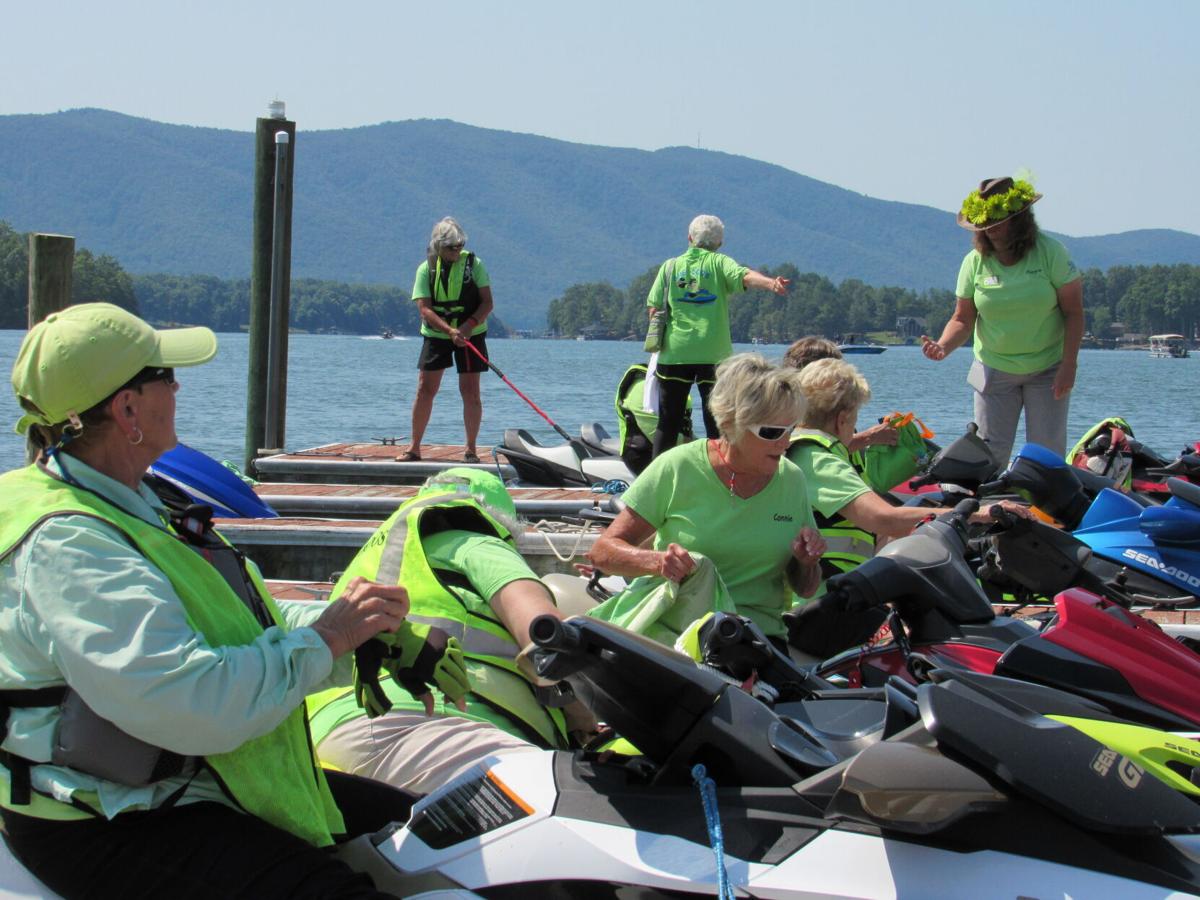 She Doos members pull into the boat slips at Mariners Landing on Aug. 5. 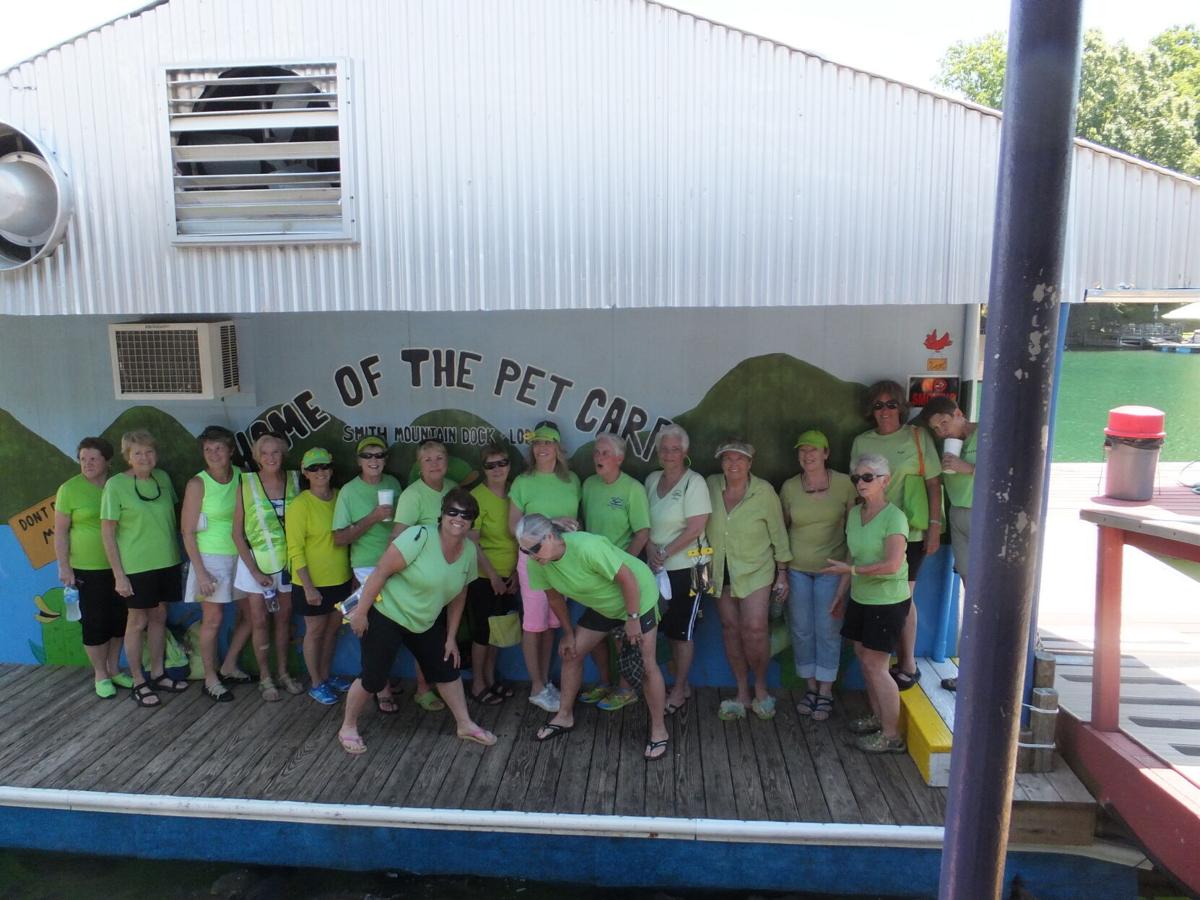 The She Doos during an outing to what was formerly Smith Mountain Dock and Lodge. It is now know as The Dock at SML. 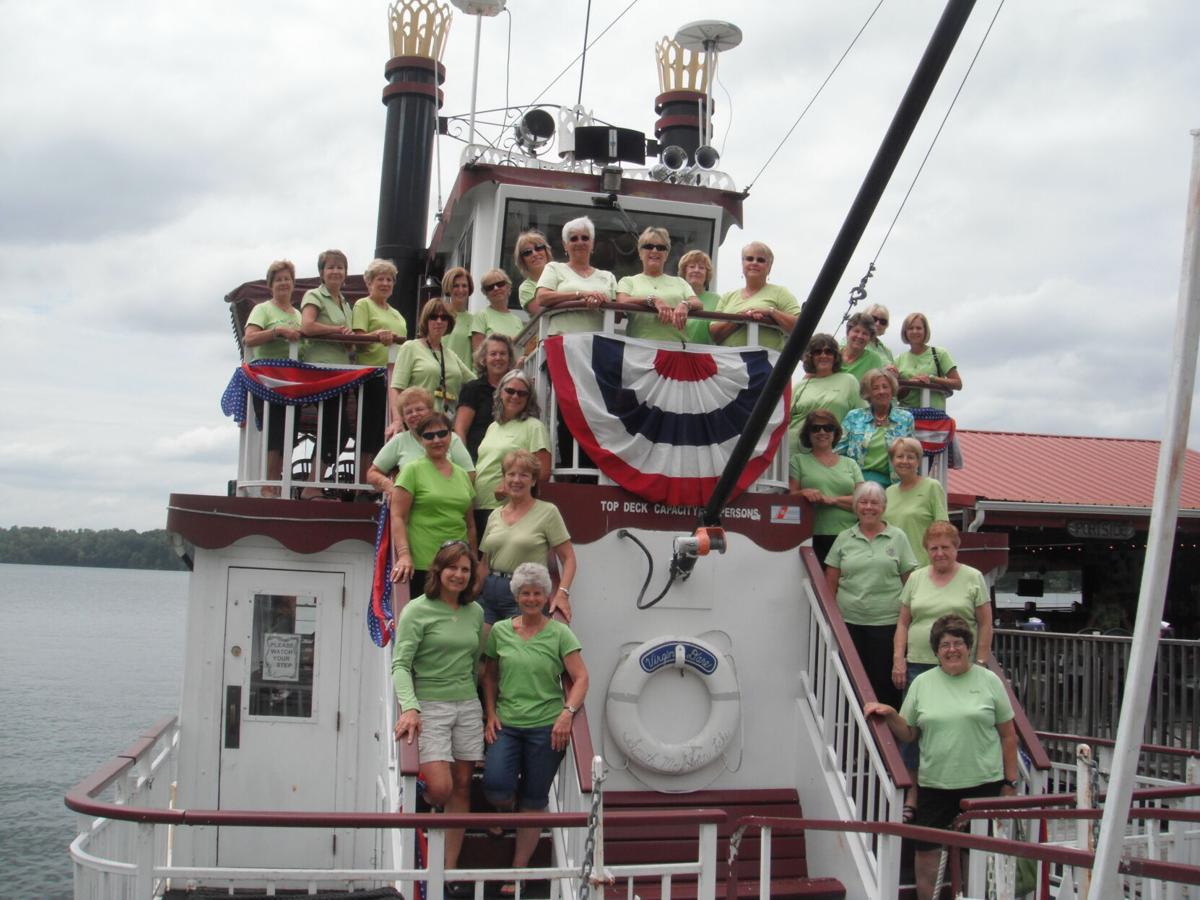 She Doo members pose for a photo aboard the Virginia Dare.

In Smith Mountain Lake’s 55 years of existence, it is unlikely that any other group has gained a more iconic status than the She Doos. The all-female personal watercraft riders have made a name for themselves exploring every inch of the lake’s 500 miles of shoreline all while having fun and giving back to the community.

The She Doos marked 20 years on the lake last month with a celebration at The Landing Restaurant at Mariners Landing on Aug. 5. A group of nearly 40 riding single file on PWCs cruised into the docks for the event — a sight that has become commonplace around the lake every Thursday during the summer.

What eventually would become the She Doos was launched in 2001 by an informal group of women looking to get a better understanding of how to get around on the lake. DeeDee Bondurant was one of those original members. She said many of the ladies, including herself, first met as volunteers on the Smith Mountain Lake Home Tour.

“I for one was new to Smith Mountain Lake and for sure didn’t know my way around the vast shorelines, kind of holding a fear of not finding my way home,” Bondurant said. “A call from some others that may have had the same issues also wanted to learn the waterways of SML and learn how to be safe on our PWCs. It was the old adage ‘safety in numbers.’”

It wasn’t long before word got out about the group. Bondurant said the number of women interested in joining started to explode in the next few years to a point that members created a set of bylaws that included a cap on membership to 40 ladies and a minimum age limit of 50.

It was in those early years that the name She Doos was first coined by Bondurant’s husband. It is a play on the name of the popular Sea-Doo brand of PWC.

The She Doos also created dues for members of $25 a year. Since they were put in place, the group has collected more than $17,000, which has been donated to local nonprofits including the Smith Mountain Lake Marine Volunteer Fire Department.

Another decision in those early days was to split the group into five pods. Each of the pods consists of eight members from a certain location around the lake. Every Thursday during the summer each of the pods members gather before they all cruise to an area of the lake to meet the other pods for a group outing.

Over the years the She Doos have picked a variety of islands around the lake as a meeting place before going to a final destination, usually for lunch. Bondurant said they always give advanced notice to restaurants to assure they can handle a group of 40 ladies coming ashore all at once.

In addition to gathering for a bite at local eateries, the She Doos have also made an appearance at multiple lake events in the past 20 years. Donning the iconic lime green shirts and lime green feather boas, the She Doos have been a participating team in the annual SML Chili Festival, constructed a boat for the SML Cardboard Boat Regatta and were even extras in the movie “Lake Effects” that was filmed at the lake in 2010.

Leading actress Jane Seymour can be seen in the movie riding on the back of Bondurant’s PWC in one scene. The group also participated in another scene at Bernard’s Landing that required some late nights to film.

Bondurant joked that she still gets an occasional royalty check due to her appearance in the movie, though she admitted it isn’t very much.

While the She Doos have been in the public eye with their participation in several events, those in the group would list gatherings and parties at members’ homes and docks as some of the best memories. The ladies have occasionally held games during the summer that included activities on PWCs. They also gather each year for Halloween and Christmas parties.

“It’s kind of like a sisterhood,” member Terri Shea said of the group.

The ladies come from several different states and a variety of backgrounds. Shea said they come together for the common goal of learning how to navigate the lake and meeting some new friends.

Marlene Truesdell joined the She Doos in 2004 after hearing about them from Barb Dzadony. Truesdell admitted she had never ridden a PWC before joining the group, but thought it looked like a fun group to join.

During her time as a She Doo, Truesdell has not only learned how to ride a PWC but also how to navigate the lake. Most all She Doo members have traveled extensively around the lake and can easily find their way around.

“I could probably draw a map of Smith Mountain Lake in the dark,” Bondurant said of her knowledge of the lake.

Dzadony agrees that the She Doos have helped her to get around on the lake. She joked that she probably has a better idea of where things are on the lake than her husband. “We laugh because I tell him where things are,” she said.

When first arriving at the lake from Pennsylvania, Dzadony said she was intimidated at its sheer size. She said joining the She Doos gave her the confidence to explore.

While most of the She Doos have now been members for many years and have a substantial knowledge of the lake, not too many are willing to stop riding with the group. Many members are nearly 80 years of age and have no intention of giving up their membership.

Truesdell has had two hip surgeries and five back surgeries over the years but never considered giving up on the She Doos. “I plan on riding until I can’t ride anymore,” she said.

Dzadony said the weekly rides during the summer help her to stay active. They also give her a reason to get out on the water as other people her age often begin taking their boats and PWCs out less and less to enjoy the lake.

“As we get old we take for granted that we live at this beautiful lake,” Dzadony said. “It gets me out there every Thursday.”

During the Aug. 5 celebration, Bondurant discussed how the friendships formed through the She Doos have seen many of them through “sickness, sadness, personal issues and so much more.” She said the ladies in the group have come together to create lasting memories.

“Who knew that when we moved to the lake to start over we would build a new life and add so much to our memories,” Bondurant said.

Center Stage Catering, Inc. recently announced that it will be opening a new restaurant in Rocky Mount. It will be called The Porch.

The Town of Rocky Mount will be holding the Sidewalk Sale tomorrow.

Tent goes up outside hospital

An outdoor climate-controlled tent was set up adjacent to the emergency department at Carilion Franklin Memorial Hospital on Monday.

A Rocky Mount girl has donated more than 200 pounds of pet food and supplies to the Franklin County Animal Shelter.

A lawsuit that challenges the taking of private land for the Mountain Valley Pipeline remains pending in an appeals court.

The following land transfers were registered in Franklin County in July (with the seller, the buyer, the date, the location and the amount of …

An outdoor homecoming celebration will be this Sunday at Franklin Heights Church in Rocky Mount to celebrate the church’s founding in 1960. Sp…

With the 4-3 decision, construction will begin on the new Glade Hill Volunteer Fire-EMS Station after 10 years of planning and debate.

She Doos arrive at Mariners Landing for their 20th anniversary celebration Aug. 5.

She Doos members pull into the boat slips at Mariners Landing on Aug. 5.

The She Doos during an outing to what was formerly Smith Mountain Dock and Lodge. It is now know as The Dock at SML.

She Doo members pose for a photo aboard the Virginia Dare.