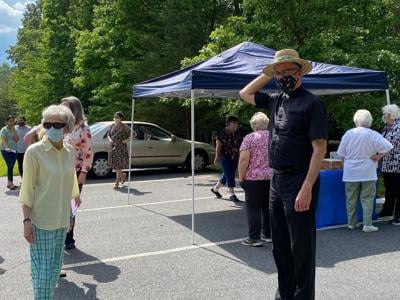 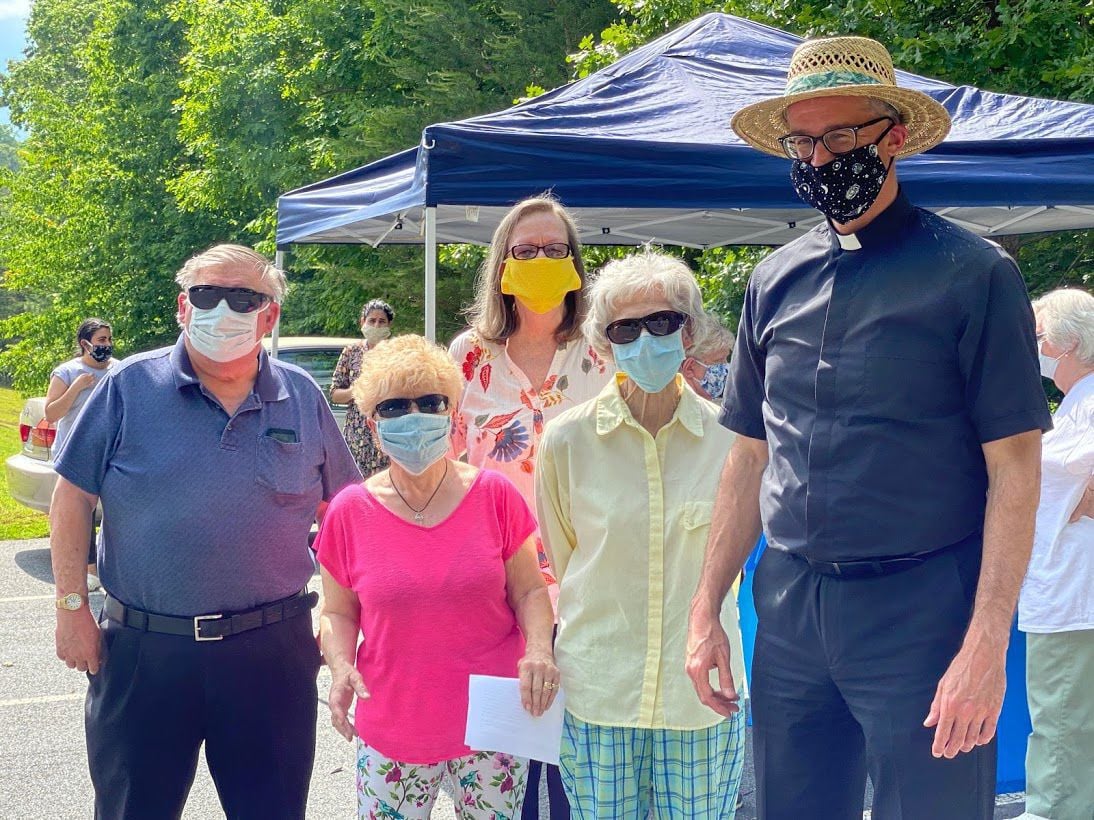 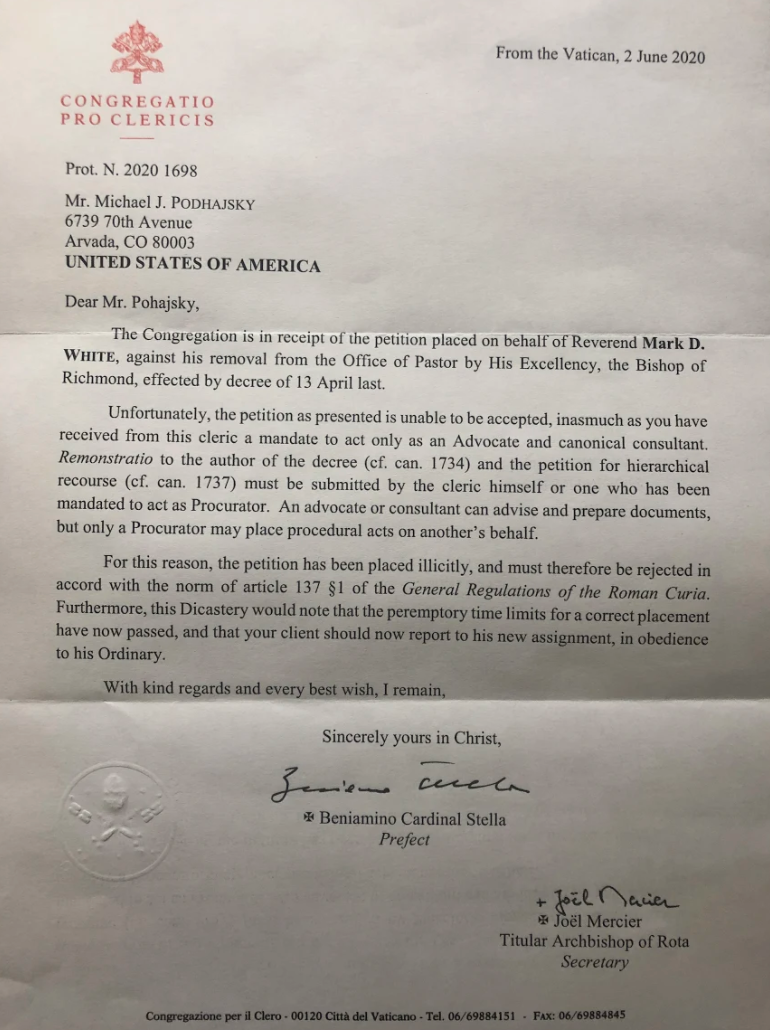 A letter from the Vatican denies Father Mark White’s appeal. 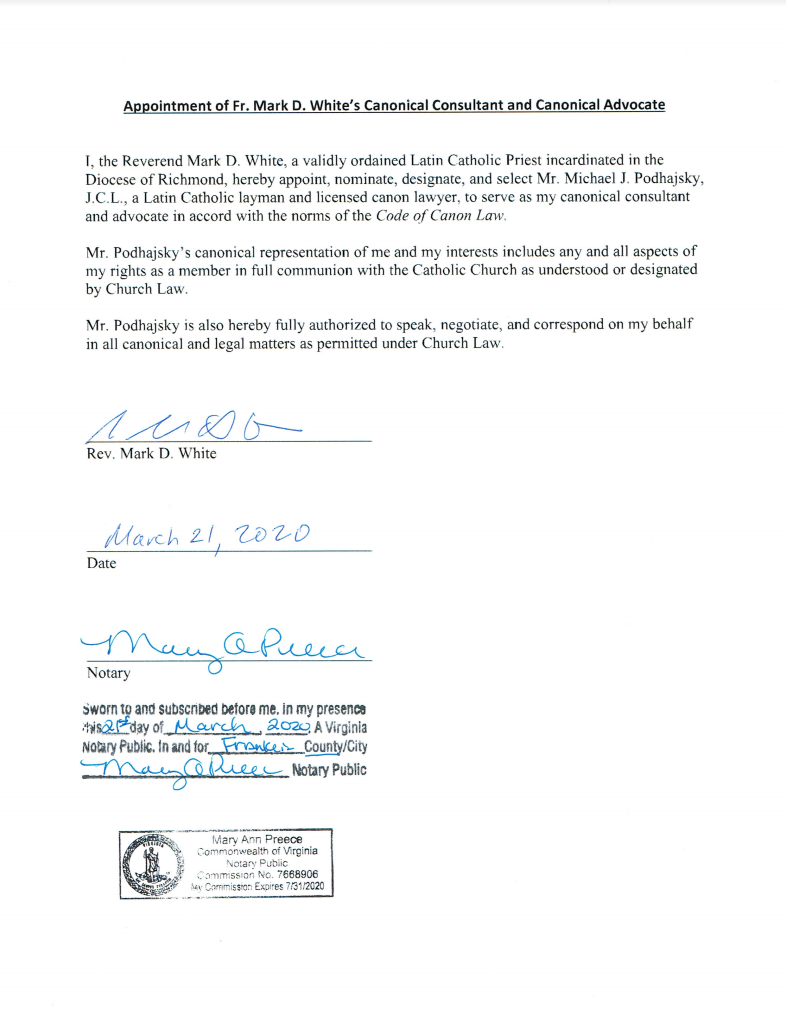 Vatican refuses to consider White’s appeal because White failed to name his lawyer as his “procurator.” 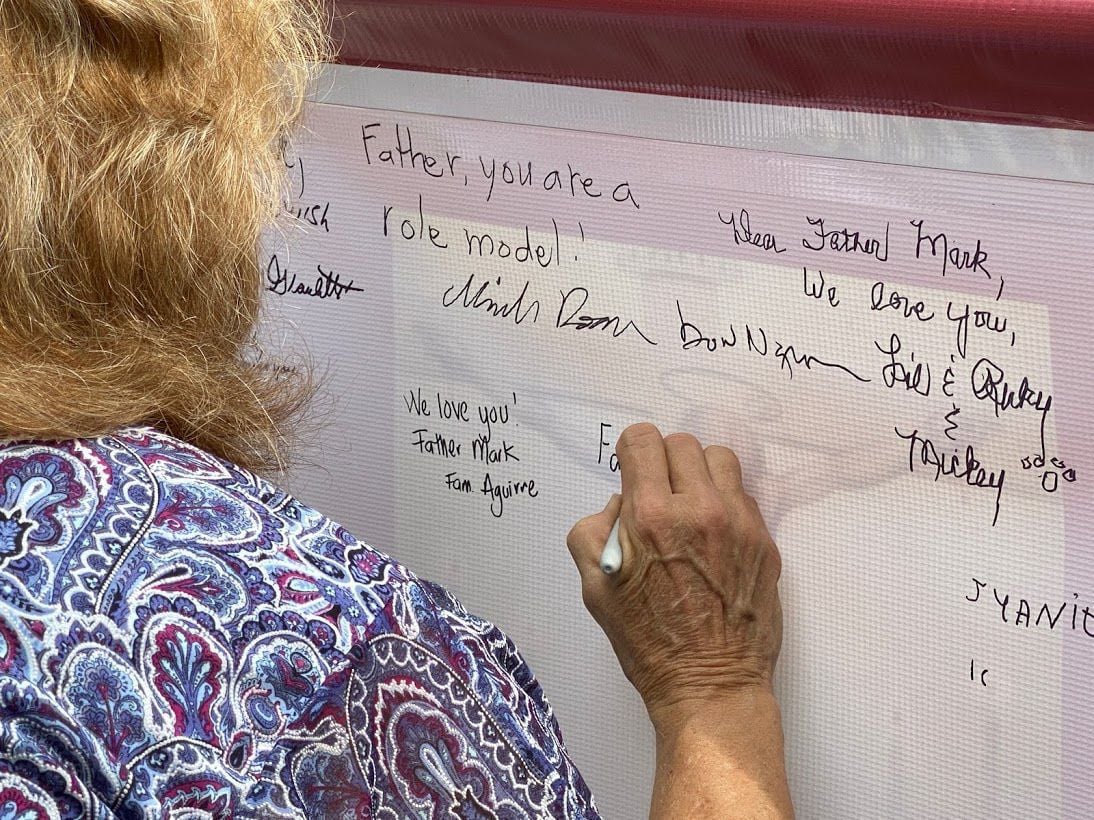 Parishioners at St. Joseph in Martinsville sign a wall of support for their priest, Father Mark White. 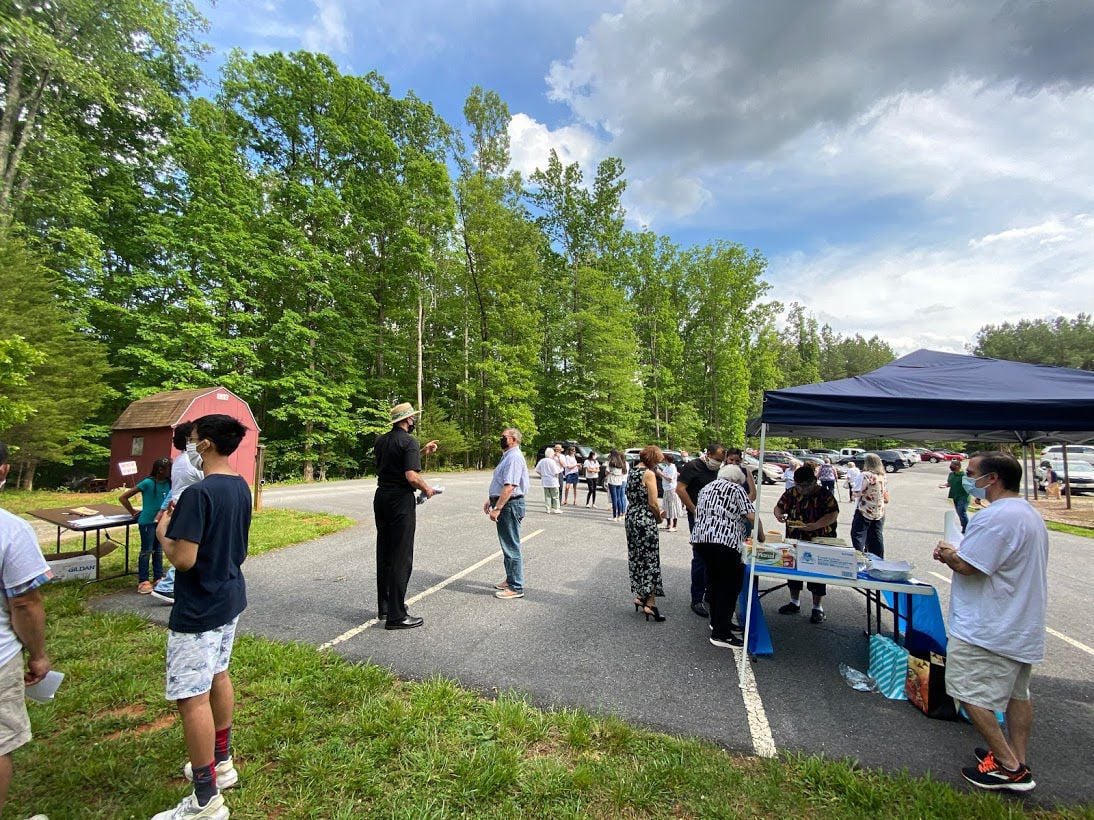 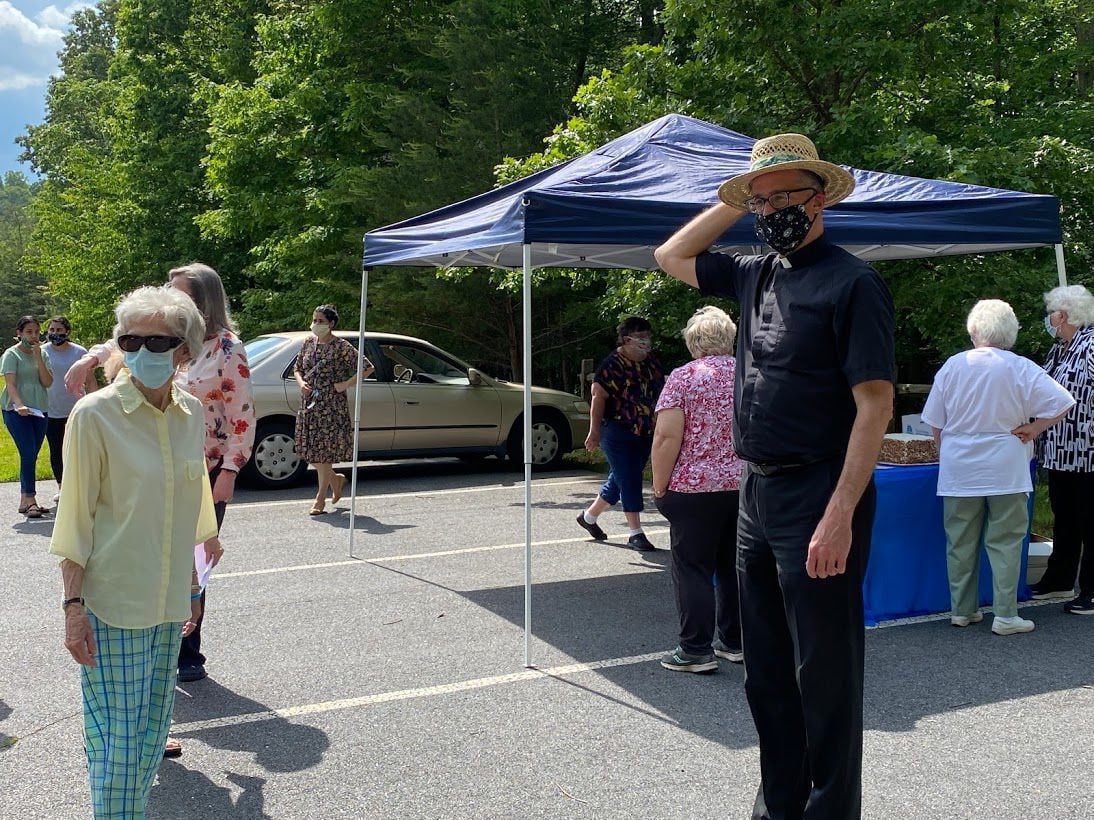 The word has come down from the Vatican in an appeal by the suspended Catholic Priest Father Mark White of a decision by the Bishop of Richmond to strip him of his pastoral duties, and that word also means White’s appeal likely has run out of time.

Those may sound like cliches, but, according to a letter dated June 2 from Prefect of the Congregation for the Clergy Beniamino Stella, they appear literally true and mean White’s appeal never was considered and now probably won’t be.

“Unfortunately, the petition as presented is unable to be accepted, inasmuch as you have received from this cleric a mandate to act only as an Advocate and canonical consultant,” Stella wrote to White’s canon lawyer, Michael Podhajsky.

The letter explains the appeal only will be accepted if it comes from White or someone he designates as a “procurator.”

White updated the parishioners of St. Francis of Assisi in Rocky Mount and St. Joseph in Martinsville with the news.

“The cardinal [Stella] noted that my lawyer’s first submission in the case omitted one word, a word I myself had never heard before: ‘procurator,’” White wrote in his blog. “According to the Cardinal, that omission of one word has nullified our entire case.

“I think it’s safe to say someone invented the term ‘technicality’ for situations just like this.”

To make matters worse, Stella notified Podhajsky that the time limit for filing an appeal had now passed, indicating an amended appeal would be dismissed as well.

Stella wrote that White should report to his new assignment according to the instructions of Richmond Bishop Barry Knestout.

Those instructions require White to relocate to Abingdon and take up residency at the Jubilee House, a Catholic retreat and conference center.

Knestout had stated it was his intention to have White serve in some capacity as a prison minister.

Armed with the strength of the Vatican’s denial of White’s appeal, Knestout now says the restoration of White as a priest is conditional upon White’s complying with a decree he issued in November.

“Reverend Mark White is to cease from this moment in disseminating his opinions by means of any social media: in print, by audio, or video, or any digital means,” the decree states. “Any previous posts are to be removed from all social media, and the account is to be closed.

“In the exercise of his pastoral office, Father White is to refrain from all assertions against, or judgments about, the hierarchy of the Church.”

Such opinions are at the heart of this months-old dispute between White and Knestout.

White complied at first, but when the coronavirus pandemic hit, and the church doors were closed, White asked if he could resume blogging as a means of communicating with his parishioners.

Knestout did not respond to the request, so White defied the command to cease and desist, and the strained relationship between Knestout and White deteriorated further.

“The pope says we stand for human rights, honesty and openness. I can’t betray our ideals by giving in to this.”

Requests for additional comment this week from Knestout drew no immediate response.

White turns 50 years old today. He entered the seminary for the Archdiocese of Washington in 1997 and spent the summer of 1999 in a special seminary program in Nebraska.

It was there he realized the rest of the world was not like Washington, where priests were plentiful.

White was ordained in Washington in 2003 and served as a parochial vicar (assistant pastor) and then as pastor in the Washington area for eight years.

In early 2011 he asked to be assigned to an area in dire need of priests.

That’s when he received the assignment to become the priest in both Rocky Mount and Martinsville.

In 2015 White was assigned to Roanoke, with the task of serving two parishes there. The arrangement didn’t work as well as it did in Martinsville and Rocky Mount, so White returned to his assignment at St. Francis of Assisi and St. Joseph.

“And now Bishop Barry Knestout has tried to railroad me right out of the priesthood,” White wrote in his blog. “By sheer irrational cruelty.”

In an act that surpasses the denominational boundaries of Christians, the Rev. Nicholas Hull and 12 members of the Christ Episcopal Church in Martinsville, representing the Church’s Clergy and Vestry, penned an open letter in support of White.

“The growing tension between Fr. Mark White and the Diocese of Richmond has been impossible to ignore, and it saddens us to see how this has hampered your ministry within our community,” they wrote. “Now that Fr. Mark’s dismissal has made national headlines, there are multitudes of narratives pointing fingers in every conceivable direction.

“We feel that as outsiders, yet allies of your Church, we are called to offer our limited but honest perspective on this painful controversy.

“Unfair blame has been put on Fr. Mark White for creating tension and straining the ministry of the Roman Catholic Church in our community. This controversy stems from the sexual misconduct of ex-Cardinal Theadore McCarrick and the Church’s response to his sins.

“Through Fr. Mark’s talks at our Church, and through private conversations, it was clear that he was not only deeply hurt by the actions of Theodore McCarrick, but also by the Church’s response to this controversy.

“In all of our interactions, he has never seemed spiteful, hateful, or vengeful, but disappointed and sad in a Church that he has dedicated his life to serve, much how a spouse might feel hurt after discovering their beloved partner was unfaithful.

“In a strange way, Fr. Mark’s passion, vulnerability, and honesty in discussing his disappointments has increased the respect and rapport of the Roman Catholic Church in our community…

“Although Fr. Mark White was critical of the Church, it was abundantly clear that he was still dedicated to remaining its servant.

“The forces that tried to silence Fr. Mark White claimed they were motivated out of a desire to preserve and protect the Church; however, from our perspective, they have achieved the opposite.”

In a letter written to Knestout on Monday, White writes: “I mean no offense when I point out to you that everyone has the right to communicate with his or her fellow human beings … you do not have the authority to compel my silence in this manner.”

On Tuesday, White wrote directly to the Vatican, apologizing for failing to use the word “procurator” in his appeal.

“I did ‘fully authorize’ Mr. Podhajasky to ‘speak, negotiate, and correspond on my behalf in all canonical and legal matters as permitted under Church Law,’ so while the word ‘procurator’ did not appear in the original mandate, I nonetheless gave Mr. Podhajsky the essential powers of a procurator, in plenty of time to take recourse within the preemptory deadlines,” wrote White.

White pointed out that the merits of his case deserve at least to be heard and failing to do so leaves the problem unresolved.

White explained that he was unable to report to his new assignment as instructed by Stella because he is suspended as a priest.

“Bishop Knestout indicated that he will not restore my priestly faculties unless I remove my weblog from the internet,” White wrote. “As your Eminence knows, everyone enjoys the natural right to communicate with his or her fellow human beings, to engage in public discourse and debate.

“Only the cruelest tyrannies try to suppress this right by unjust compulsion ...

“Please forgive my presumption on your time and attention. But I must insist that your Congregation consider the merits of this case in full… This “now constitutes a serious scandal among the people of this region. Archbishop Christophe Pierre, Apostolic Nuncio to the United States, Bishop Knestout himself, and the provincial Archbishop, William Lori, of Baltimore, have received correspondence from many quarters on this matter.

“This correspondence, from Catholics and non-Catholics alike, will verify the danger of scandal that exists here, should my case not receive a fair hearing on the merits.”

Now Father Mark White can only wait in hopes of a more favorable consideration this time.

The bishop and his priests gather in Richmond every year to celebrate Mass together and to reaffirm their solemn promises in a ceremony called “Chrism Mass.”

This year that event will take place on July 10 at the Cathedral of the Sacred Heart.

White will not be allowed to participate because Knestout has prohibited him from publicly celebrating the sacraments.

Parishioners from St. Francis of Assisi in Rocky Mount and St. Joseph in Martinsville will have buses departing that day from both churches for anyone wishing to stand with White on the sidewalk outside the cathedral as Knestout and the priests of the Richmond Diocese walk by.

“I will stand in silent vigil,” White said. “The injustice cries to heaven.”

Bill Wyatt is a reporter for the Martinsville Bulletin.

A letter from the Vatican denies Father Mark White’s appeal.

Vatican refuses to consider White’s appeal because White failed to name his lawyer as his “procurator.”

Parishioners at St. Joseph in Martinsville sign a wall of support for their priest, Father Mark White.