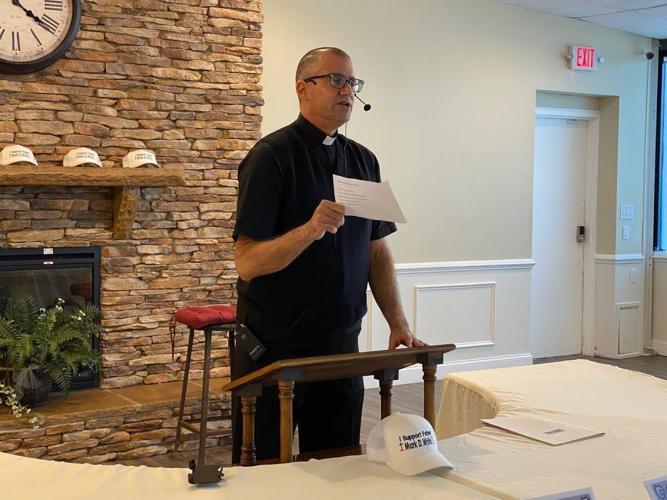 Father Mark White speaks to group about his new book. 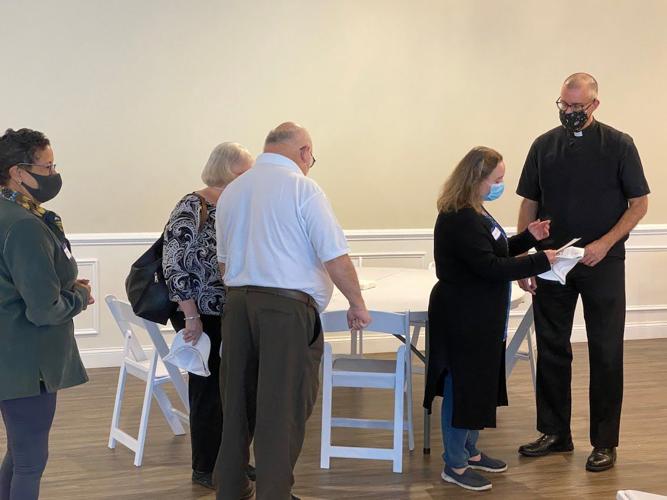 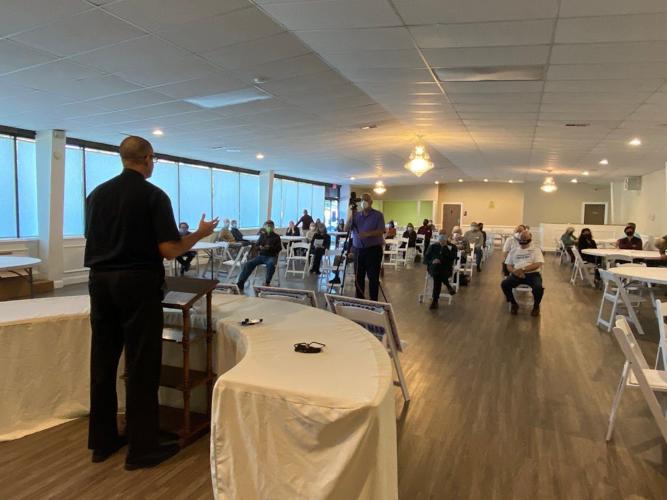 White, who was ousted as priest of St. Joseph’s Catholic Church in Martinsville and St. Francis of Assisi in Rocky Mount because of a dispute with his bishop, spoke to a group of approximately 40 socially distanced attendees Sunday afternoon at the Grand Fiesta Venue in Ridgeway about a book that he says should be finished in the next two weeks.

“I’ve missed you,” White said. “This is a difficult time — to contend with this virus and this blow to our faith at the same time is a great challenge.”

White referred to the news last week of the Catholic Diocese of Richmond’s agreeing to pay $6.3 million to 51 people who as children were sexually abused by clergy members.

“One of the victims was on TV,” White said. “She was grateful for the money, but she longed for justice, which she called ‘the free exchange of information,’ sharing of information by authorities — and that has not occurred to this day.”

White was ousted from his parishes because of a protracted conflict with his superior, Bishop of Richmond Barry Knestout, about posts on his popular blog that were critical of the church hierarchy’s handling of sexual abuse. Knestout told White to cease publishing the blog or lose his job. White stopped for a few months but resumed — after seeking permission without reply — during the pandemic.

White has blamed the church’s hierarchy of keeping sexual abuse within the church hushed as “the fundamental source of scandal,” and an “inexplicable reticence to share information.”

White’s book is titled “Ordained by a Predator,” and the first chapter is “The Summer of 2018.”

White told the audience that this is when he learned Cardinal Theodore McCarrick, the man who had ordained him in 2003, had been suspended for sexually abusing a minor.

“That was hard for me to take in,” White said. “I started to see things from the victim’s view and believe that the time for beginning a quest for justice and healing had come.”

White said he had been blogging for several years, and the content was mostly homilies and maybe a comment about his favorite sports teams.

“I wrote an open letter to McCarrick,” White said. “He had gone into hiding — to this day no one knows exactly where he is.”

Without an address, White decided to publish the letter on his blog.

“That’s when it [the blog] started getting attention,” White said. “Then I wrote an open letter to the Pope, and that’s what really got me in trouble.”

Spotlight on the church

Knestout, White’s superior, had shared an apartment with McCarrick and was his personal secretary in Washington D.C., when White was ordained by McCarrick.

It was just the year before, in 2002, that the Boston Globe had published results of an investigation that led to the criminal prosecutions of five Roman Catholic priests and put the problem of sexual abuse of minors by Catholic clergy in the national headlines. The paper won a Pulitzer Prize for the reporting, which was documented in the Academy Award-winning moving “Spotlight.”

“It [the report] produced very intense anti-Catholic sentiment all over the country, and there was a lot of anger vented against the Catholic Church — anti-Catholic bigotry,” White said.

In 2002, White said he had the same attitude as the church hierarchy, but in 2018 he realized that that was wrong.

“No one was looking at it from the victim’s point of view, and the bureaucrats of the church have crookedly tried to protect their power,” White said.

Chapter 2 is titled “What I Think Happened with McCarrick” and Chapter 3 is called “The Cronies vs. the Church We Believe In.”

“This is where I get into the mafia,” White said. “There is something crooked going on. There is no other real explanation.”

White said he has had the privilege of discussing this at length with what he described as “a network of whistle-blowing priests” who have opened up to him.

“I am not alone,” White said. “Same thing with nuns that have been suspended and marginalized. It has helped me to understand the whole thing better.”

The second anniversary of an announcement by the Holy See regarding a comprehensive report on the misdeeds of McCarrick has come and gone, and yet the Vatican has not officially released it.

Chapter 4 is titled “The Bishop Knestout Affair” and details White’s recall of Bishop Knestout’s demanding that White remove his blog from the internet. The two have argued about the blog — and White’s right to add content to it — since November of last year.

Knestout sent an email to the parishioners of St. Francis and St. Joseph’s, advising them that White had been removed as their pastor in April.

“I lost my job, my home and my [church] family by one man who was mad at me and for no good reason,” White said.

White did not mince words Sunday afternoon when speaking about the highest authority of the Catholic Church.

“Do I want to say the Vatican is crooked?” White asked. “Catholics love the Pope. That’s what makes you Catholic, but that’s where we are.

“We cannot trust the Pope.

“Corruption is a painful word, but that is the only word to use.”

The final chapter is called “Justice for Father Mark.”

“Knestout has vast resources of the entire Richmond Diocese, and Father Mark only has us,” St. Francis of Assisi parishioner Joe Kernan said. “If we do nothing, that’s what will happen.”

St. Francis of Assisi parishioner Judy Rogers said she wanted her church life back like it was.

White said he intends to complete his book in about two weeks.

“Good Lord willing, this will be a book, and God will send a publisher,” White said. “This book will have a lot of information — we need facts and evidence to build up the movement. We have to find a path where we hold faith and act out of love.”

White began and ended his discussion with prayer.

“The truth has power,” White said. “What will win the day is patience, kindness and doggedly seeking out the truth.”

A little over a year after scrapping plans for a solar farm in Westlake, Energix US is proposing one at a new location in Wirtz. The company w…

Three James Madison University students, including two from Richmond, were killed in a crash Thursday night in West Virginia.

The chase was featured Friday on Reelz TV’s “On Patrol,” which features live action involving law enforcement agencies around the country.

Don’t be alarmed, in the coming weeks, if you’re driving through the Shenandoah Valley on Interstate 81 and you come upon a convoy of aging am…

Pulaski County authorities released more information Thursday about an altercation earlier this week that left one man dead and another injured.

Father Mark White speaks to group about his new book.