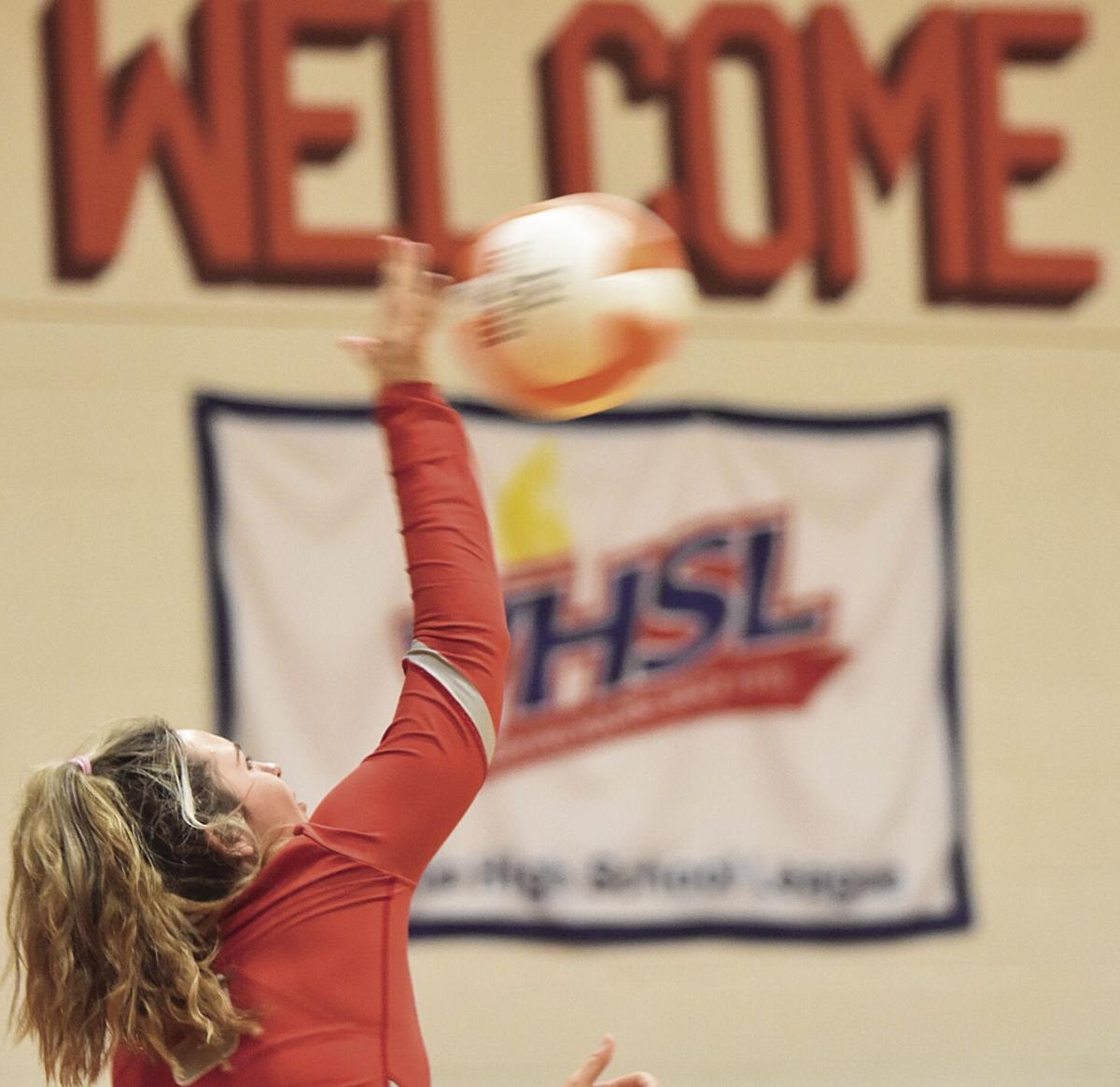 Franklin County's Laken Adkins serves for the Eagles in the first set of their 3-0 Blue Ridge District volleyball victory over William Byrd last Thursday in Vinton. 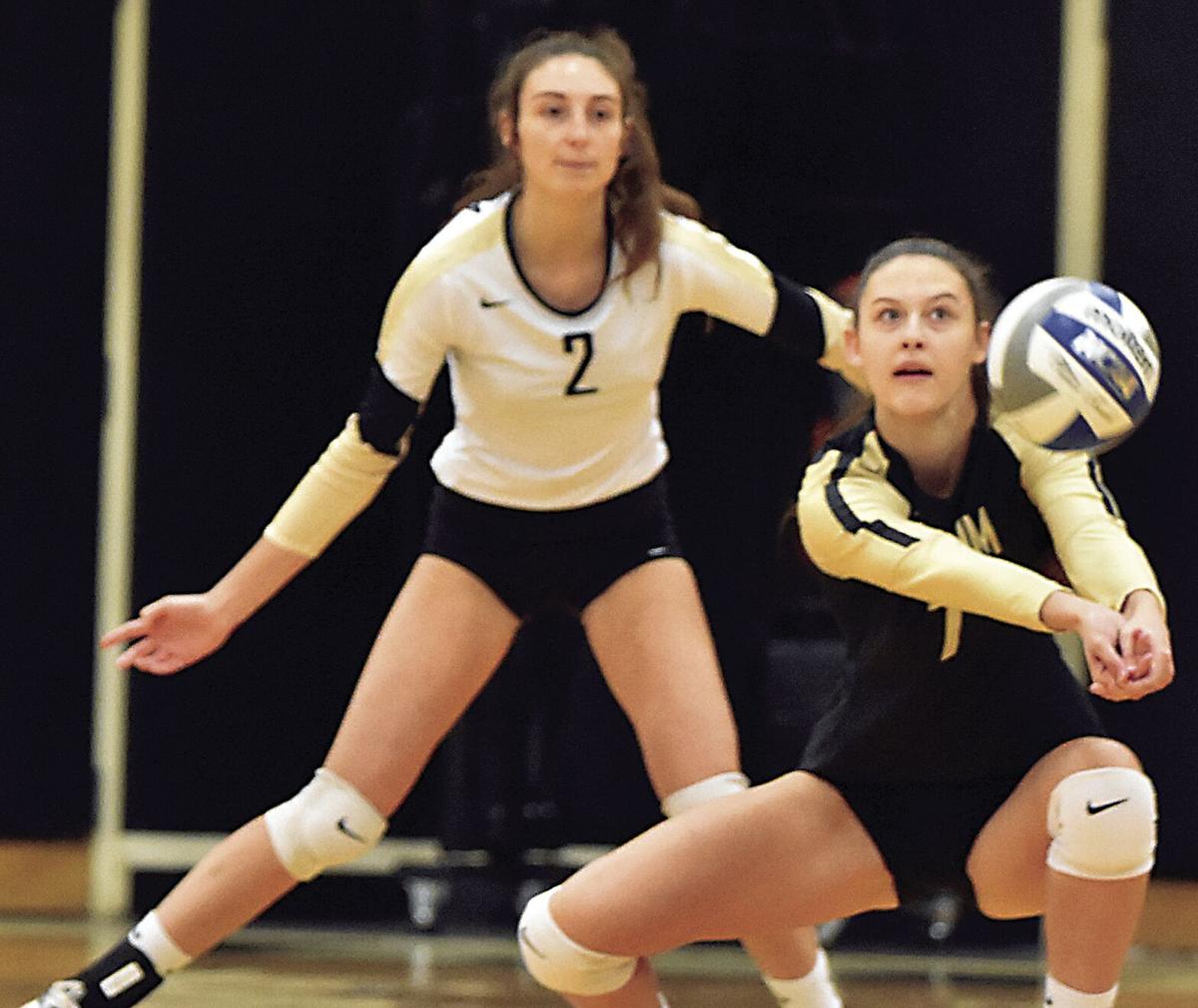 From there, Eastern Mennonite outscored Ferrum, 12-4.

Ferrum led 5-2 at the start of the second set before Eastern Mennonite tallied nine of the next 15 points to produce a stalemate at 11.

The Panthers took a 14-12 lead following a Taylor Joyner kill off an assist from Shelby Waltrip.

The Royals erased that deficit with a 5-0 run, then they outscored the Panthers 8-5 to take a 2-0 match lead.

Eastern Mennonite led 7-2 at the start of the third set before Ferrum responded with a 6-1 run to square the count at 8.

Half of those six points were netted courtesy of two Savannah Walker aces and a Joyner kill.

The Panthers attempted to rally and got late-set kills from Waltrip, Saryn Penell and Joyner before the Royals secured the win with Paris Hutchinson’s kill on match point.

An ace by Arielle Tritt completed the run.

In the third set, Bluefield State (4-7) rallied for the victory.

With the set tied at 20, the Big Blue tallied five of the last seven points to cut their set deficit to 2-1.

Bluefield State built a 7-1 edge in the fourth set, then Ferrum netted 10 of the next 13 points to move in front.

Rymer netted two kills during the run and Samantha Kircher and Taylor Joyner each registered one.

Ferrum’s lead was short-lived; however, as Bluefield State responded with a 10-3 run.

Trailing 20-14, the Panthers produced another rally, one that proved to be the last one of the match as Ferrum tallied 11 of the set’s last 13 points.

BLACKSBURG—Ferrum College opened its 2021-2022 season Saturday serving as co-host along with Virginia Tech of an Intercollegiate Horse Show Association (IHSA) competition at the Alphin-Stuart Livestock Center.

The competition was the Panthers’s first in more than a year because of the COVID-19 pandemic.

“We were excited to be back to regular-season IHSA competition after such a long break,’’ Ferrum head coach Margaret Cornwell said.

“(The) competition was a point rider only show which makes the classes more competitive. We had a few learning moments, but, overall, our riders rode well and held their own.’’

The Generals scored 425 to capture the men’s title, followed by Roanoke College (409) and the University of Lynchburg (256).

The Generals tallied 410 points to claim the women’s championship, followed by Roanoke (264) and Lynchburg (253).

The meets begin at 4 p.m. at the William P. Swartz Gymnasium pool.

ASHLAND—Randolph-Macon College scored twice in the first quarter, twice in the second stanza and produced a quintet of goals in the third period Saturday in a 9-0 Old Dominion Athletic Conference (ODAC) field hockey shut-out victory over Ferrum College at Nunnally Field.

The five-goal, third-period surge was achieved in fewer than four minutes of elapsed time.

Four of Randolph-Macon’s goals were produced by an assist.

The Eagles’ victory is their second this season over the Terriers.

The Eagles complete regular-season play this Thursday at home against Northside.

The Blue Ridge District’s postseason tournament is scheduled for Tuesday (Oct.18) and Thursday (Oct. 20) of next week and Wednesday (Oct. 27) of the following week.

All matches are played at the site of the higher seed.

Christian Heritage Academy’s middle school volleyball has advanced to the quarterfinals of the Virginia Association of Christian Athletics volleyball tournament with a 2-0 victory over Faith Christian School of Roanoke in a play-in match Monday night.

The Knights are scheduled to face Timberlake Christian Friday at Faith Christian Academy-Hurt, which is the site for all remaining rounds of the tournament—the semifinals and finals are set for Saturday.

The tournament, named in honor of long-time Ferrum golf coach Ray Corron, who died in Oct. 18, 2018, is a fundraiser for the Panther Club and benefits all of Ferrum’s sports programs.

Reservations are required and registration as soon as possible is encouraged.

The winning team receives a cash prize of $400.

Players can enter as a team or as an individual who will be assigned to a team.

Prizes will be awarded immediately following the tournament.

All participants receive a complimentary gift.

In addition, there will be special contests such as Closest to the Pin and Longest Drive.

There will be no playoffs. Ties are broken by a draw of the scorecards.

Mulligans are available for purchase for $20 a foursome—there is a limit of one per player.

A mulligan can be used on any stroke except a tee shots on par 3 holes.

It is asked that checks be made payable to Ferrum College Athletics.

Cornhole tourney is slated for Saturday

The singles tournament has a cash payout of $100 and $50 for first and second place.

How’s this for a fast start?

Franklin County's Laken Adkins serves for the Eagles in the first set of their 3-0 Blue Ridge District volleyball victory over William Byrd last Thursday in Vinton.