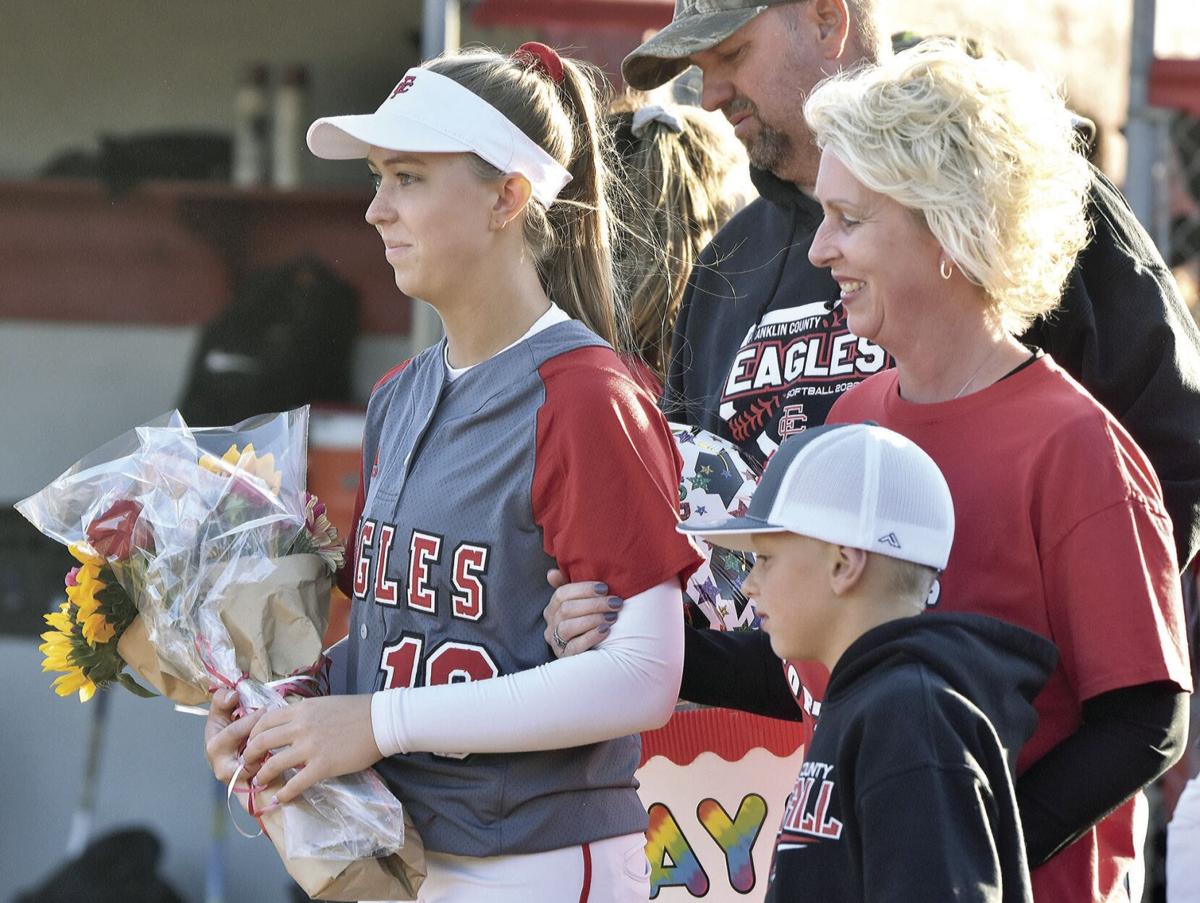 Franklin County’s Taylor Anderson and her immediate family are honored on Senior Night prior to the start of the Eagles’ varsity softball win over William Byrd. 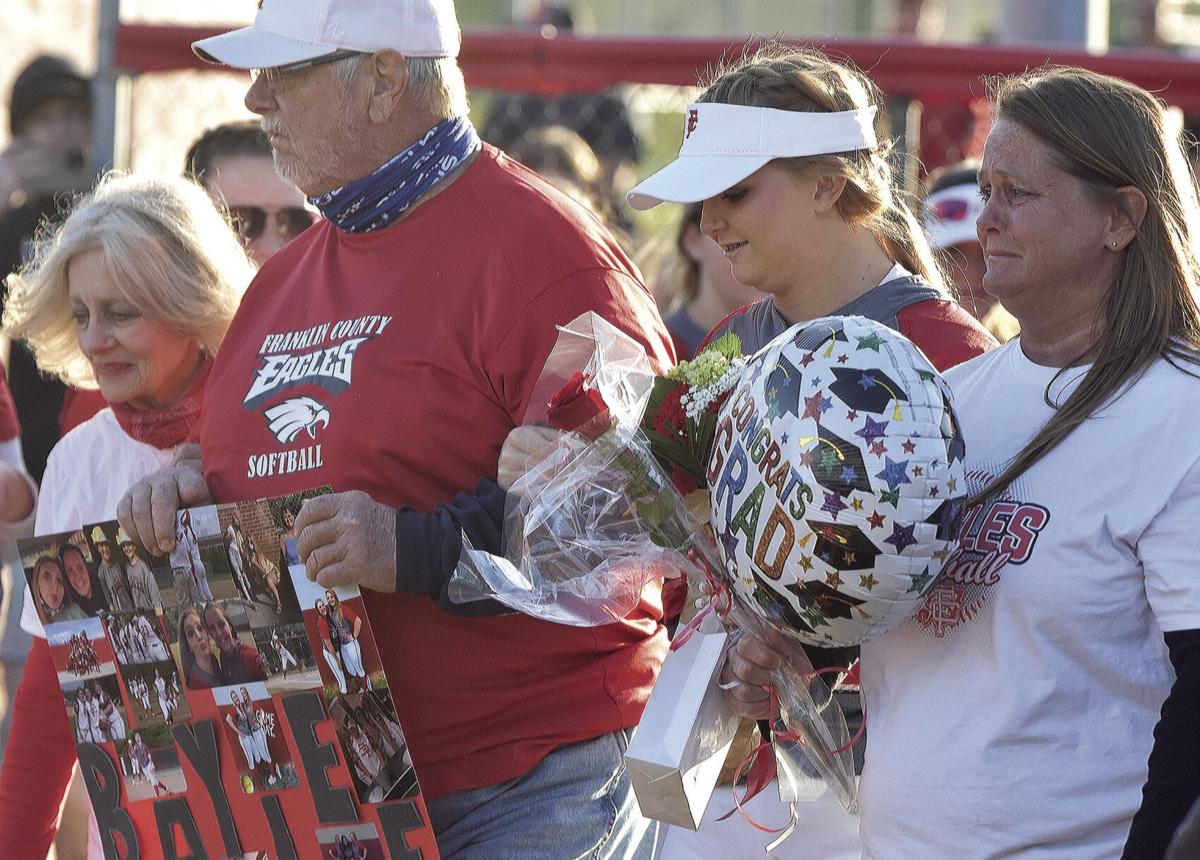 Franklin County senior Baylee Greer and her immediate family are honored on Senior Night prior to the start of the Eagles’ varsity softball win over William Byrd. 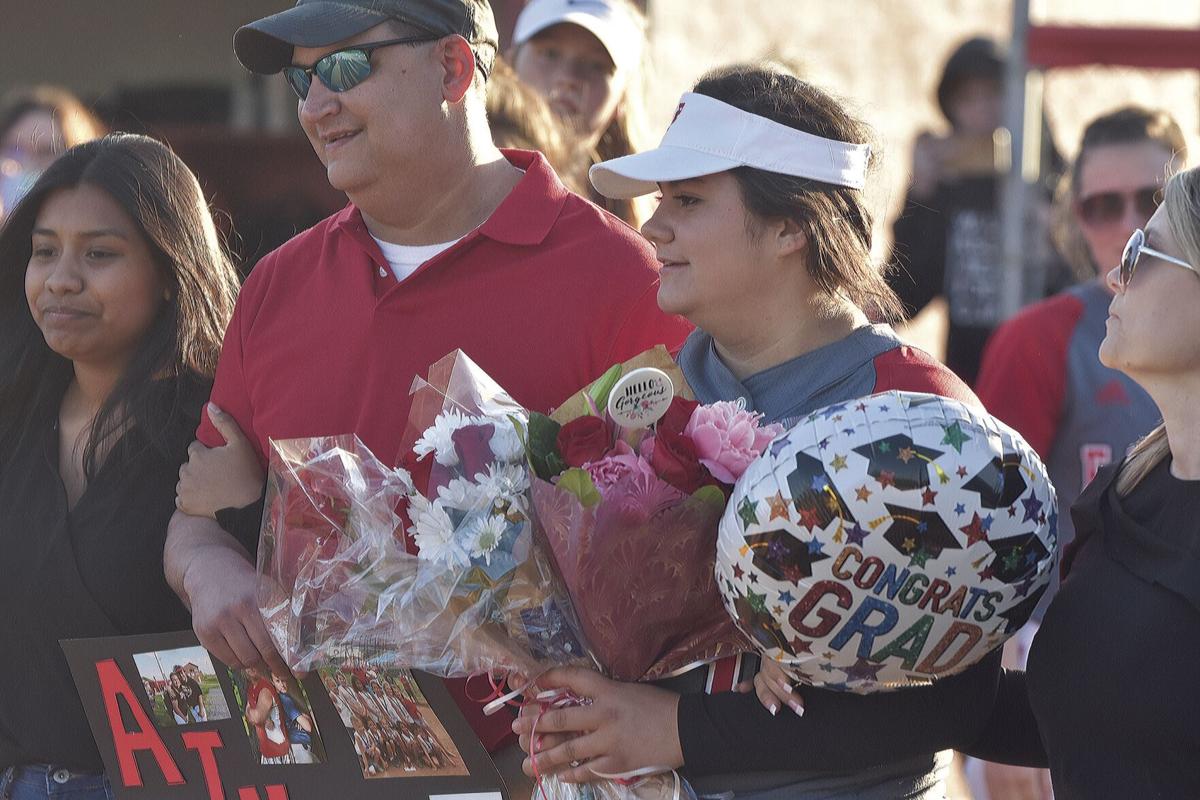 Ainsley Walker and her immediate family are honored on Senior Night prior to the start of the Eagles’ varsity softball win over William Byrd.

FLOYD—Freshman Kaylee Manning and junior Ashleigh Dillon, a pair of right-hand pitchers, combined on a no-hit shutout Monday as Franklin County routed Floyd County, 15-0, in a non-district varsity softball contest on the road.

The contest was stopped after six innings.

The Eagles (3-1, 2-1 in the Blue Ridge District) benefited from 13 hits and four errors by the Buffaloes.

The Eagles pitching duet was a walk and an error shy of combining for a perfect game.

Manning started and worked five innings, throwing 33 pitches and facing 17 batters. She walked one and struck out six.

Dillon tossed a perfect sixth, throwing five pitches, all strikes, and facing three batters. She struck out one.

Baylee Greer paced the Eagles’ offense by going 3 of 5 at the plate with five RBIs. She drove in a run with a single in the fifth and belted a grand-slam home run in the sixth.

Also driving in runs in the sixth inning were Dillon, Laken Adkins and Alexis Campbell.

FCHS led 3-0 after two innings and 5-0 through four frames, courtesy of a three-run second and a two-run third.

The Eagles raised the count to 7-0 after scoring twice in the fifth and completed the triumph with an eight-run sixth.

Dillon, Taylor Anderson, Courtney Bryant and Sage Campbell each contributed one hit to the victory.

The Eagles staged their Senior Night, honoring their three seniors- Taylor Anderson, an outfielder, Baylee Greer, a catcher/pitcher, and Ainsley Walker, an outfielder, and their immediate families—in a pre-game ceremony.

FCHS (2-1, 2-1 Blue Ridge District) trailed 6-3 through 3/1 innings before rallying for four runs in the bottom of the fourth to erase the deficit and five runs in the last of the fifth to craft a 12-6 advantage.

The Terriers scored their final run in the top of the seventh before the Eagles secured the victory.

Of the Terriers’ hits, two were for extra bases: a double and a triple.

Four players collected multiple hits for the Terriers—each with two- and three others had one hit.

William Byrd led 4-0 after the first inning, using a base hit to manufacture one of those runs.

FCHS scored three runs in the bottom of the frame to cut the gap to a run, 4-3.

The Eagles took advantage of one of the Terriers’ errors in the last of the fourth, the stanza in which they tied the count.

Freshman Kaylee Manning worked three innings of relief to earn the win. She permitted one hit, one walk and one run, which was earned. She struck out four

Anna Smith started inside the pitching circle for the Eagles. She allowed 10 hits, one walk and six runs, all earned, while striking out one.

William Byrd employed two pitchers. Its starter surrendered two hits and three runs in two innings. Its reliever was tagged with the loss after allowing seven hits, four walks and nine runs, four of which were earned in four innings. She struck out two.

Delaney Foley was 2 of 3 at the plate with four RBIs. She drove in runs with a double in the first inning, a walk in the fourth and a base hit in the fifth.

Anderson, a first-team Class 6 All-State player in 2019, collected the Eagles’ other extra base hit: a double.

Laken Adkins drove in a run with a sacrifice fly.

The teams combined to strand 14 runners on base: six by William Byrd, eight by FCHS.

The Eagles (3-0, 1-0 Blue Ridge District), led by head coach Joshua Cox, have defeated William Byrd three times this season; they have outscored the Terriers 35-6 in those games.

FCHS and William Byrd have one more game scheduled this season: Tuesday, May 25 in Vinton. That contest is a Blue Ridge District match-up.

‘The contest was stopped after 3 1/2 innings.

The Eagles (2-0-2, 2-0-2 in the Roanoke Valley Middle School District) scored six runs in the bottom of the first, three in second and one in the third.

Right-hander Aleah Davis tossed a complete-game, two-hit shutout. She walked one and struck out nine.

Davis faced 15 batters. She threw 52 pitches, 37 of which were strikes.

Two players accounted for Hidden Valley’s hits—each with one.

Davis was 3 of 3 at the plate with a single, double and a triple; she was a home run shy of hitting for the cycle.

Only two BFMS players struck out.

Ingram stole a base for the Eagles.

Eight of BFMS’s runs were earned.

The teams combined to strand nine base runners: six by BFMS, three by Hidden Valley.

FERRUM—After serving as Ferrum College’s second head men’s wrestling coach, Ryan Riggs has resigned from the post to take over the reins at th…

Franklin County completed regular-season play Thursday with an 18-11 triumph over Christiansburg in a boys varsity lacrosse match staged at C.…

Farm Bureau infielder Asher Meeks (No. 10) has a hard time getting a grip on a ground ball as shown in a series of photos from play in last we…

Barnes farms for a living, races for thrill of it

SOUTH BOSTON—Jason Barnes is immersed in one of the toughest, labor-intensive occupations there is – farming.

Franklin County’s Taylor Anderson and her immediate family are honored on Senior Night prior to the start of the Eagles’ varsity softball win over William Byrd.

Franklin County senior Baylee Greer and her immediate family are honored on Senior Night prior to the start of the Eagles’ varsity softball win over William Byrd.

Ainsley Walker and her immediate family are honored on Senior Night prior to the start of the Eagles’ varsity softball win over William Byrd.